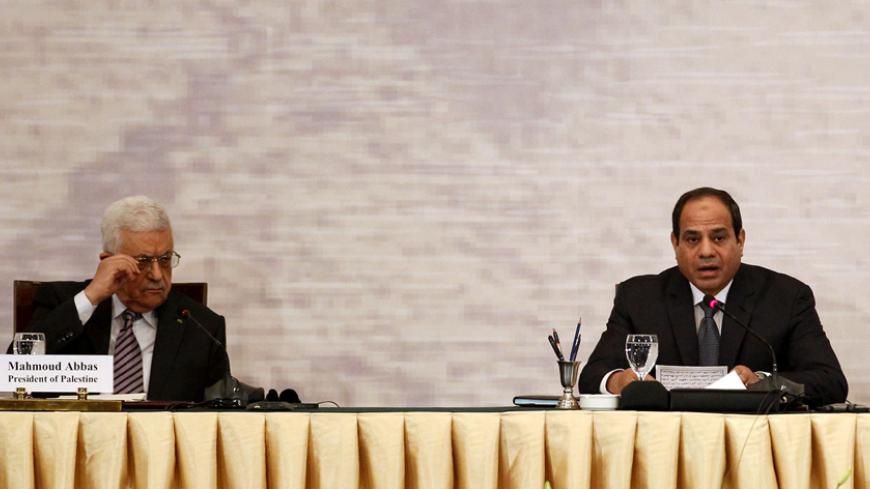 Palestinians have always felt like the forgotten and neglected party in the Middle East — not a state, occupied by Israel and sidelined by the Arabs. Abu Alaa (Ahmed Qurei), the former Palestinian prime minister and chief negotiator of the 1993 Oslo Accord, recited once in Oslo an Indian poem: "I am alone, you are alone, let's be alone together."

Well, 21 years later, Palestinians and Israelis still sense their isolation but separately. On this note, a senior Fatah official in Ramallah told Al-Monitor that the Palestinian leadership feels completely sidelined these days, both in the region and within the international community: "In Israel, the Palestinian issue is the forgotten issue of the elections, even by the left, and in the United States, there seems to be little political will to engage on permanent status after the elections. Meanwhile, the European Union is too weak to move alone on Palestinian statehood and the Arab countries are focusing almost solely on the challenges that the Islamic State [IS] poses to them in the wars in Syria and Iraq as well as the Iranian challenge."

According to this official, the Palestinian leadership is contemplating how to deal with this situation. He claims that the region and the world will hear about Palestine in two forms come April 2015. The first new front line would be a "diplomatic intifada," calling on international and regional frameworks for conflict resolution and statehood, based on international law. This diplomatic attack will be followed by a nonviolent popular intifada that will combine more demonstrations around settlements, the separation wall and East Jerusalem.

He said, "This is the time for independence either by diplomacy as a kind of a war of independence."

Talks I held in Ramallah led to the impression that the Palestinian leadership feels a sense of desperation from the evaporation of the Palestinian issue. On the other hand, there is awareness about the need for self-reliance, taking their destiny into their own hands. Given this mood, there are many in the Fatah leadership that openly prefer a Likud Party victory in the upcoming March 17 Israeli elections. In a turn-about way, they believe that a government of Benjamin Netanyahu and Naftali Bennett would make both strategies of diplomacy and nonviolent intifada more effective.

Accordingly to the Fatah official, the only country that projects to the Palestinians a sense of solidarity and responsibility nowadays is Egypt.

A senior Egyptian official who is posted at the Arab League headquarters in Cairo told Al-Monitor that both Egypt and the Arab League are poised to launch a diplomatic campaign in favor of Palestinian statehood once the next Israeli government is formed. According to the source, who is closely linked to the Egyptian Foreign Ministry, such a campaign would consist of several components.

The source explained that an essential component and condition for such a campaign would be the weakening of Hamas in Gaza through stricter control of the Rafah crossing and through efforts to politically delegitimize it. The campaign will also consist of lobbying the Gulf countries for economic assistance to Palestinian President Mahmoud Abbas.

These measures should facilitate efforts at the highest levels to coordinate with the United States an international framework for peace talks based on the Arab Peace Initiative and conditioned on a full freeze of settlements. It would also require coordination with the leading EU countries on a draft proposal — possible language for a new UN Security Council resolution that would serve as a terms of reference for any such peace process.

The campaign will include issuing a warning to the next Israeli government that, while the Egyptian-Israeli peace treaty is considered a strategic asset and interest by Cairo, it might be endangered by an Israeli refusal to move toward a permanent status agreement within a reasonable period of time.

The official added that both the Egyptian and Arab League leaderships were coordinated with Abbas, and would like to offer him a horizon of hope to prevent violent deterioration. This Egyptian policy is part of a more regional strategy designed to secure anew Egypt's leading role in the Arab world, also in fighting Islamic terrorism (Hamas and IS), while presenting a nationalistic image on the pivotal Palestinian issue.

When asked about these positions of Cairo and the Arab League, the Ramallah official said that the Palestinians are indeed fully in the picture, and that Abbas considers the relationship with President Abdel Fattah al-Sisi a strategic axis for the advancement of Palestinian statehood. From Abbas' diplomatic point of view, the centerpiece should be the Arab Peace Initiative, legitimizing any pragmatic Palestinian policies.

Be that as it may, the Israeli government is currently focused on cutting the losses on the Congress speech fiasco of the prime minister. It is clear, even to Likud ministers, that relations with President Barack Obama and the Democratic Party have been severely damaged. And from that angle, the situation does not bode well for US-Israeli coordination after the elections in the wake of the already planned Cairo-Ramallah initiatives.