While Palestinian officials partially welcome the idea of a P5+1 framework for multilateral negotiations, Israeli Prime Minister Benjamin Netanyahu's associates count on the Americans to nip this idea in the bud. 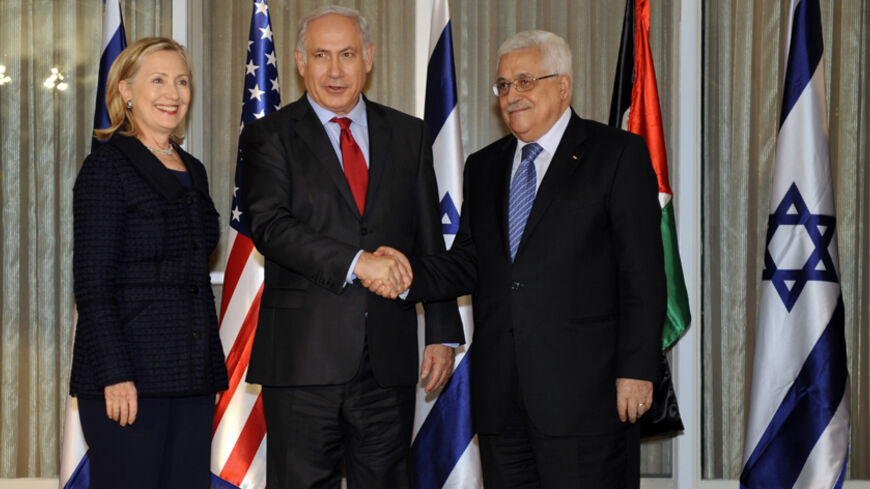 "[Israeli Prime Minister] Benjamin Netanyahu has switched the clock of the peace process back to the pre-Oslo days. Peacemaking in the Middle East will not be the same in the future," senior diplomatic sources in Paris tell Al-Monitor. They contend that bilateral negotiations are out of the question, unilateral moves are unhelpful, and therefore we must return to multilateral efforts.

There was great disappointment in European capitals with the Obama-Netanyahu meeting on Oct. 1. While the White House slapped the Israeli prime minister in the face with the formal condemnation of settlement construction in East Jerusalem, nothing much was achieved in terms of the renewal of the peace process. The Europeans, mainly France and the United Kingdom, are concerned that the emphasis on the fight against the Islamic State (IS) will lead to a hibernation of Middle Eastern peace efforts.

In transatlantic contacts, State Department officials admitted to their European counterparts that US President Barack Obama has virtually given up on the chances for a viable peace process as long as Netanyahu is in power. Israeli "settlement first" policy is so far achieving its goals. Yet, European sources say there is too much at stake at the core of the Middle East and that a transformation of the peace process is necessary. Also in Washington, policy analysts on the Middle East team are looking for innovative ways to resuscitate peace hopes.

Both the Europeans and Americans foresee that without such innovative efforts, a variety of doomsday scenarios are possible, from a violent intifada, mega-terrorism against Israel and even open warfare between Israeli and Palestinian Authority security forces. They are also very much aware that leaving the bleeding Palestinian wound open is detrimental to the efforts to stabilize the broader region.

Given these dangers on one side, and the inability to persuade the parties to engage in negotiations on the other, one can hear intensifying voices in the European corridors of power in favor of internationalization of the resolution of the Israeli-Palestinian conflict. "The Middle East is too important to leave to the Middle Easterners," said a senior source in Brussels, who communicated these sentiments to Washington last week. According to him, the Americans are at least listening.

The speech by Palestinian President Mahmoud Abbas on Sept. 26 and Netanyahu on Sept. 29 at the UN General Assembly were for all intents and purposes the official divorce of the odd couple. The next time these two leaders might engage would be at an international forum that would negotiate with them ways to come to a two-state solution. In the French Foreign Ministry thought has been given to the P5+1 (the five permanent UN Security Council members and Germany in the Iran nuclear negotiations) framework as a kind of future peace tribunal for the Palestinian issue.

There actually may be no other way. The inability of Netanyahu and Abbas to agree even to an agenda for future talks, the continuation of settlement expansion and the strengthening of extremists in both countries, and Hamas and Economy and Trade Minister Naftali Bennett make any model of direct negotiations impossible.

There is, on the other hand, a global consensus that the conflict must at the very least be placed on a negotiation track. Left to their own devices, this will "end up in bloodshed," say sources at the State Department. US Secretary of State John Kerry told Abbas not to expect anything before Nov. 6, and warned him against unilateral activity at the UN.

Yet, Abbas is determined — after giving up on Netanyahu and Obama — to move with vigor at the UN Security Council, General Assembly and at the specialized UN agencies. His hope is to create international pressure on Washington, mainly from its partners in the fight against IS and negotiations with Tehran. Palestinian policymakers in Abbas' circle admit to Al-Monitor that statehood will not be born out of unilateral diplomacy, and that the real aim is to introduce their predicament into multilateral diplomacy.

Asked about a P5+1 framework for negotiations with Israel, these senior sources welcomed the idea, given that the Arab Peace Initiative would be the basis of the talks, and that Egypt and Jordan would also be invited. Netanyahu and his team are aware of such plans but trust that the Americans prevent their realization.

The question on everybody's mind has to be: What's next? Can one sit idly by and wait for a rude wake-up call filled with violence and despair? Can one just watch from the sidelines when two formidable nations are committing national suicide with shortsighted policies? When they are kidnapped by messianic radical forces? Can the world's only occupation by a democracy of another people be allowed to continue? Can the rejection of the only Jewish state be legitimized? When the answer to all these questions is a clear no, one must come up with a realistic alternative.

It may come from within — new elections in Israel, even possibly in 2015, that could result in a more moderate national unity government. In Palestine, it is to be hoped for that Abbas will consult more with the pragmatic forces in Fatah, graduates of the Oslo process, rather than with more radical populists.

Alternatively, the solution could be from the outside. Perhaps it is not too far away, the day when Kerry and his colleagues from Russia, China, the United Kingdom, France and Germany will summon the Israeli and Palestinian foreign ministers to a negotiation chamber in Geneva and make them an offer they cannot refuse.