Israel needs a US president who attempts to guide it away from occupation, and who isn't afraid to criticize it while showing empathy to both Israeli and Palestinian children — the way President Barack Obama is acting. 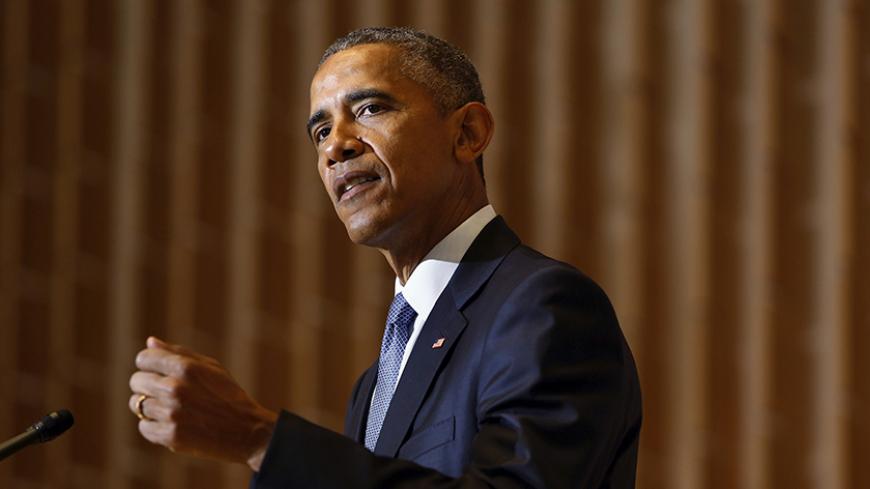 There are indications that US President Barack Obama and Israeli Prime Minister Benjamin Netanyahu will meet in the White House in mid-July to discuss the eventual Iran agreement and efforts to renew the Israeli-Palestinian peace process. The United States, however, has denied this rumor.

According to a source close to Netanyahu who spoke to Al-Monitor on condition of anonymity, as the Iran nuclear agreement deadline approaches, the Israeli government and its premier will continue to fight Obama on it in Congress and in the American public opinion arena. They will continue to depict Obama as naive and weak.

Undoubtedly, Netanyahu would like a more aggressive US president — one who would intervene militarily in Syria and Iran; a president who would not actively seek a two-state solution and who would refrain from criticizing Israel's settlement policy and the occupation of the West Bank. The relationship between the current US administration and the Israeli government is at a historic low.

And yet, in many ways, Obama is perhaps the best ally Israel has ever had in the Oval Office. I actively took part in Israeli-US relationship building alongside former Israeli President Shimon Peres with former US Presidents Jimmy Carter, Ronald Reagan, George H.W. Bush and Bill Clinton. During these periods, Israel had both Likud and Labor prime ministers, yet the bilateral relationships were always very close. There was strong and unconditional defense support as well as intimate policy coordination in relation to the Middle Eastern situation and regional peace processes. This was especially true during the Oslo Accord with President Clinton.

That alliance was Israel's main foreign policy asset — a bridge to new friendships in the world and a deterrent against Israel's Arab enemies.

Today, this alliance is in danger. According to a senior State Department source, speaking on condition of anonymity, Obama is disappointed with Netanyahu and makes no secret of it.

Indeed, in an interview on Israel's Channel 2 television June 2, the US president criticized the Israeli prime minister for steering Israel away from the values of its founding fathers, including equality for Arab minorities and peace with its Arab neighbors.

The US State Department emphasized that Netanyahu has lost credibility as a possible peacemaking partner in the region.

At the same time, Netanyahu does not mince words when it comes to his attitude toward Obama's Iran and Middle East policies, which he perceives as naive, weak and misguided. Netanyahu broke with the fundamental bipartisan approach to the US-Israeli alliance when he sided with the Republicans in Congress against Obama on the Iran nuclear negotiations. The source close to Netanyahu said that the premier will continue to do so even when an agreement is reached.

And yet, the sour Obama-Netanyahu relationship is not a litmus test for the US president's policy and attitude toward the State of Israel.

Obama, as many on the Israeli left believe, is a great friend and supporter of Israel. Israel today lives in a dichotomy between an open, cosmopolitan society, linked both economically and culturally to the opportunities of globalization, and a more religious, messianic-like society that is paranoid about what it perceives as global hostility toward Israel, and even as anti-Semitism.

Obama was very much aware of this schism within Israel when he declared that Israel can either be guided by a policy of fear or by a policy of hope. Other US presidents shied away from publically outlining this internal division within Israeli society and spoke to and about "the government of the day."

Israel needs a US president who does not engage in futile wars in the region, but one who prevents the use and creation of chemical and nuclear weapons in Syria and Iran through collective diplomacy. A president who is not necessarily affected by the politics of the American Jewish community, but who cares first and foremost about the morality of the Jewish state. A president who loves Israel for what it is, but at the same time feels free to criticize it when needed.

Obama's disillusion with the Israeli government, and to a large degree with the Palestinian leadership, has led him, the senior State Department source said, to disengage from the eventuality of a US-led peace process. On several recent occasions, he or his associates have said that the United States is reassessing its policy toward Israel, specifically on the US backing of Israel against diplomatic efforts on the Palestinian issue by the international community, primarily the European Union. According to the senior State Department source, a US veto on a French proposal about Palestinian statehood at the UN Security Council, in the aftermath of the Iran agreement, is uncertain to a large degree.

Ultimately, advancing a two-state solution along the lines of Secretary of State John Kerry's proposed framework agreement, i.e., with a border based on the 1967 lines, depends on Israel (and the Palestinians). Israelis voted against it in the March 17 election, yet the challenge remains, given a volatile situation on the ground and growing European pressures regarding the construction of settlements.

In this situation, the role of the US president is to define for Israel the real alternatives it is facing: remaining a colonial power and risking its identity as a Jewish state or ensuring its security and identity through a necessary and historic two-state solution.