Has Obama had enough of Netanyahu? 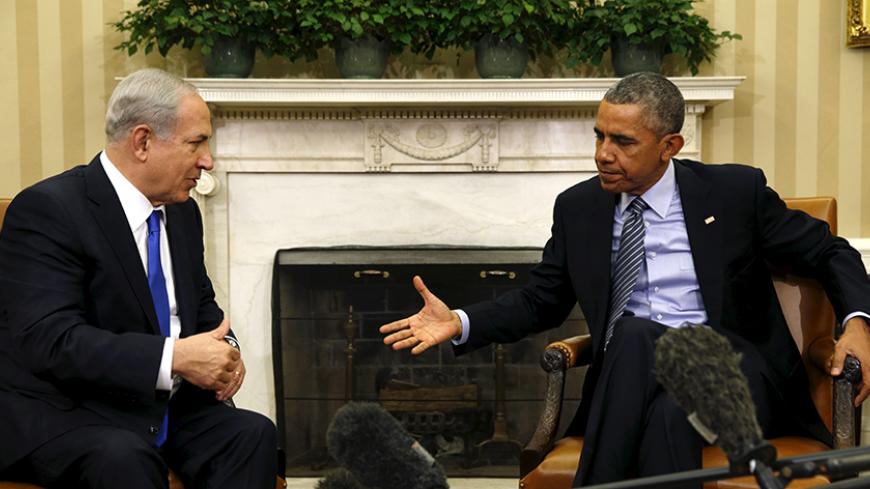 US President Barack Obama extends his hand to Israeli Prime Minister Benjamin Netanyahu during their meeting in the Oval Office of the White House in Washington, Nov. 9, 2015. - REUTERS/Kevin Lamarque

Israeli-American relations are at an all-time low. Prime Minister Benjamin Netanyahu’s refusal to meet President Barack Obama, as suggested by the White House, prior to the AIPAC conference on March 20 is another unprecedented blow to the relationship.

Obama does not mince words when describing his views of the Israeli prime minister. In his interview with Jeffrey Goldberg published in the April issue of The Atlantic, he recalled an incident when Netanyahu lectured him on the Middle East. Obama then criticized him, telling Netanyahu that, while he was an African-American son of a single mother, he now lives in the White House as he got elected president of the United States, and that he actually understands what Netanyahu was saying.

This incident must be an unprecedented one between any American president and a foreign dignitary. There is not a single issue on which Obama and Netanyahu see eye to eye. Their opinions on settlement expansion, on the two-state solution based on the 1967 borders, on the Iran deal and on the scope of the US-Israel long-term security deal that is currently being negotiated differ fundamentally. Their differences derive from a principal ideological gap — Netanyahu is not a big believer in diplomacy and negotiations for conflict resolution and never rules out military intervention; Obama, as the leader of the free world, has introduced effective conflict resolution through collective diplomacy with the use of force as a last resort, such as in ending the wars in Iraq and Afghanistan, as well as in the Iran deal and the Syrian chemical weapons crisis.

These differences of views were evident in Vice President Joe Biden’s visit to Israel March 8-10. An American diplomatic official in Tel Aviv told Al-Monitor, on condition of anonymity, that the prime minister rejected the vice president’s suggestions to renew Israeli-Palestinian peace talks on a two-state solution in any way that would meet, even halfway, Palestinian President Mahmoud Abbas’ demands to have the negotiations based on the 1967 lines and to halt settlement expansion. Instead, Netanyahu blasted Abbas for incitement of violence. The Obama administration, on the other hand, views Abbas as relatively moderate and believes he should be strengthened by diplomatic initiatives. According to this US source, the American delegation came away with the sentiment that all Netanyahu wants is for time to run out on Obama’s presidency.

Aaron David Miller, senior vice president of the Woodrow Wilson Center and formerly part of President Bill Clinton’s peace team, told Al-Monitor, “Obama and Netanyahu have the most dysfunctional relationship of any US president and Israeli prime minister. This dysfunctional relationship originates both in their opinion differences, as in the clash of temperament and style, and was made worse by the bitter fight on the Iran deal.”

Netanyahu, in the Iran debate, ruined his reputation — not only with Obama, but with all of the Democratic establishment. Opposing an American president on his political home turf should have been taboo for any Israeli prime minister. With Iran fully implementing its side of the nuclear bargain (contrary to Netanyahu's warnings), and the strengthening of the moderate camp in the recent Iranian parliamentary elections, the Obama administration feels vindicated.

Yet the principal issue of contention between the Obama administration and the Israeli government is the Palestinian issue. Obama is disengaging from the Middle East. As expressed in his interview in The Atlantic, he is disappointed with the Arab world for failing the Arab Spring democratization process. He will not let others, and especially not countries hostile to America, force the United States into the role of a regional policeman. On the Palestinian issues, he strongly supports the establishment of an independent Palestinian state under conditions of security and peace with Israel. Much of his foreign policy is value-based and he, therefore, favors ending the occupation in exchange for security for Israel, which is of paramount importance to him. The US president also believes that a two-state solution rescues Israel’s Jewish-democratic identity.

Both of Obama’s views — disengaging from military intervention in the region and supporting a two-state solution — are considered by the Netanyahu government as naive and wrong. The Israeli prime minister prefers to see a right-wing American president policing the Middle East, with Israel as a strategic ally.

In the last year of Obama’s presidency, Israel and the Arabs will be left to their own devices. Obama’s America will not do the job for them. The times when you could curse the United States and still expect its unconditional assistance are over. This is not only a reflection of Obama’s foreign policy, but of greater isolationism in American public opinion.