Who expects more of Trump visit, Israelis or Palestinians?

During Donald Trump’s visit, Israel wants him to realize wide right-wing objection to the two-state solution, while Palestinians expect that Trump would agree to launch shuttle diplomacy toward negotiations. 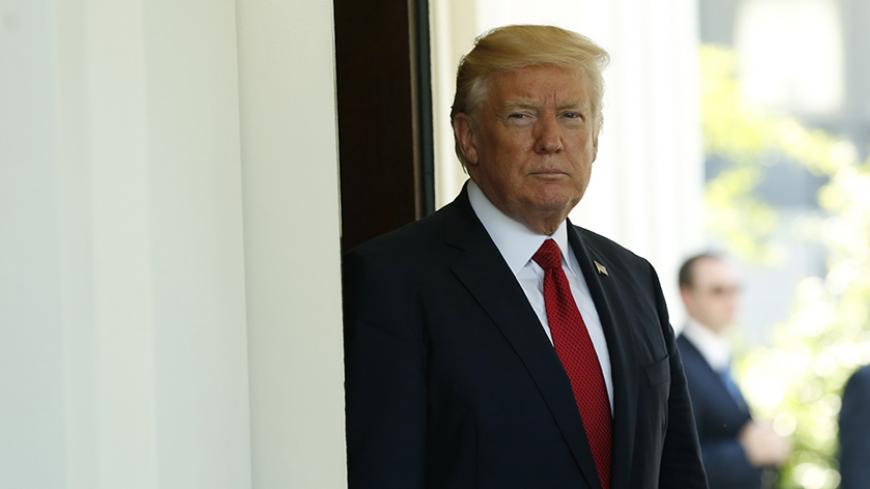 Israeli Prime Minister Benjamin Netanyahu sees in US President Donald Trump’s May 22 visit to Israel not only a strategic opportunity to strengthen the ties and coordination between the two countries, but also an opportunity to strengthen his own political position in the country and within his right-wing coalition. Netanyahu will be a gracious host, overwhelming his guest with superlative compliments. The domestic public relations message will be: Only Netanyahu can create a close cooperative relationship with Trump and prevent US pressure on a two-state solution from the unpredictable American president.

Since Trump came into office, the relationship between the White House and the prime minister’s office is one of ongoing contact, with Israel’s Ambassador to Washington Ron Dermer and Trump’s closest adviser and son-in-law Jared Kushner as key point people. Netanyahu and his associates are very relieved that the Barack Obama era is over, yet they are disappointed with Trump’s policy on settlements. His message against settlement expansion was sterner than Jerusalem expected, demanding restraint. Practically, this means building mainly within the already constructed areas of settlements. And so, Trump is not HaBayit HaYehudi leader Naftali Bennett’s dream come true.

A senior Israeli diplomat who heads his ministry’s representatives on the joint visit preparation team of the Ministry of Foreign Affairs and the prime minister’s office, spoke to Al-Monitor on condition of anonymity. He said that Jerusalem’s expectations for a successful visit are very high, stating, “Unlike Obama, Trump in our view has a positive gut feeling toward Israel. He admires success stories.” The official also said that beyond strengthening the personal ties and chemistry between Trump and Netanyahu, Israel hopes to achieve several goals during this visit.

Most important, Israel would like this visit to project to the Palestinians and to Arab countries that the Israeli-American axis is unbreakable. At the same time, Israel wants Trump to understand the extent of the pressure exerted by the Israeli right against a two-state solution. There is no doubt that Bennett will cooperate in this venture.

On the larger regional level, Israel wants to strengthen coordination with the United States on Iran, in terms of monitoring the Iran deal and curbing Iran’s sponsorship of Hezbollah and Hamas terror. Also related to Iran, Israel hopes to convince Trump to increase Israel’s maneuvering room in Syria, against Iranian arms supply to Hezbollah, especially with regard to Russia. Israel would like for the United States to recognize the status quo in the Golan Heights (namely the existing Israeli rule of the Golan Heights).

Concerning international involvement in the region, Israel hopes to use the Trump visit to prevent any European Union initiative on a two-state solution, especially an initiative led by France. With Emmanuel Macron as France’s new president, and given Paris’ appetite for such initiatives, Israel anticipates a European move in that direction. Israel also wants to prevent the international community from adopting the Arab Peace Initiative as the main basis for negotiations.

The issue of global battle against extreme Islam terror will surely be brought up in discussions between Netanyahu and Trump, with Netanyahu emphasizing that Israel will assist in strengthening the pragmatic Arab coalition against the Islamic State, also by agreeing to a regional approach to Israeli-Palestinian peacemaking.

Netanyahu would express to Trump his willingness to a meeting in Washington with the American president and Palestinian President Mahmoud Abbas, without preconditions.

The last, but certainly not less important, goal of Israel during the visit would be achieving US recognition of Jerusalem as Israel’s capital.

While Israel prepares its strategy for Trump’s visit, the Palestinians on their side are not remaining passive. Abbas returned from his May 3 White House meeting with uncharacteristic optimism, and he is preparing a good welcome for Trump in Bethlehem. A senior Palestinian Authority Cabinet minister spoke to Al-Monitor on condition of anonymity about the main visit outcome that the Palestinian leadership is wishing for. Ramallah is hoping for a presidential commitment to engage in US shuttle diplomacy, aimed at exploring the possible positions on all permanent status issues. Such shuttle diplomacy should bring about in the months to come a proposal for a framework agreement.

The Palestinian side will demand during this period of shuttle diplomacy that Israel freeze settlement construction and the United States withdraw its demand to halt payments to families of Palestinians who have committed terror.

The official added that despite earlier Palestinian expectations that the Trump administration was totally pro-Israel, privately they hear tones and content that very much resemble those of the Obama-John Kerry administration. More so, Trump may be more blunt and unpredictable than his predecessor, which could actually benefit the Palestinians. The source stated that if the visit is a failure, the Palestinian leadership will ask to immediately convene the Arab League in order to approach the EU in favor of a United Nations Security Council resolution on a Palestinian state based on the 1967 borders.