Contrary to public impression, Israeli political and security establishments were actually worried over US President Donald Trump’s regional visit, especially over his positive impressions of the Saudi leadership. 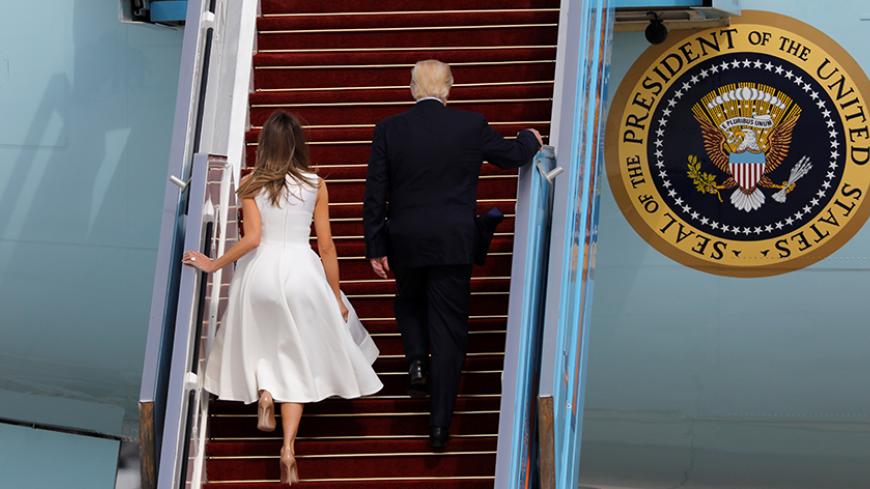 Jerusalem, in general, and Ministry of Foreign Affairs (MFA) personnel, in particular, sighed in relief after Air Force One took off from Ben Gurion Airport on May 23. According to a protocol department official, the organizational aspects of US President Donald Trump’s visit were a nightmare. The MFA was informed only minutes before landing that the president was ready to shake the hands of Israeli Cabinet ministers. Other last-minute changes were communicated by the Americans almost every hour. But protocol apart, Trump left behind an Israeli Foreign Ministry concerned first and foremost over issues of content. This sentiment of concern was shared by Prime Minister Benjamin Netanyahu, although he kept a smiling poker face until the very end of the visit.

According to a senior Israeli MFA official who took part in some of the meetings, the statements Trump and his close entourage made in private were less encouraging than the president’s public statements.

According to the official, in his talks with Netanyahu, Trump reiterated his administration’s staunch support of Israel’s security and its technological military edge. When talking about the Palestinian issue, he did not go beyond what he said to Netanyahu in the Feb. 15 Oval Office meeting, and he did not mention a two-state solution. Trump was very forthcoming on the issue of curbing Iran’s nuclear ambitions and also on acting against Iran’s terror network in Iraq, Syria and Lebanon (Hezbollah). He included Hamas in this context.

The official explained that on the flip side, Trump left the MFA concerned about several issues. A main reason for concern, for both the political and the security establishments, was the unprecedented $110 billion arms deal with Saudi Arabia.

In that context, the ministry noted Trump’s extremely positive impression of the Saudi leadership, as well as his positive impressions of Egyptian President Abdel Fattah al-Sisi and Jordanian King Abdullah II. Trump is clearly leading the Arab Sunni world in a battle against fundamentalist terror and beyond it in a battle over the sphere of regional influence against Iran. The president emphasized time and again the willingness of Saudi King Salman bin Abdul-Aziz Al Saud to begin normalizing relations with Israel in parallel to progress on an Israeli-Palestinian peace deal. In fact, there was only an indirect allusion to the 2002 Arab Peace Initiative during the Trump-Netanyahu meetings, but it was clear to the Israeli interlocutors that Trump has heard about it repeatedly in his meetings in Riyadh.

The Israelis were also concerned over Trump’s positive impression of Palestinian President Mahmoud Abbas, which does not match Netanyahu’s assessment of the Palestinian leader.

Trump decided to expedite his administration’s shuttle diplomacy, and on May 25, he sent his peace process envoy Jason Greenblatt for further talks in Jerusalem and Ramallah. According to the MFA official, Israel is now taking a Trump initiative more seriously, yet expecting it to fall short of the ultimate deal he was originally talking about. Jerusalem assesses that Greenblatt’s aim is to prepare a summit between Trump, Netanyahu and Abbas with the participation of Sisi, Abdullah and a Saudi representative in order to announce the resumption of direct negotiations.

The official assumes that before such a meeting, Trump may announce guiding principles for such talks but will stay away from any detailed terms of reference for permanent status talks. It is the administration’s clear intention to create a link between the fight against the Islamic State and an Israeli-Palestinian peace process, both of which will be led by Trump himself. The official told Al-Monitor that the MFA was under strict instructions not to express the Israeli concern publicly.

On the other side in Ramallah, there was an air of satisfaction with Trump’s May 23 visit to Bethlehem. A senior PLO official told Al-Monitor that Trump was clearly under the influence of the Arab interlocutors in Riyadh regarding the centrality of the Palestinian issue to the Arab world. Abbas was also encouraged by the equal weight in Trump’s statements between Israel and the Palestinian Authority (PA), and between himself and Netanyahu. Abbas was asked to show flexibility on the conditions for the meeting with Trump and Netanyahu, to stop incitement to violence and to stop financing groups connected to terror. Netanyahu has promised restraint on settlement construction.

And so, in contrast to public impression, in the aftermath of Trump’s visit there was more satisfaction in the PA than in Israel with the US administration.