While the Israeli side was disappointed by the US demands to curb settlement construction, the Palestinian side was pleasantly surprised by the approach of President Donald Trump’s envoy Jason Greenblatt. 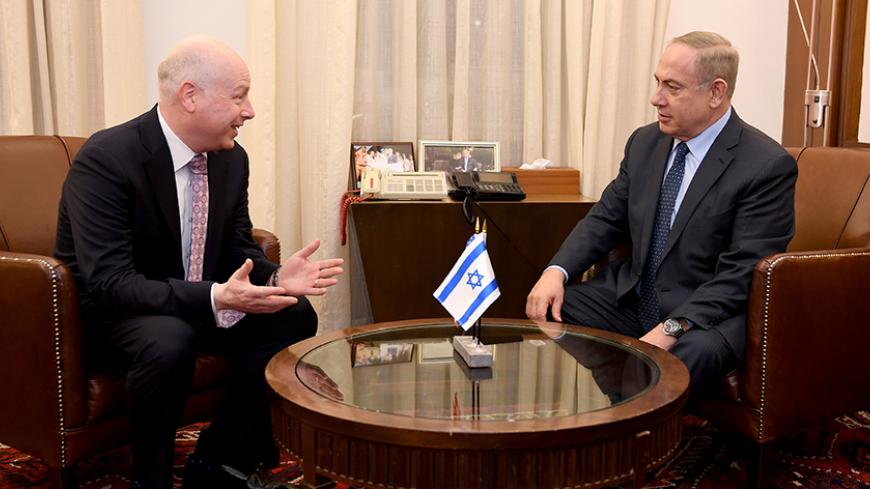 Alarm bells went off last week in Education Minister Naftali Bennet’s right-wing HaBayit HaYehudi party during Jason Greenblatt’s March 13-16 visit. The Israeli right expected the US president’s representative for international negotiations to be a political messiah that would greenlight for the government the continuation of its settlement policy and its de facto annexation policies in Area C.

According to a senior Israeli Ministry of Foreign Affairs (MFA) official with direct access to Prime Minister (and Foreign Minister) Benjamin Netanyahu, Greenblatt’s rhetoric was in fact very promising. Greenblatt pushed all the right buttons and used all the right terms, including references to the “unshakable alliance” between the two countries, “a new page in the US-Israeli relationship,” “Israel’s security being of paramount interest to the United States,” “Israel the Jewish state,” etc.

Yet the MFA official noted that for a government whose prime interest is to prevent at any cost a two-state solution, there were also some alarming statements of intention voiced by the US envoy. For instance, Greenblatt emphasized on several occasions during his visit President Donald Trump’s interest in a regional deal and his interest in advancing Israeli-Palestinian peace. While a preference for a two-state solution was not uttered, the implication of a future Palestinian state was obvious. Greenblatt also alluded to a possible summit between Trump, Netanyahu and Palestinian President Mahmoud Abbas, possibly in Cairo later this year.

As it turned out, Greenblatt follows in his master’s tweeting footsteps. But the tweets of the envoy did not really please his hosts. Particularly disturbing were apparently two consecutive tweets he posted while in Jerusalem, one from a synagogue and one from a Palestinian house, with a similar picture of the Western Wall and the mosques.

The most difficult issue for the prime minister, according to the MFA official, was the hours spent on finding an agreed formula on settlement construction and restraint. While apparently Netanyahu showed some flexibility, it did not satisfy the Americans. Initially, the US envoy insisted on settlement construction continuing within the settlement blocs only in the already built areas, which the prime minister could not accept. Bennett — the elephant in the room — would not have been happy.

Still, this does not mean that this was a John Kerry-style mission by a Republican envoy. Contrary to the Barack Obama administration, the current one is generally more right wing, forceful and nationalistic, and a riddle in terms of its future plans.

In Ramallah, reactions to the Greenblatt mission and visit were a mixture of deep suspicion with some positive sense of surprise. A senior official in the PLO close to Abbas expressed himself on the issue of Greenblatt in person with some humorous cynicism. Speaking on condition of anonymity, the source said, “At first we had the impression that we were talking to an Israeli envoy, but not because he is an Orthodox Jew; we are familiar with Jewish envoys such as Dennis Ross, Aaron Miller, Dan Kurtzer and Martin Indyk. We receive them better than Israel would have received a Muslim American envoy.”

Greenblatt, according to the PLO official, actually expressed an equal empathetic approach to both sides. He emphasized the US president’s wish to study Greenblatt’s impressions upon his return in order to formulate an American policy toward Israeli-Palestinian conflict resolution within a regional framework. Egypt, Jordan and Saudi Arabia would serve as an umbrella for peacemaking, as well as for the struggle against fundamentalist terror. While skeptical, the PLO official concluded from the Greenblatt visit that there could be a partner in the new Washington for Palestinian policy initiatives on a two-state solution, stating, “Donald Trump may surprise us all with a proposed regional deal.”

Some in the Palestinian leadership are focusing on preparing policy proposals to be conveyed to the White House, bringing into account what they heard from the US envoy. The impression they were left with from the talks with Greenblatt was that the future of the settlers is the biggest impediment to a fair two-state solution along the 1967 lines.

The PLO senior official said that the main policy proposal that is currently being explored by PLO pragmatists close to Abbas offers most Israeli settlers to remain in their homes under Palestinian sovereignty within the framework of a two-state solution. The proposal draft is based on three basic elements. The first is that the border of the two states would be the 1967 lines, with East Jerusalem as the Palestinian capital and a 2% land swap of the West Bank. Then there is the issue of the settlers. Some Israeli settlers would relocate into the 2% settlement blocs, mainly in the Jerusalem area; the others, if they wish, could remain in their houses under full Palestinian sovereignty, law and security jurisdiction. They would remain Israeli citizens. The third element is negotiating all other core issues toward a permanent status agreement on the basis of the 2002 Arab Peace Initiative.

Greenblatt’s mission left some Israelis and Palestinians surprised, and it sparked some fresh thinking. Nevertheless, it left the parties with their traditional skepticism and suspicion about any real initiative for a historic compromise.