Netanyahu dictates agenda in meeting with US envoys

Prime Minister Benjamin Netanyahu was the one dictating the agenda in his meetings with US envoys Jared Kushner and Jason Greenblatt. 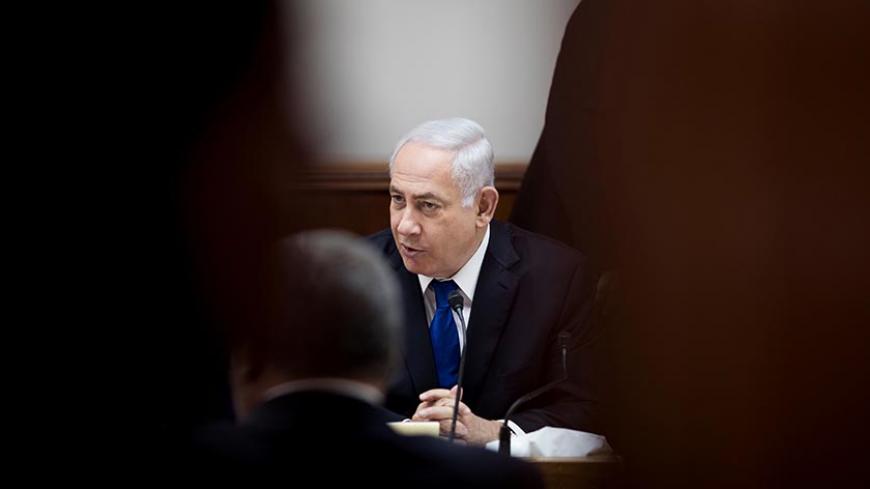 The only ones who were really pleased with the talks that White House senior adviser Jared Kushner and US envoy Jason Greenblatt held in Jerusalem and Ramallah were the envoys themselves.

The Israeli side was satisfied that a good part of the agenda in these talks was actually determined by Prime Minister Benjamin Netanyahu and that the US envoys initiated only a small part of the topics discussed. A senior Ministry of Foreign Affairs official present during part of the talks told Al-Monitor that Netanyahu is a master at formulating agendas for such negotiations, pushing the topic list into his own home turf on which only he can win. In this case, Netanyahu turned the payments by the Palestinian Authority (PA) to families of Palestinian terrorists and prisoners into the cause celebre. He successfully convinced President Donald Trump that these payments encourage terror. In Palestinian eyes, these payments represent a social contribution to large segments of Palestinians for being victims of the conflict.

Discussing this payment issue stole the focus away from the peace process itself and Trump’s aspirations for an “ultimate deal.” In the talks with Kushner and Greenblatt, Netanyahu provided ample evidence that the PA continues the payments, knowing well in advance that Palestinian President Mahmoud Abbas would refuse halting them.

Hours of talks were taken from what the US diplomats originally came for — to convince the parties to join a US-led regional meeting later this year in Washington. This meeting is supposed to focus on anti-terrorism and is intended also to reopen bilateral Israeli-Palestinian peace negotiations.

According to the same Israeli official at the Ministry of Foreign Affairs, Netanyahu is not only a master of formulating convenient-for-him agendas, he is equally a master at buying time. Netanyahu agreed that in the course of 2017 he would work with the US administration on the terms and conditions for such a conference. He expressed an interest in meeting President Trump beforehand to make sure that such a gathering is a success. Netanyahu refused to detail the positions Israel will present in such a conference, except for what he had already said publicly — the recognition of a Jewish state and Israel’s long-term, full security control of the West Bank. The rest of the talks between Netanyahu and the two envoys were dedicated mainly to Iran and the common interests of both Israel and the United States to fight against the Iranian state-sponsored terror in Syria, Lebanon and Iraq.

The Israeli official’s impression of the US negotiation team was that they were very businesslike. They move according to talking points from their boss and they are definitely interested in progress. He noted that apparently there won’t be a US plan anytime soon on how to advance and in which negotiation framework to channel their efforts. Incremental confidence-building measures will be demanded from both parties. Israel is already planning with the PA for Palestinian construction in Area C (in the Qalqilya area), and Israeli Chief of Staff Gen. Gadi Eizenkot spoke on June 20 on the improved security coordination between Israel and the PA.

The Israeli official estimates that there are two circles working on the Mideast process issue on behalf of Trump: the inner circle of Kushner and Greenblatt and the wider administration comprising of national security adviser H.R. McMaster, Secretary of State Rex Tillerson and Secretary of Defense James Mattis. The inner circle is instinctively very much on Israel’s side; the other members of the administration are more pragmatic and attuned to the demands of Arab Sunni countries like Egypt, Jordan and Saudi Arabia. The official characterized Kushner’s attitude, “His heart is clearly in Jerusalem, but he has one ear directed to Washington and the other to Riyadh.”

The Palestinian side also recognized that Netanyahu had imposed his agenda of irrelevant conditions. A senior PLO minister told Al-Monitor that Abbas remains positive and cooperative toward the US administration. He is flexible on the terms of the freeze of settlements, agreeing to construction restraint and having the United States monitor it, and he is willing to find a solution to the funding of prisoners issues by channeling the funds through unofficial channels.

It was also evident in Ramallah that the US envoys are very attentive to the voices from Cairo and from Riyadh (especially with the change in position of the crown prince). Abbas has asked Egyptian President Abdel Fattah al-Sisi to play a proactive role in advance of opening a conference for a two-state solution process.

The Palestinians were asked to send to Washington in the weeks to come a team of negotiators to further explore the issues. They believe the same invitation was conveyed to Israel. This will be the next step in the US exploration of a peace process, leaving both sides in a battle of brains leading to no progress so far.