By dispatching his son-in-law, the president has made it clear to both sides that he’s serious about wanting a deal. But will that be enough? 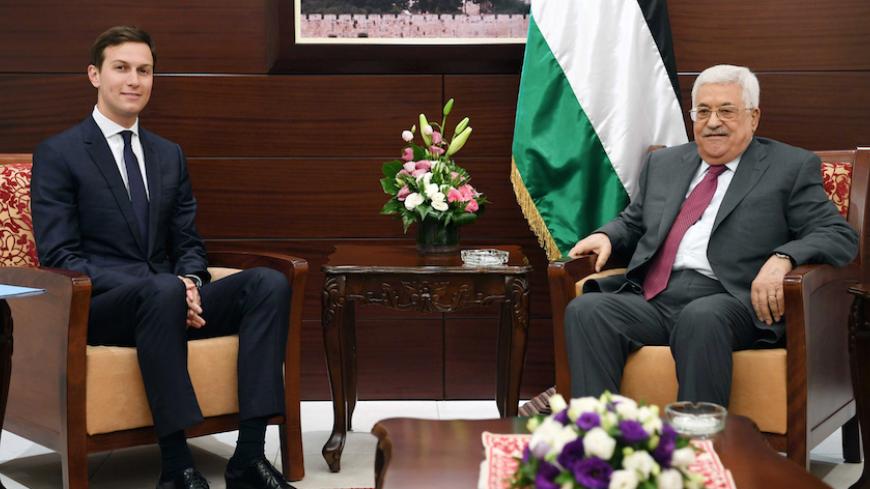 WASHINGTON — US President Donald Trump dispatched his son-in-law and top adviser Jared Kushner to Israel today in one of the strongest signs to date of his apparently sincere interest in pursuing peace with the Palestinians. After Kushner held more than two hours of meetings with Prime Minister Benjamin Netanyahu in Jerusalem, however, the White House acknowledged that forging the ultimate diplomatic deal won’t be a cakewalk.

“The United States officials and Israeli leadership underscored that forging peace will take time and the importance of doing everything possible to create an environment conducive to peacemaking,” the White House said in a readout of the meeting. The meeting also included Trump’s special representative for international negotiations Jason Greenblatt, US Ambassador to Israel David Friedman, Israeli Ambassador to the US Ron Dermer and Netanyahu chief of staff Yoav Horowitz.

Kushner and Greenblatt later met with Palestinian Authority President Mahmoud Abbas in Ramallah. They’ll then return to Washington to brief Trump, Secretary of State Rex Tillerson and National Security Adviser H.R. McMaster and “continue the conversation about next steps,” the White House said.

The fact that Trump sent his son-in-law to bolster Greenblatt’s peace efforts shows leaders in the region the priority the president places on advancing a peace deal, analysts said.

“I think, first of all, there is a message: The US is still committed and serious,” Ghaith al-Omari, a former member of the Palestinian negotiating team, told Al-Monitor. “The fact that Kushner is with [Greenblatt] is an indication of high-level interest from the administration and also strengthens Greenblatt. It shows he is not working on his own; he has the support of Kushner.”

“The Palestinians ultimately are looking for only one thing in an American envoy: Is this person empowered or not?” al-Omari said. “In this regard, Kushner is seen as someone serious coming and supporting Greenblatt.”

The Kushner visit is “also meant to increase the pressure on the sides — to basically show, ‘We expect you to give us clear answers,’” said Omari, who is now a senior fellow at the Washington Institute for Near East Policy.

“The sides are being pushed to be committed. ... They want each of them to take certain domestic steps,” Omari said. “Israel has presented its own version of a settlements slowdown. The Palestinians have cut support to some prisoners. ... [Now Trump’s envoys are seeking] better clarity on what will be the terms to relaunch negotiations.”

The Trump administration “is making this effort a priority,” Yousef Munayyer, a Palestinian-American analyst with the US Campaign for Palestinian Rights, told Al-Monitor.

“So it looks like they are trying to move this thing forward,” Munayyer said. “The question is, what is it they are going to be able to move forward when the parties are light years apart? And I think they are trying to figure out where the parties realistically are. And that is one of the things they are really trying to get from the Israelis ... to understand, what is your position?”

When Trump traveled to Jerusalem and Bethlehem last month, the readouts from the meetings suggest Abbas told Trump he was ready to go to negotiations immediately without preconditions, Munayyer said. That was not mentioned in the readout with Netanyahu. “And so the clear implication ... is that Abbas is ready to move forward and Netanyahu is not,” Munayyer said.

“That disappointed Trump,” Munayyer said. The Trump team is “really trying to see from the Israelis, could you even engage in negotiations under the same terms of reference that existed in previous negotiations [based on the] two-state model? I don’t think they can.”

Both the Israeli and Palestinian sides may want to play for time while not angering the US president, whom they perceive to be politically weakened at home because of the Russia probe and other controversies, a former Israeli official said.

“Both sides are really weighing their options given the growing perception that the president is not getting any stronger,” the former Israeli official told Al-Monitor in an interview.

“Maybe if you come up with concessions prematurely you end up being a sucker because there will be no reward for it,” he said. “So both sides are sitting on their hands to see how Washington evolves. Is he [Trump] going to be castrated, a paper tiger in three to five months? They don’t want to be a fool.”

“Therefore, Kushner’s mission at the moment is to tell the two parties to get serious,” the former Israeli official said. “I think that Kushner will leave here more sober about what can be done, how fast it can happen and what might be the consequences of failure on their watch.”

Reviving the peace process “is not a risk-free enterprise,” he added.

The White House had earlier asked the Israeli and Palestinian sides to send delegations of five senior officials each to Washington as early as immediately after the end of Ramadan June 24 to do further preparatory work on the peace push, the former Israeli official said.

The preparatory meeting earmarked for next week, however, “is not the big celebration. ... It has no catering,” the former Israeli official said.

With an eye to possibly needing to revamp his right-wing coalition were he to pursue peace talks, Netanyahu has asked his Washington interlocutors to delay any high-level peace talks relaunch until after Israel’s Labor Party primary, scheduled for July 3, the former Israeli official added.

Veteran former US diplomat and Middle East peace negotiator Robert Danin said the dilemma for Kushner and Greenblatt is that telling Trump a peace deal can’t be done isn’t an option.

“When the boss tells you, ‘Go get me a deal,’ you are not in a position to say it can’t be done,” Danin, now with the Council on Foreign Relations, told Al-Monitor. “Both Kushner and Greenblatt have a huge challenge because, on the one hand, they have their marching orders, which is to get the ultimate deal. And yet, what they are encountering is tremendous skepticism at every turn. ... Very few people see this as an auspicious moment.”

“So people want to believe there is some new reason to believe President Trump could succeed” where past efforts have failed, Danin said. “But very few people are able to identify what that thing is that would make it different. Other than that, the parties do not want to run afoul of President Trump. They are not going to sacrifice, make the core compromises that any deal would require ... even to please the president of the United States.”

“The challenge is, what do you do?” Danin said.

“First of all, it is wise to acknowledge you have a lot to learn,” Danin said. “Do a lot of listening [and] talking to a lot of people, trying to understand the situation. What they are doing is mapping the terrain. ... They are trying to understand: What can we learn? So I would put [this trip] into the pre-negotiations phase of any negotiation. And in a sense, that is very wise to not get too far out in front.”

“The fact expectations are low is a gift,” Danin said. “They should resist any impulse to want to try to show short-term wins. It is wise to listen a lot, ask questions and ultimately put the onus on both sides to try rather than tell us why the other side is a problem; instead, tell us what it is they ultimately can [do] and want. Because any serious American initiative has to start with an effort to understand the parties.”

The former Israeli official agreed that Greenblatt is likely to welcome a slight delay to do further preparations before any peace talks relaunch. Greenblatt has been trying to formulate with the parties a set of synchronized confidence-building measures that would improve the atmosphere for talks.

“Phase one of his strategy is no less important: He wants to reduce the cynicism among the various constituencies ... and change the dynamics,” the former Israeli official said. “So the moment negotiations are launched, [people] can already celebrate changed dynamics on the ground.”