Jared Kushner’s Middle East peace push is being undermined by a series of administration policy decisions that have alienated both the Palestinian leadership and people. 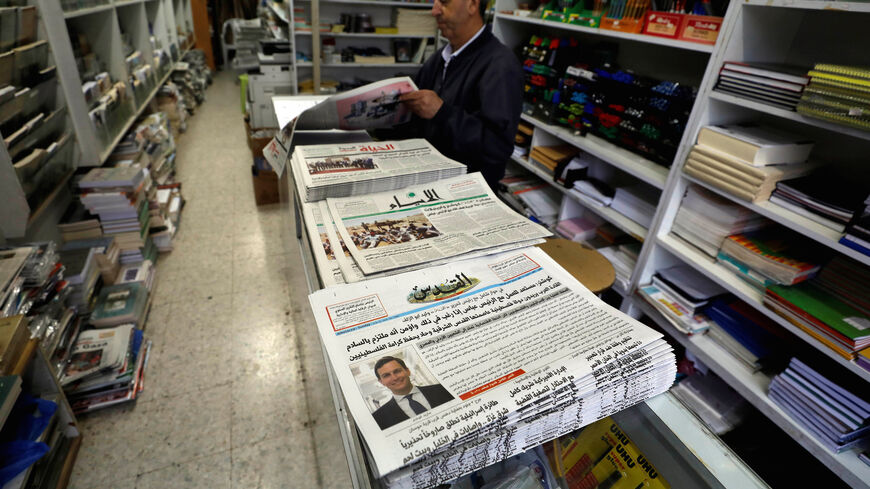 The issue of the Palestinian newspaper Al Quds containing an interview with Jared Kushner, a senior adviser to US President Donald Trump, is displayed for sale in a bookshop in Ramallah in the occupied West Bank, June 24, 2018. - REUTERS/Mohamad Torokman

WASHINGTON — In a rare interview with the Palestinian media, President Donald Trump’s son-in-law and senior adviser Jared Kushner implored the Palestinian people to pressure their leadership to give his Middle East peace efforts a chance.

“Show your leadership that you support efforts to achieve peace,” Kushner told Al Quds newspaper in a June 23 interview, a transcript of which was sent to reporters by the White House.

“Let them know your priorities and give them the courage to keep an open mind toward achieving them,” said Kushner, who was on the final stop of a six-nation trip to the region with Jason Greenblatt, Trump’s envoy for international negotiations. “Don’t let your leadership reject a plan they haven’t even seen," Kushner added.

But a cascading series of controversial Trump administration decisions, beginning with moving the US Embassy to Jerusalem last month, and threats to cut off US assistance to the Palestinians have deeply alienated both the Palestinian leadership and its people and set back already minimal prospects for advancing an Israeli-Palestinian peace process. Indeed, several veteran peace process diplomats and experts express concern that, far from advancing a peace process, if the Trump administration actually unveils its peace plan in the coming months as Kushner suggested he might do, it could instead spark a new round of violence.

“I was focused initially on the internal contradictions of their [the Trump administration’s] Gaza policy,” Nimrod Novik, who long was a foreign policy adviser to Israeli leader Shimon Peres and is now Israel Fellow at the Israel Policy Forum (IPF), told Al-Monitor in an interview Tuesday. “Within the parameters they are talking about, it is going to lead nowhere.”

While Kushner and Greenblatt were traveling last week to Qatar and Saudi Arabia seeking fulfillment of pledges to develop Gazan infrastructure and boost employment, the Trump administration is cutting funds to the UN Relief and Works Agency (UNRWA) that runs the only non-Islamist schools in the Hamas-controlled territory, Novik said.

“At the same time they are out to raise funds from the Gulfies to do good in Gaza, they announce that they are going to cut off all the money for USAID and for UNRWA in Gaza,” Novik said, expressing bafflement. “How can you go to the Emiratis and say pay for Gaza and, with the same breath say, not me. I paid enough. Now it’s your turn.”

“And the funds they are talking about cutting off means, come September, a very simple thing: 270,000 Gaza students will be out of school,” Novik said. “Not just no school. The schools [that will be closed] are the only secular and non-Hamas schools in Gaza that don’t have an extreme Islamic curriculum.”

Novik said the Trump administration has also alienated Egypt with its proposal to use Gazan workers in Gulf-funded projects in northern Sinai as a way to boost Gazan employment.

“It seems everyone agreed to it except Egypt,” Novik said. “The Egyptians are hostile to the idea. They will not ever allow to create a situation where Gazans work in an Egyptian area, which is full of unemployment — or to develop Gazan dependence on Egypt when they are trying to put all the burden on Israel.”

The Trump administration approach to Gaza is steadily moving to bypass the Palestinian Authority (PA) when previously it sought to empower it there as a way to reduce Hamas’ control, said Ghaith al-Omari, a former adviser to the Palestinian negotiating team.

“We are starting to see more and more a clearer willingness to try to do stuff in Gaza and bypassing the PA,” Omari, now a fellow at the Washington Institute for Near East Policy, told Al-Monitor. “It is not their preference, but they and others in the region have a sense that the PA is not interested in playing that role,” Omari added.

“There is a growing realization that you can’t get a solution in Gaza waiting for [Palestinian Authority President Mahmoud] Abbas to come in,” Omari said.

Kushner, in his Al Quds interview, said the fact that Abbas won’t talk with his team following Trump’s Jerusalem decision won’t deter him from releasing his peace plan when he is ready. And he suggested that releasing it could prompt the Palestinian people to pressure, or perhaps even overthrow, Abbas for rejecting it.

Asked if he would reach out to Abbas on his trip to the region, Kushner said no, but that Abbas knew they were there.

“President Abbas … has said publicly he will not meet us and we have opted not to chase him,” Kushner said. “If President Abbas is willing to come back to the table, we are ready to engage; if he is not, we will likely air the plan publicly.”

But analysts warned releasing a plan with no prospect that the Palestinians will come to the table could unleash a new descent into violence.

“When the new ‘deal’ doesn’t work, matters will get worse for both Israel and the Palestinians,” Israeli analyst Yossi Alpher, writing in Forward, warned. “If you mess with the Israeli-Palestinian conflict without a winning strategic plan and an overriding commitment, the resultant failure will make matters worse. Better not to have tried.”

“They raised expectations by going out there and doing that round of region trip,” Martin Indyk, former US ambassador to Israel and Obama administration Middle East peace envoy, told Al-Monitor. “But my sense is … this is more a tin cup exercise for Gaza.”

“The chances of a peace plan actually producing anything like a viable negotiation is somewhere between zero and none,” said Indyk, adding, “Therefore, they have to find a way to get the Palestinians back in the tent. And I think that Jared’s interview was an effort to try to generate pressure on the Palestinian leadership from the people. … They are trying to find a way [through] the Arabs and then through the Palestinians to try to get Abu Mazen back to the table.”

But it’s not likely to work, Indyk said.

“I think that they are waiting for a ripening and it’s not coming,” Indyk, now with the Brookings Institution, said. “I don’t think [Israeli Prime Minister] Bibi [Netanyahu] particularly wants a plan. … But I am confident he has made sure whatever is in the plan, he can live with and won’t bring his government down. So he can say ‘yes, but I have reservations,’ and invite the Palestinians to say no.”

While Trump’s intentions to try to get the “ultimate deal” may have been sincere, his peace team appears to have been hijacked by ideologues who are not invested in it, and may be seeking to undermine any peace process, Novik said.

“A shift happened in the peace process decision-making group just before [Trump’s] Jerusalem announcement [in December], where those who are experts on the subject, led by a very bright and quick learner … Jason Greenblatt, were eased out and a different school took over, which is driven not by understanding of the region, the dynamics and complexities, but by ideology,” Novik said. US Ambassador to Israel “David Friedman has been using access to the president to bypass everyone else. Since then, you have had a situation where David Friedman and [Israeli Ambassador to the US] Ron Dermer were the axis for drafting everything. And Jason Greenblatt, who is very smart and very loyal to the president, got the message and made a 180-degree turn, and he just goes along.”