Trump turns away from the Palestinians

In a departure from past US administrations, the Donald Trump administration in a series of recent steps increasingly appears to be aligning the United States against the Palestinians on key issues in the conflict. 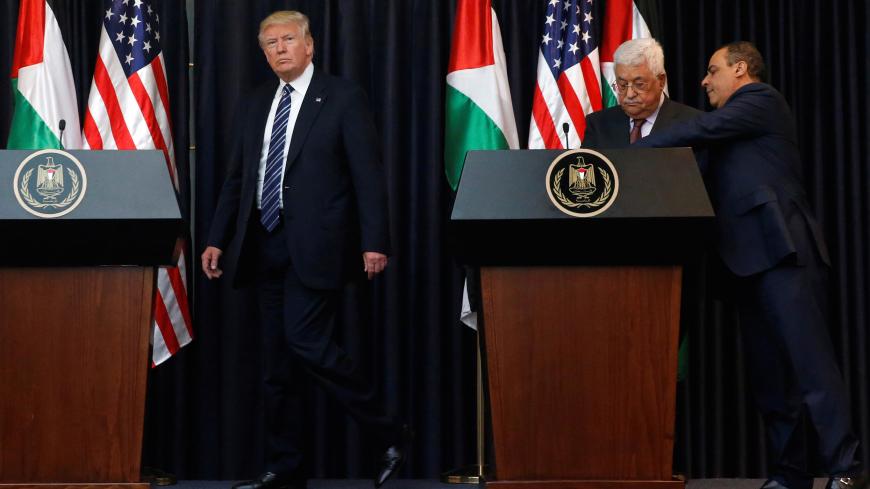 US President Donald Trump (L) and Palestinian President Mahmoud Abbas (2nd R) arrive to deliver remarks after their meeting at the Presidential Palace in the West Bank city of Bethlehem, May 23, 2017. - REUTERS/Jonathan Ernst

WASHINGTON — In a departure from past US administrations, the Donald Trump administration, in a series of recent steps, increasingly appears to be aligning the United States with Israeli positions and against Palestinian positions in key issues in the conflict, from the status of Jerusalem to the question of the right of return for Palestinian refugees. Past American administrations had said those issues were to be resolved by the two parties in the course of negotiations for a two-state solution.

Three months after moving the US Embassy to Jerusalem, the Trump administration announced last week that it is cutting $200 million in US assistance for humanitarian and development programs in the West Bank and Gaza. It has also reportedly decided that it is cutting further US contributions this year to the UN agency charged with providing humanitarian aid, schools and social services to some 5 million Palestinian refugees, after earlier cutting the agency's budget.

"Leadership is about making hard choices," Jason Greenblatt, Trump's special representative for international negotiations, said in a written statement to journalists today. "The people of Gaza, and Israelis in the area around Gaza, have suffered for far too long. It is time for the Palestinian Authority to lead the Palestinian people — all Palestinians — to a better future."

“When you look at UNRWA … there's an endless number of refugees that continue to get assistance, but more importantly, the Palestinians continue to bash America,” Haley said at a conference hosted by a pro-Israel think tank, the Foundation for Defense of Democracies, on Tuesday. “They have their hand out wanting UNRWA money.”

“So instead of the $130 million, we give them $65 million,” Haley continued. “They didn't say thank you. UNRWA had them protest in the streets that we didn't give more.”

“Our job is not to take the beatings that you give us, saying we're not kind to Palestinians and then turn around [and] pay for them,” Haley said.

The State Department said the decision, announced Aug. 24, to cut $200 million in US assistance for economic support and humanitarian programs in the West Bank and Gaza came after a Trump administration policy review that determined the support does not provide value to the US taxpayer.

“The president directed an overall review of US assistance to the Palestinian Authority in the West Bank and also in Gaza to ensure that US taxpayer dollars were being spent in accordance with US national interests,” State Department spokeswoman Heather Nauert told journalists at the State Department press briefing Tuesday.

“The decision was then made … that that money at this time is not in the best interests of the US national interest and also at this time does not provide value to the US taxpayer,” Nauert said.

While it may not say so openly, the Trump administration is systematically taking key issues in the conflict off the table with the ultimate goal of negating the Palestinian narrative, says former State Department official and peace activist Lara Friedman.

“They took Jerusalem off table, now they are taking refugees off the table,” Friedman, president of the Foundation for Middle East Peace, told Al-Monitor, referring to the Trump administration.

“The ultimate goal at a simple level is to say there are no Palestinian refugees,” Friedman continued. “Erasing the green line as a matter of policy. It is about systematically rolling the clock back, not just pre-Oslo, but pre-Madrid [the 1991 peace conference convened by the George H.W. Bush administration]. Madrid gave legitimacy to a Palestinian cause.”

If one looks at the totality of its recent steps, it suggests that the Trump administration is fundamentally realigning the United States to adopt Israeli positions in the conflict as its own, said Palestinian American analyst Yousef Munayyer.

“I think we all knew at the outset of the Trump administration that this was going to be an administration that was very much in line with right-wing Israeli fantasies,” Munayyer, with the US Campaign for Palestinian Rights, told Al-Monitor in an interview. “But it was not exactly clear how it would manifest itself in policy.”

“And then we started seeing these changes one step at a time,” Munayyer continued. “As you look at the entire pattern, what it amounts to is a systematic realignment of US policy to be Israeli policy at the negotiating table on issue after issue.”

The Trump administration is “changing the goal of these negotiations from what previously had been agreed on by previous US administrations, that the outcome is to create an independent Palestinian state alongside the Israeli state,” he said.

The United States has traditionally tried to act as a “firefighter,” discouraging steps that could inflame tensions on the ground, but now it seems to be playing “arsonist,” said Ilan Goldenberg, a former Pentagon and State Department official who worked on the Middle East peace process.

“Our role traditionally has been firefighter,” Goldenberg, who now heads Middle East programs at the Center for New American Security, told Al-Monitor. “Now we are acting like the arsonist. … Here we are encouraging them to do stupid things.”

“What they [the Trump administration] seems to be doing is coming down really hard, with all negative incentives, for the Palestinians, and all positive incentives for the Israelis, with no balance whatsoever,” Goldenberg said.

While previous US administrations have shared the Trump administration’s inclination that there is no “right of return” for Palestinian refugees, they have always said it is an issue to be determined in negotiations, said former adviser to the Palestinian negotiating team Ghaith al-Omari.

“It is the methodology that is problematic,” Omari, now a fellow with the Washington Institute for Near East Policy, told Al-Monitor. “The US position has always been … that this has to be resolved by negotiations.”

“But secondly, I think at least if you look at the statements from the administration, they believe these steps create pressure on the Palestinians to come back to the table,” Omari said. “I think this is completely misguided. … The more you try to impose a solution, the more Palestinians will entrench in their positions.”

The US funding cuts to development programs in the West Bank and Gaza and to UNRWA will also cause suffering and likely make the Palestinian people angry not at the PA and Hamas, but at America and Israel, Omari said.

Goldenberg agreed, likening the US decision to cut off funding to UNRWA with no plan for what to do afterwards to the recent controversial decision, later reversed, by the Trump administration to separate migrant children from their parents at the southern border.

“If you look at the situation on the [US southern] border, the poor kids detached from their parents,” Goldenberg said. “It’s a lot like the UNRWA situation. [The Trump administration] will take away all their money, schools, social services, [but] has no plan for what to do instead.”

Trump’s UN envoy Haley said it was the responsibility of the Palestinian Authority and Arab governments, and not that of the United States, to fix the problems in Gaza.

“We are hard at work on a peace plan that will benefit both the Israeli and Palestinian people,” the State Department official, speaking not for attribution, said. “It will be presented when the plan is complete and the time is right.”