A conference on advancing a two-state solution will convene in Paris June 3, but the United States has expressed ambivalence about the French initiative. 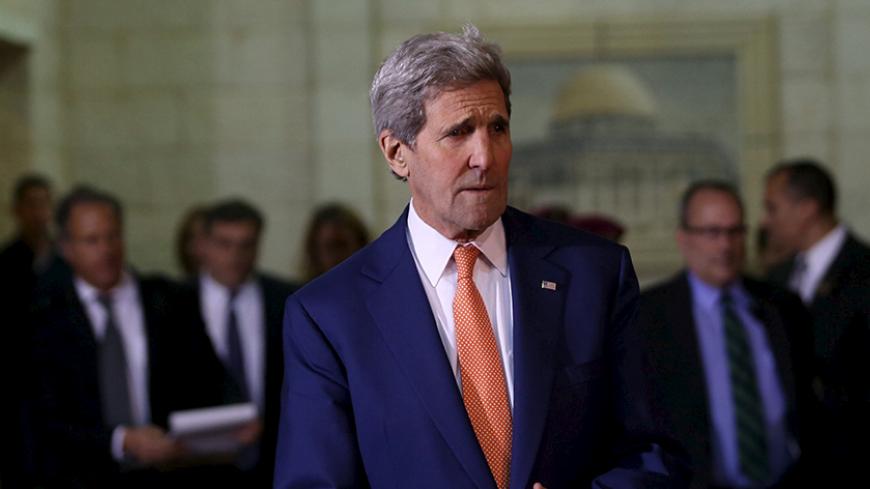 US Secretary of State John Kerry arrives to brief the media after a meeting with Palestinian President Mahmoud Abbas in the West Bank city of Ramallah, Nov. 24, 2015. - REUTERS/Mohamad Torokman

WASHINGTON — Over two dozen foreign ministers, including US Secretary of State John Kerry, will convene in Paris June 3 for an international conference on advancing a two-state solution in the Middle East, but neither Israel nor the Palestinian Authority will send envoys. While Kerry agreed to attend, the United States has expressed ambivalence about the French initiative, saying without the will of the two parties, the peace process won’t succeed. France, for its part, said it was well aware of the difficulties, but something must be done to break the deadlock and get the parties back to the table.

“The first and most important thing is that the leaders themselves in the region have got … to make some tough decisions,” State Department spokesperson John Kirby told journalists at the State Department press briefing May 30. “And they have to show in real ways, not just rhetoric, that they’re willing to take the steps necessary to get us to a two-state solution, and to date they haven’t done that.”

Kerry “is not going to turn up his nose at any good ideas that could get us closer to seeing a two-state solution in place,” Kirby said June 1. “And so he looks forward to discussing all manner of options and alternatives that might come up on Friday.”

“The Israelis and Palestinians will resolve their differences when they sit down face to face and actually engage in constructive conversations about resolving their differences,” White House spokesman Josh Earnest said May 31. “But nobody in the international community, including the United States, can make those difficult decisions for the parties. Ultimately, the parties themselves have to make those decisions.”

France’s Foreign Ministry said the June 3 ministerial meeting is a “first step” to try to revive collapsed Middle East peace negotiations and the effort deserved attention because the situation on the ground is deteriorating.

“France wanted to take this political initiative because the situation in Israel and the Palestinian territories is worsening due to the lack of prospects for negotiations,” the French Foreign Ministry said in a statement. “It is up to us to take action to recreate a political outlook which encourages renewed bilateral negotiations between the two currently deadlocked parties.”

“Each of us is well aware of the difficulties, but we cannot afford to do nothing,” the ministry statement read. “All our partners agree that the two-state solution is falling apart and that the current situation is dangerous. Our aim is to mobilize the entire international community so that it can actively support relaunching the peace process.”

Ilan Goldenberg, who previously worked on Kerry’s State Department Middle East peace team, said whatever misgivings the United States may have about the French initiative, it was better to attend than skip it.

“Probably the administration decided it is worth going, and better to be in the room than out of the room,” Goldenberg, now director of Middle East programs at the Center for New American Security (CNAS), told Al-Monitor June 1.

“The French have a couple different visions for it. Some things can be productive, some things can be unproductive,” said Goldenberg, who hosted a CNAS/Israel Policy Forum conference on security measures for a two-state solution. “If they want to use it to build consensus for parameters for a two-state UN Security Council resolution, that would seem to me a terrible idea. … You are not going to be able to get everyone to agree, with so many countries, on parameters to set up negotiations. It’s a pipe dream.”

Israeli Prime Minister Benjamin Netanyahu has angrily denounced the French initiative as unwelcome international meddling and said that the only way to proceed is to hold direct bilateral talks between the Israelis and Palestinians, without preconditions.

"The path to peace is not via international conferences that attempt to force a settlement, that make the Palestinian demands more extreme and in the process distance peace," Netanyahu said June 1, Haaretz reported. "If the countries gathering this week in Paris really want to advance peace, they should join my call to Abu Mazen [Palestinian President Mahmoud Abbas] to come to such direct negotiations. That's the path to peace. There is no other way."

Netanyahu added, "The path to peace is via direct negotiations and without preconditions between the parties. That's how it was in the past when we achieved peace with Egypt and also with Jordan and that's how it needs to be with the Palestinians.”

But perhaps partly in a bid to deflect pressure from the Paris peace conference and propose an alternative, this week Netanyahu expressed support for a modified Arab Peace Initiative, under which Israel would hold parallel discussions with the Arab League alongside Israeli-Palestinian talks.

“I take this opportunity to make clear that I remain committed to making peace with the Palestinians and with all our neighbors,” Netanyahu said in the Knesset May 31. “The Arab Peace Initiative contains positive elements that could help revive constructive negotiations with the Palestinians.”

He added, “We are willing to negotiate with the Arab states revisions to that initiative so that it reflects the dramatic changes in our region since 2002 … but maintains the agreed goal of two states for two peoples.” Netanyahu made his statement first in Hebrew and then repeated it in English, the Times of Israel noted.

While prospects for a breakthrough in Israeli-Palestinian peace talks seem dim at the moment, the attitude of the parties could change and provide an opening at a future point. Practical steps and a phased approach could be key to build trust in the interim.

“The Palestinians see the end game, 10 years from now,” Ghaith al-Omari, a former member of the Palestinian negotiating team, said at a May 31 CNAS/Israel Policy Forum conference on security measures for advancing a two-state solution. “They have no belief in this process. A phased approach, with visible change early on — this is the key to building trust. … What can be done now.”