In upbeat White House visit May 3, Palestinian Authority President Mahmoud Abbas and US President Donald Trump expressed themselves optimistic they can reach an Israeli-Palestinian peace deal that nobody thinks they will reach. 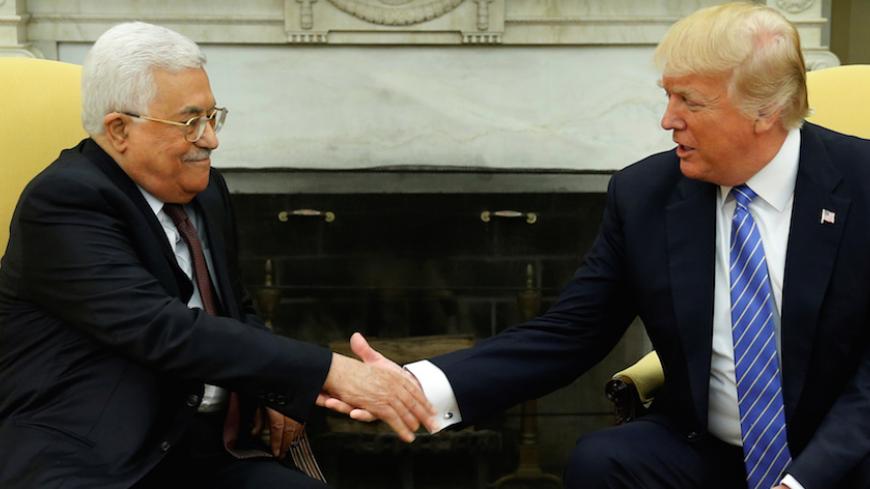 US President Donald Trump welcomes Palestinian Authority President Mahmoud Abbas in the Oval Office at the White House in Washington, May 3, 2017. - REUTERS/Jonathan Ernst

WASHINGTON — Defying expectations when Donald Trump came into office that his administration would tilt heavily to the Israeli side, Trump hosted Palestinian Authority President Mahmoud Abbas for an upbeat visit at the White House on May 3 and declared that he did not think it would be too hard to get an Israeli-Palestinian peace deal.

“We want to create peace between Israel and the Palestinians. We will get it done,” Trump said in brief joint remarks with Abbas in the White House Roosevelt Room. “And I think there's a very, very good chance, and I think you feel the same way.”

“We will start a process, which hopefully will lead to peace,” Trump said before hosting Abbas and his delegation for a lunch of halibut and beef. “Over the course of my lifetime, I've always heard perhaps the toughest deal to make is between the Israelis and Palestinians. Let's see if we can prove them wrong, OK?"

A relaxed and smiling Abbas offered just as upbeat of remarks on the prospects of reaching a deal for a two-state solution that has eluded the last several administrations going back to Bill Clinton's, and he said he was especially optimistic because of Trump’s determination and special deal-making abilities.

“Mr. President, I believe that we are capable under your leadership and your … courageous stewardship … as well as your great negotiating ability ... we believe that we can be partners … to bring about a historic peace treaty,” the Palestinian leader, speaking through a translator, said.

“Now, Mr. President, with you, we have hope,” Abbas added in English at the conclusion of their joint remarks.

Trump told reporters: “Let's see if we can find the solution. It's something that I think is, frankly, maybe not as difficult as people have thought over the years. We need two willing parties. We believe Israel is willing. We believe you're willing. And if you are willing, we are going to make a deal."

Washington Middle East peace process veterans and observers expressed mild incredulity that the only person who really seems convinced there is a chance in the current context to reach a peace deal is Trump. And they noted that even before any possible revived negotiations have gotten underway, both Abbas and Israeli Prime Minister Benjamin Netanyahu appeared to be calculating how to make sure the other one got blamed if and when it inevitably collapses.

“None of the players expects this White House is going to get this done,” Yousef Munayyer, a Palestinian-American analyst with the US Campaign for Palestinian Rights, told Al-Monitor. “So the question I think they are both dealing with is, how do you maintain your important relationship with the … president of United States, and at the same time participate in whatever process he wants to carry forward, without being perceived as the reason that it didn’t succeed.”

“The real wild card is Trump and his personality,” Munayyer said. “And nobody knows how that is going to work out. Trump is a businessperson. He approaches the deal in a way that many businesspeople do. If you are serious, we can find a mutually beneficial deal and get this thing done.”

But if he finds that his negotiating counterparts are not negotiating in good faith and are “dragging up reason after reason not to move forward, I don’t think Trump will have patience for that,” Munayyer said.

Israeli analyst and Haaretz journalist Amir Tibon agreed that the driver for a Middle East peace deal in the US administration is Trump.

“It is clear that both sides are somewhat surprised that the issue of the Israeli-Palestinian peace process is even on the president’s agenda,” Tibon said on a call with journalists hosted by the Israel Policy Forum on May 2. “When [Trump] won the election, some people in the Israeli government said this is the end of the two-state solution, the end of peace process, now annex the territories … and then out of nowhere Trump … [said], ‘Actually you have to restrain settlement building.’ And last week he had a statement: 'There is no reason' whatsoever the Israelis and Palestinians will not have peace.”

“It seems as almost a personal obsession of the president,” Tibon said. “It is not on the top of the agenda for most of his staff. … He personally wants to achieve [a peace deal], cares about [this] and thinks it could be a good achievement on his resume.”

“Even negotiations on the terms of negotiations have not even started, but the blame game is already here,” Tibon said. “Both Abbas and Netanyahu are thinking ... foremost, this doesn’t have a chance to succeed, so how do I navigate this so the other side takes the blame when this hits the wall?”

Given the current Israeli domestic political situation, “The Palestinians might have a better time,” Tibon said. “Anything [Netanyahu] agrees to with Trump can lead to his government falling apart. ... Netanyahu does not have room to maneuver this time.”

Meantime, the attention from Trump has increased Abbas’ relevance and improved his sagging political stock at home, analyst Grant Rumley said on the Israel Policy Forum call. Rumley is a research fellow at the Foundation for the Defense of Democracies.

“There is a disconnect in how Washington and Ramallah view this potential relationship,” Rumley said. “Trump wants the deal that has never been done. Abbas want the process, the platform, the stage.”

“No one at home can challenge his relevancy or legitimacy if [he is] in the [White House] Rose Garden … if he is meeting with Tillerson in Europe,” Rumley said. “For [Abbas], negotiations are a domestic track. Ultimately, they are likely destined to clash; [it is] just a question of how soon that comes about.”