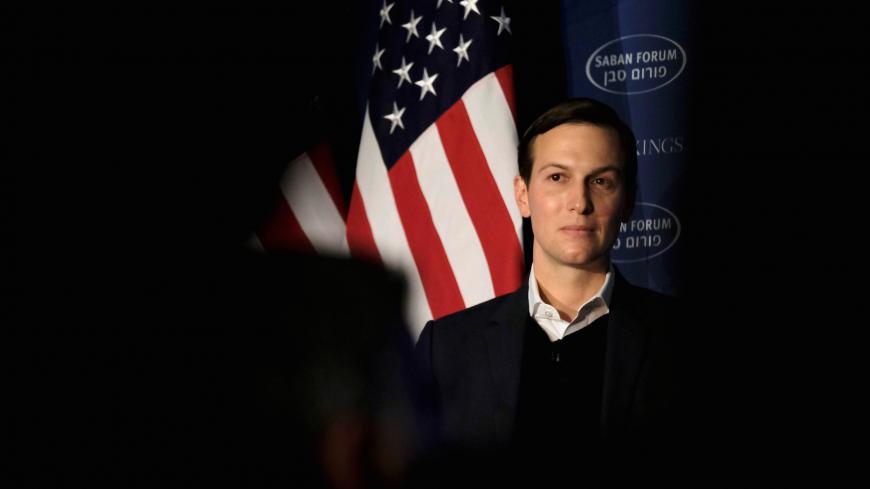 WASHINGTON — Philanthropist and host Haim Saban seemed to be trying to put his high-profile guest Jared Kushner, Donald Trump’s son-in-law and senior adviser, at ease by addressing the “elephant in the room” at the top of their keynote conversation at the Saban Forum on Sunday. But the attempt to neutralize a sensitive subject quickly proved awkward, and highlighted how much the multiple Russia investigations underway may end up hobbling Trump’s Middle East peace push, which he has tapped Kushner to lead.

Two days before the rare Kushner public appearance, Trump’s former national security adviser Michael Flynn pleaded guilty Dec. 1 to lying to the FBI about the nature of conversations he held with former Russian Ambassador to the United States Sergey Kislyak in December, and agreed to cooperate in special counsel Robert Mueller’s probe. An FBI “statement of offense” unsealed at Flynn’s plea describes Flynn being directed by a “very senior official” in the Trump transition on Dec. 22, 2016, to contact Kislyak to ask the Russians as well as other diplomatic missions to scuttle a planned UN Security Council vote on a resolution condemning Israeli settlement building. That “very senior official” was subsequently identified in media reports to be Kushner.

After introducing Kushner, Saban, the sponsor of the annual Saban Forum co-hosted by the Brookings Institution, praised Kushner’s interventions to try to derail the UN settlements resolution, which the Barack Obama administration had decided to abstain from, and urged the audience to give Kushner a round of applause. But there was only muted clapping from a few members of the audience packed into an elegant event room in Washington’s Willard Hotel, a block from the White House.

“You’ve been in the news about an issue that I want to personally thank you for,” Saban said.

“You and your team were taking steps to try and get the United Nations Security Council to not go along with what ended up being an abstention by the US, against a 50-year-old tradition,” Saban said. “To be honest with you, some people might criticize. … As far as I know, there’s nothing illegal there. But I think that this crowd and myself want to thank you for making that effort, so thank you very much.”

But Kushner went on to give a modest, self-deprecating and largely sympathetic account of his small team’s efforts to do the groundwork to try to pursue Trump’s vision for the “ultimate deal” — an Israeli-Palestinian peace deal that would make way for the normalization of relations between Israel and the Arab world. While offering few details of their vision, Kushner emphasized that he and Trump are focused on reaching a final settlement to the Israeli-Palestinian conflict — not interim solutions or trust-building exercises. He also made clear that, from his perspective, Saudi King Salman bin Abdul-Aziz Al Saud and his son, Crown Prince Mohammed bin Salman, are unwilling to make a tacit peace deal with Israel without seeing the Israeli-Palestinian conflict solved.

“When you go to [the subject of] peace in the region, from the first discussions we’ve had with the Saudis, the Israeli-Palestinian conflict is something that they care a lot about,” Kushner said. “The king and the crown prince care a lot about the Palestinian people. They believe that the Palestinian people should have the same hope and opportunity as everyone else in the world. … And this has been a big priority for the king and crown prince. … They recognize that finding a solution to this problem is the only way that can be achieved. And so they have been very committed to doing this.”

“And it’s not just the Saudis, as well,” Kushner added. “It’s really all of the people we have been talking with, whether it’s the Emiratis, the Jordanians, the Egyptians, the Qataris. We’ve see a lot of countries really pushing very strongly to see if they can create a solution there.”

Poking fun at his team being predominated by three Orthodox Jews who have spent most of their careers in real estate and bankruptcy law (including his top deputy, Jason Greenblatt — a longtime lawyer with the Trump organization — and Trump’s ambassador to Israel, David Friedman, who was previously Trump’s bankruptcy attorney), as well as Dina Powell, an Egyptian American and deputy national security adviser for strategy, Kushner said the team has spent months listening to the different sides and trying to understand their positions for how a solution might be found.

“We have done the same with the different countries that are regional stakeholders,” Kushner said. “We have tried to find a solution that comes from the region as opposed to imposing something.”

But Kushner said he did not think incremental solutions would work in the absence of a final Israeli-Palestinian deal, nor did he think Israel could achieve normalization with the Arab world without a final agreement with the Palestinians.

“A lot of the issues that come up in the relationship on a day-to-day basis are causes of not having a final status agreement,” Kushner said. “If you solve the bigger issue, then a lot of the little issues … will be mitigated over time. And so we try to get everyone focused on the bigger issue.”

“The regional dynamics play a big role in what we think the opportunities are,” Kushner said. “As the Middle East has evolved, a lot of these countries look and say they all want the same thing: They want economic opportunity, they want peace for their people, and they look at the regional threats, and I think they see that Israel, who was traditionally their foe, is a much more natural ally to them than they were 20 years ago … because of Iran, because of ISIS [Islamic State], because of extremism. And Israel has a very powerful army, they have a great economy, they have a lot of innovation in their economy."

“You have a lot of people who want to see it put together, but we have to overcome this … Israeli-Palestinian issue in order for that to happen,” Kushner said.

Pressed by Saban, Kushner declined to say whether Trump would recognize Jerusalem as the capital of Israel this week, as some reports have suggested.

Trump “is still looking at a lot of different facts,” Kushner said. “He will be the one who wants to tell you.”

Kushner came off as sympathetic but offered decidedly few details, especially since the administration had previously signaled that a roll-out of its peace plan could come early next year.

Kushner's presentation was "well-intentioned, short on details [and] remarkably similar to the contours of past administrations' plans," Shalom Lipner, a former official in the Israeli prime minister's office and a non-resident fellow at the Brookings Institution, told Al-Monitor.

A senior former Israeli security official who attended the forum told Al-Monitor that it was his understanding that the administration had decided to push back unveiling its peace plan until March. One reason for the delay may be because Prime Minister Benjamin Netanyahu, facing his own legal investigations, may be preparing for early elections, in which he may run as a peacemaker.

“There is consensus for early elections … to get a new … bulletproof political mandate before [possible] indictments are issued,” said the former Israeli security official, speaking not for attribution. Netanyahu could “run as a peacemaker, willing to embrace Trump’s peace initiative. That is [partly] why there is a delay in submitting Trump’s plan.”

Contrary to reports that the Saudis had summoned Palestinian Authority (PA) President Mahmoud Abbas to Riyadh last month to push him to accept Trump’s forthcoming peace package, the former Israeli security official said they had summoned Abbas at Egypt’s request to try to get Abbas to agree to return PLO forces to Gaza, as part of Cairo-brokered efforts to try to facilitate the PA’s control over Gaza.

“What the Saudis did is give Kushner and Greenblatt a head start,” the former Israeli security official said. “That is, they provided a menu of steps that they are willing to take in order to help the process, some in visible ways, once they see evidence Israel is for real” about peace with the Palestinians.

US negotiators “have that deposit in their pocket … what the Saudis and Emiratis are willing to do vis a vis the Israeli public to convince them regional acceptance is round the corner,” he said.

As for how Kushner’s potential legal exposure in the Mueller probe might complicate the administration’s peace efforts, the former Israeli security official said it might be able to survive his distraction or even absence. Kushner’s function has largely been “to translate the Greenblatt product to the president and … when [needed], to show up with Greenblatt and be the message” that the Greenblatt team speaks for the president.

“If you want to look for a silver lining, this administration has been accumulating pro-Israeli credentials,” the former Israeli official said. “When they table a deal, it will be very hard for this [Netanyahu] administration to say no.”