The Palestinians are hoping to engage Saudi Crown Prince Mohammed bin Salman to help in making their case to the Donald Trump administration. 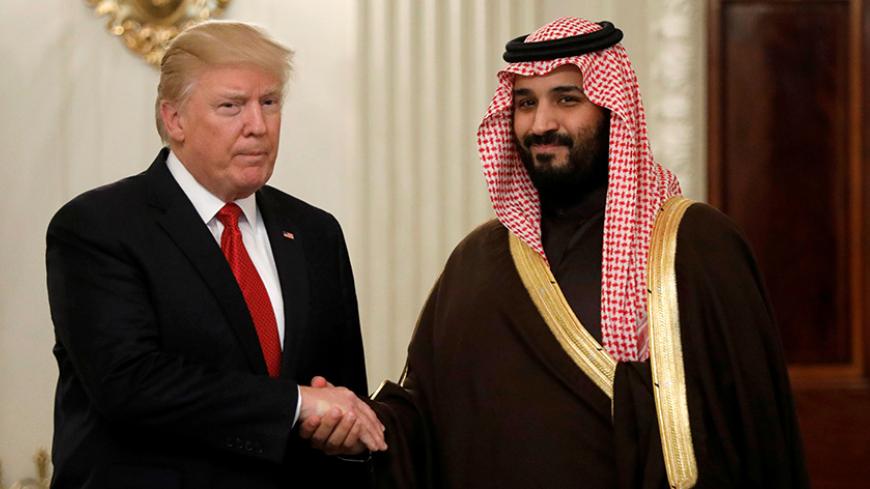 The June 21 meeting at Palestinian Authority (PA) headquarters in the West Bank city of Ramallah between Palestinian representatives and President Donald Trump’s Middle East envoys, Jared Kushner and Jason Greenblatt, left the hosts stunned. “And that’s putting it mildly,” a top Palestinian source told Al-Monitor on the condition of anonymity.

Their biggest disappointment was Greenblatt, who had previously seemed to them devoid of prejudice and also efficient and determined. They had gotten the impression at the beginning of his mission that he was not easily swayed by Prime Minister Benjamin Netanyahu, the source said. He added, however, the combination of Greenblatt and Kushner does not bode well for the Palestinians. On certain issues, the two sounded as if they were parroting Netanyahu, for instance on the subject of PA payments to the families of jailed Palestinians, including terrorists, and the incitement that Israel accuses the Palestinians of fostering in schools and the media.

According to the source, things occasionally became so heated during the approximately two-hour meeting that it seemed on the verge of a blowup. Kushner surprised the Palestinians when he hinted that there was no guarantee that Trump would insist on Israeli-Palestinian negotiations if he concluded that a diplomatic breakthrough was not a possibility. Kushner also said that Trump was waiting for the envoys’ appraisal based on their meetings in Jerusalem and Ramallah. “We felt that they were planning to lay the blame on us and not on Netanyahu, who is still building [settlements in the West Bank] and thumbing his nose at everyone, as if we are the obstacle and Netanyahu is innocent of any blame or recalcitrance,” said the source.

Up until now, every disappointment and frustration the Palestinians have encountered since Trump took office have only spurred them to seek creative and effective solutions. That was the case when they thwarted the relocation of the US Embassy from Tel Aviv to Jerusalem despite Trump’s repeated pledge to do so, when they arranged a White House meeting for President Mahmoud Abbas and when they talked the US administration into warning Israel against continued construction in the settlements.

Now the Palestinians have another target — Mohammed bin Salman, the man appointed Saudi crown prince June 21. The plan is to get the prince on board with their cause so he can help them right the unfair slant they see on the American team.

The Palestinians have been monitoring the ties developing between Israel and Saudi Arabia with American encouragement. They are certain that the wealthy kingdom, which Trump regards as an important ally in the Middle East, will play a central role in future negotiations between Israel and the Palestinians. The crown prince is 31 years old, and his elderly father, King Salman bin Abdul-Aziz Al Saud, is ailing and might entrust his son with special tasks, such as resolving the Israeli-Palestinian conflict under an inter-Arab umbrella that would also include Egypt and Jordan.

The Palestinians have no doubt that the prince is a rising star, and they believe he could have significant influence on future events in the Middle East. “He speaks our language,” the Palestinian source told Al-Monitor, noting that on many issues the Palestinians see eye to eye with the Saudis and in particular with the prince.

The Palestinians say they have already convinced the Trump administration that they firmly reject radical Islamist influence and that they oppose Iran’s activities, especially its ties with Hamas. The Palestinians also feel that in their contacts with the Trump administration they have proven that a regional diplomatic arrangement with Israel is their preferred option over an international alternative, despite the dustup with the American envoys. They think this is also the view of the young Saudi prince.

Thus, after Abbas was forced in recent months to travel back and forth to Cairo and Amman, seeking help from President Abdel Fattah al-Sisi and King Abdullah in stopping the “Trump train,” the Palestinians have now concluded that they have to sign up an influential auxiliary force — Prince Mohammed. The Palestinian assessment is that the prince serve as a counterbalancing figure, one who knows how to explain to the Americans in clear terms the red lines that Abbas cannot cross with his own people. The Palestinians believe that thanks to Trump’s high regard for Saudi Arabia and its role in the region, he or his staff will listen closely to what the Saudi prince tells them and take his remarks into consideration.

Will a close relationship with the crown prince, who will one day succeed Salman, help the Palestinians raise funds, too? This is certainly an interesting point, but the Palestinians are careful not to talk about it now, lest the attempts to get close to the prince be interpreted as motivated solely by financial considerations. In addition, since one of the points of disagreement with the Palestinians, perhaps the main one, is the issue of payments to the families of people considered to be martyrs and Palestinians jailed in Israel — a dispute currently precluding any progress in negotiations — the Saudis might be able to offer a creative solution.

In any case, now that Ramadan has ended, the Palestinian team is energetically working to set up a meeting for Abbas in Riyadh. The man tasked with making it happen is Majid Faraj, head of Palestinian General Intelligence and possibly one of the most powerful people in the PA if not the most powerful. Faraj was also responsible for forging ties with CIA Director Mike Pompeo — as demonstrated in his ability to arrange a meeting between Pompeo and Abbas in Ramallah in February — and did so in a way that resulted in warming relations between the Trump administration and the PA and that enabled Abbas’ White House visit May 3.

These relationships all hinge on defense issues. The crown prince, who also serves as Saudi defense minister, has excellent ties with Pompeo. The Palestinians hope these links will help them earn the Saudi support and understanding they feel they need after the bitter disappointment they recently endured at the hands of Greenblatt and Kushner.