President Donald Trump knows that in order to get the Saudis into a regional alliance with Israel against Iran, he must first present a peace deal between Israel and the Palestinians. 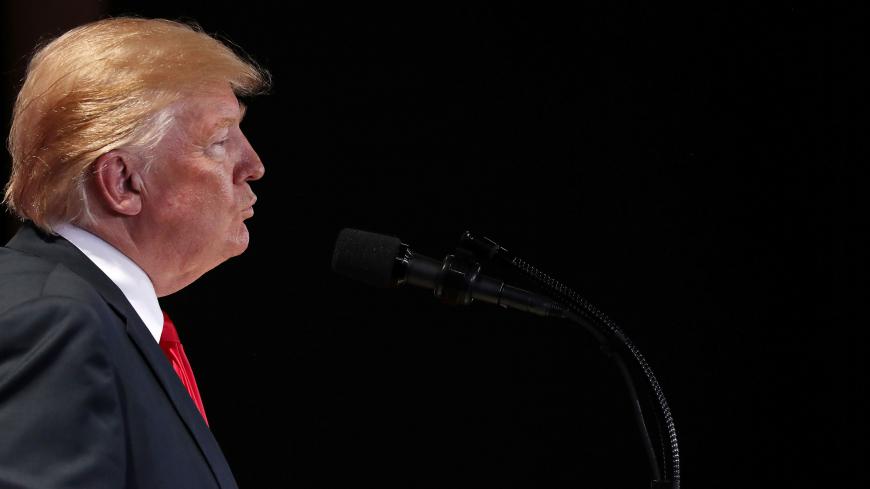 US President Donald Trump speaks during a news conference after his meeting with North Korean leader Kim Jong-un at the Capella Hotel on Sentosa Island, Singapore, June 12, 2018. - REUTERS/Jonathan Ernst

Shortly after President Donald Trump bid farewell to his new buddy, North Korean dictator Kim Jong-un, on June 12, Israel’s Channel 10 reported that the president’s son-in-law and adviser Jared Kushner and US Mideast envoy Jason Greenblatt would travel to the Middle East next week to discuss the administration’s peace plan for the region. Their itinerary includes stops in Jerusalem, Saudi Arabia and the Gulf states. The Palestinian Authority seat in the West Bank city of Ramallah is not on their schedule. For now, there is no mention of the Palestinians on the tour. An alien landing on Earth would be certain that Trump’s promised “ultimate deal” is a peace plan between Israel, the Saudis and the oil-rich Gulf states.

The alien would not be far from the truth. The prevailing view among Israeli and Palestinian officials who spoke this week with Al-Monitor is that the Trump administration views the Israeli-Palestinian conflict as a mere hurdle on the way to forging a strategic US-Israeli-Arab alliance against Iran and its proxies. According to these officials, who spoke on condition of anonymity, US Ambassador to Israel David Friedman, a stalwart supporter of the West Bank settlements, has ascertained that the deal Trump promised soon after he took office would be tailored to fit Prime Minister Benjamin Netanyahu, and too tight to the point of constricting for Palestinian President Mahmoud Abbas.

The June 10 speech Netanyahu delivered in Jerusalem to representatives of the American Jewish Congress lends credence to this scenario. “If President Abbas wants to make peace, recognize the Jewish state, for God’s sake. That will bring peace once and for all,” he said. He subsequently repeated his demand for the Palestinians to recognize Israel as the Jewish state, and demanded that the PA “stop paying terrorists.” The White House is strongly on board with both these conditions, but they do not stand a chance in Ramallah. A Palestinian leader who adopts the Zionist ethos and abandons the families of the Palestinian ethos regards as freedom fighters against Israel’s occupation would likely be signing his own death warrant. At best, he would be engineering his political demise.

In an unusually harsh op-ed in Haaretz on June 9, Greenblatt laid the groundwork for another round of the “there’s no Palestinian partner” campaign. He accused the Palestinian leadership of being solely responsible for undermining the peace process by disseminating lies and engaging in “overwrought rhetoric.” There was not a single word about 51 years of Israeli military occupation and violation of Palestinian human rights. Writing in response, chief Palestinian negotiator Saeb Erekat lambasted Greenblatt for repeatedly avoiding substantive issues during the dozens of meetings they held. He declined to discuss future borders and Israeli settlements and even a two-state solution, Erekat said. “Mr. Greenblatt, Mr. Friedman, and [US Ambassador to the UN Nikki] Haley, among others, won’t be satisfied until Palestinians endorse Zionism, renounce their political rights and sign on to apartheid,” he concluded.

Erekat could have added another name to his list: Saudi Crown Prince Mohammed bin Salman. At a late March meeting between the heir apparent and Jewish leaders in New York, he accused the Palestinian leadership of repeatedly missing all the opportunities presented to it for the past 40 years and rejecting all the proposals it had received. According to a Channel 10 report, the crown prince surprised listeners by saying, “It’s time for the Palestinians to accept the proposals and agree to come to the negotiating table, or for them to shut up and stop complaining.” He made it clear that the Palestinian issue is not a priority for his government and for the Saudi public. “There are far more pressing and more important issues to deal with, such as Iran,” he was reported as saying.

According to a lengthy expose this week in The New Yorker, the Saudi crown prince has told US officials he is willing to forge full ties with Israel and sounded keen to end the conflict, even if the Palestinians are unhappy with the terms of a deal. “Israel has never attacked us. We share a mutual enemy,” he reportedly told the Americans. The piece went on to say the administration of former President Barack Obama suspected that Netanyahu had met secretly with Gulf state leaders in Cyprus in 2015 in a bid to consolidate a united front against six powers’ nuclear agreement with Iran. According to the article, Israel and the Gulf states had recently broadened their military and intelligence cooperation against Islamist terror organizations operating in the Sinai Peninsula. Still, Netanyahu ignores a critical point. Like Ephraim Sneh wrote last April, Israel needs a regional alliance that will include Ramallah, not sacrifice it.

During his American Jewish Congress speech, Netanyahu said, “Iran has produced one good thing. It brought Israel and our Arab neighbors closer together than ever before.” Arab states, Netanyahu added, have come to appreciate Israel’s tough security policies and that “Israel can help … against the risks of terrorism.” He criticized the nuclear agreement with Iran, saying the countries that supported it are out of range of Iran’s missiles and had ignored the threats posed to Iran’s neighbors, chief among them Saudi Arabia and Israel. Netanyahu drew a direct line between the nuclear agreement with Iran and the new contacts between the United States and North Korea. “Imagine that President Trump would come back with some deal, and Britain, France and Germany would applaud it, and South Korea and Japan would say that it endangers their existence. You’d think you’d listen to this, right? So the same thing happened with the Iran deal,” Netanyahu argued.

Reading between the lines, one can sense concern that Trump, blinded by the limelight of international diplomacy, could continue in that direction, moving from a watery nuclear agreement with North Korea toward a watered-down nuclear agreement with Iran. Netanyahu may fear the American president’s unabashed desire for the Nobel Peace Prize could thus turn his “ultimate deal” for Israeli-Palestinian peace into a two-state solution that the Palestinians might accept. Having elevated him to the status of a messiah, the Israelis could then hardly accuse him of being their enemy.