Israeli Prime Minister Benjamin Netanyahu is all in favor of a regional alliance with pragmatic Sunni states, but he will do everything in his power to remove a deal with the Palestinians. 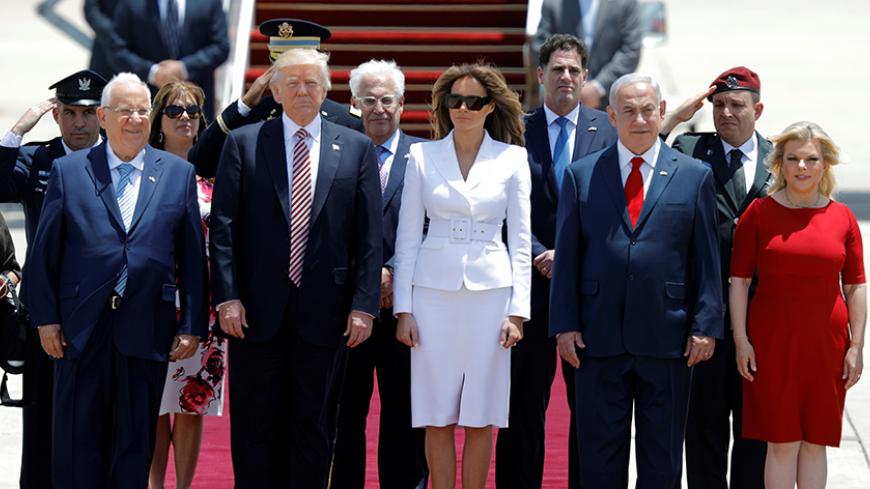 Just prior to US President Donald Trump’s arrival in Jerusalem May 22, the virtual emergency sirens that had screamed in Prime Minister Benjamin Netanyahu’s office had toned down somewhat. The chances that Trump would present his diplomatic initiative here had lessened.

The danger still exists, but on a slightly lower scale; it is no longer a "clear and present danger" (an Israeli idiom often used in the context of an imminent terror attack). Trump has more important things on his agenda, headed first and foremost by his personal political survival. Nevertheless, Netanyahu was clearly nervous in the 24-hour period prior to the American president’s arrival. The prime minister got into arguments and altercations with some of his ministers, he blew up a session of the coalition heads and he conducted a very tense Cabinet meeting on the evening of May 21. Air Force One was due to arrive the next day, and Netanyahu still had no clue who — or what — would emerge from the plane to greet him.

There is much commotion behind the scenes (not just in the political system). There are those in Israel’s security system who are also breaking their heads over the possibility of the renewal of the diplomatic process. According to a senior Israeli security source, the new concept that is being bandied around in the halls and in high-security meetings is “a regional security alliance.” This concept should be the icing on the top of the much-spoken-about “regional process.” Such an alliance should serve as a collective insurance policy of the various players, the big prize desired by all the countries that belong — directly or indirectly — to the pragmatic “Sunni bloc.” The leaders of this group are the ones who listened very carefully to the president’s speech in Riyadh on May 21.

But in order for that to happen, Israel must advance on the Palestinian circuit. In other words, renewing negotiations toward the two-state solution and showing that Israel is serious about it. The Saudis, together with additional Sunni states (mainly in the Gulf), have already agreed to adopt symbolic gestures discussed in the past, such as opening up its airspace to Israeli planes. But the “real thing” is supposed to transpire only after real progress in Israeli-Palestinian negotiations. And the “real thing” is a regional alliance involving Saudi Arabia, Egypt, Jordan, the United Arab Emirates, perhaps Kuwait — and Israel, of course.

This regional alliance would not constitute a traditional defense alliance — one that the United States will be a member of — yet it is clear that this regional alliance would be under American patronage and with full military and diplomatic American support. It would be an independent enterprise of those Middle East countries that fear the expiration date of the nuclear agreement the six world powers signed with Iran. When this agreement comes to its end, Iran will face a fortified barricade that will include Saudi-Gulf money, Egyptian military power and Israeli technological superiority. This is the dream of quite a number of secret regional heroes who are scurrying around the Mideast these days. The chances for realizing these plans now depend quite a bit on Trump’s determination and resolve. And the Trump who arrived in Israel on Monday was quite exhausted after two hectic days in Saudi Arabia.

The first to identify this possibility of a regional alliance was Ephraim Sneh, a brigadier general (res.) and former minister in various Israeli governments. Sneh, a recognized security figure in the Middle East, is known for his good relations with Israel’s Arab neighbors. After Trump’s victory in the elections, in the days when everyone buried the two-state solution and celebrated the end of the peace process, Sneh listened to an interview that Trump gave The Wall Street Journal in November 2016 in which the president-elect sang an entirely different tune. Trump talked about the “ultimate deal” that he wanted to achieve between Israel and the Palestinians. Sneh seized the opportunity and, several days later, published an article in The Huffington Post with a proposal for the same "deal” based on a compromise of the various proposals discussed by the Palestinians and Israelis over the years. He then added a pitch for a regional alliance into the deal.

Over time, the regional alliance concept made waves and circulated among the respective capitals. When attempts were made to establish a unity government in Israel with Zionist Camp leader Isaac Herzog, the regional alliance idea continued to flower. Personages such as Middle East envoy Tony Blair and other mediators also pushed forward the idea of establishing a unity government on such an initiative.

As of today, this regional alliance partly exists between Israel and the Sunni countries, in the combined efforts to halt the continued expansion of the Shiite axis under Iranian and Hezbollah leadership. Countries such as Saudi Arabia, Jordan and the United Arab Emirates are horrified about what will transpire on the “day after” the termination of the nuclear agreement between Iran and the world powers. Intelligence information (from Israel and from Western intelligence organizations) shows that Iran is continuing full speed ahead on its ballistic missile program. The Saudis are concerned that Iran will be able to launch long-range nuclear missiles only a short time after the expiration of the nuclear agreement. At that point, they would need Israeli technology and experience in order to provide themselves with a respectable defense umbrella. Many in the region feel that Iran’s expansionist goals can only be counteracted by a unity of forces between Israel and members of the Sunni bloc.

This is the theory, but a great distance separates theory and implementation of the theory. The current Netanyahu government is simply not capable of making significant concessions. The maximum it can give is very far from the minimum that Palestinian President Mahmoud Abbas could accept.

Until recently, the Saudis believed (and perhaps the Egyptians, too) that Trump could square the circle because he would scare the sides into flexibility. The problem is that today’s Trump is not like the old Trump. Even the compliment given to him in Riyadh (“a unique personality that is capable of doing the impossible”) by Egyptian President Abdel Fattah al-Sisi is more of a heart’s desire than a rational possibility.

Those in Netanyahu’s environs want to eat their cake and have it, too: They want to fudge the political process on the one hand, but strengthen the unofficial alliance with the Sunni bloc on the other. With regard to Trump, the euphoria has long since dissipated. The most interesting and promising option from Netanyahu’s point of view at this point in time is the possible impeachment of Trump and appointment of Vice President Mike Pence to the presidential role. Pence, as opposed to Trump, is a "real" Republican: a conservative and real friend of Israel, with an unwavering, well-formed worldview — which is exactly what Netanyahu wanted but did not receive.