Palestinians pinning their hopes on Sisi

Egypt wants to advance a regional security coalition that will cooperate with Washington not only in the fight against Iranian-sponsored terror, but also for ending the Israeli occupation. 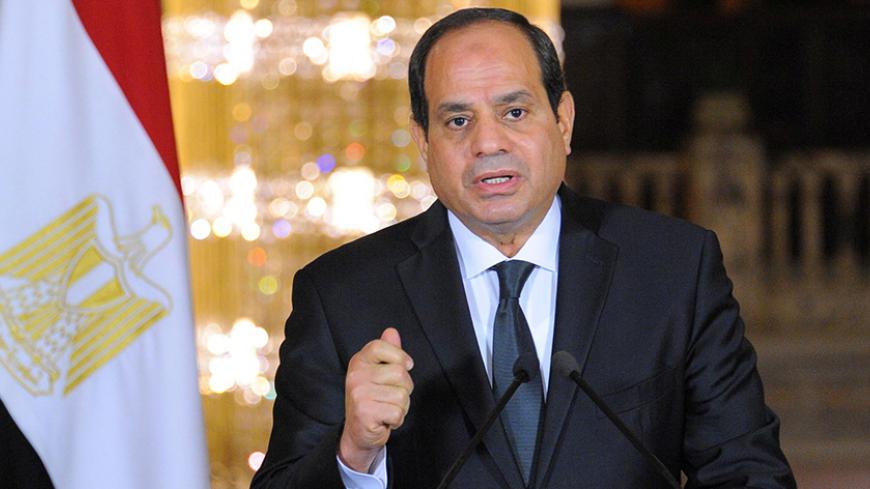 Egyptian President Abdel Fattah al-Sisi gives an address after the gunmen attack in Minya, accompanied by leaders of the Supreme Council of the Armed Forces and the Supreme Council for Police (unseen), at the Ittihadiya presidential palace in Cairo, Egypt, May 26, 2017.

The Palestinian leadership is placing its main hopes for a two-state solution process on Egypt. While Palestinian President Mahmoud Abbas is well-aware of the close relationship the Donald Trump administration has with Saudi King Salman bin Abdul-Aziz Al Saud and Crown Prince Mohammed bin Salman, Ramallah estimates that only Egyptian President Abdel Fattah al-Sisi has the operational capacity to create a pragmatic Arab coalition in coordination with Washington. This coalition would not only work to deter Iran’s nuclear and regional terror ambitions, but will also focus on advancing a peace process between Israel and the Palestinians. This was conveyed to Al-Monitor by a senior Palestinian Authority (PA) minister who also deals with security matters and has the ear of Abbas. This minister is also in contact with Egyptian intelligence officials.

Cairo's relations with Ramallah are strained over the situation in the Gaza Strip. Contrary to Abbas, who wants the weakening of Hamas, Egypt wishes to strengthen Gaza economically and politically for the sake of security stability. But despite this disputed issue, Egypt remains the main ally of the Palestinians on statehood and regional strategy issues.

According to the PA minister, Egypt’s regional vision is to shape a new pragmatic regional coalition heavily supported by the Trump administration that will uphold Egypt’s leadership role in the Arab world on all political and security matters (less so on economic issues).

The minister noted that Cairo considers Tehran to be a threat to the stability of the region, especially in Syria and Lebanon, through its own forces and Hezbollah. Sisi was the driving force behind isolating Qatar because of Qatar’s ties with Iran and its allies, including Hamas. The Egyptian president pushed for parliament to approve on June 15 the turnover of the Red Sea islands Tiran and Sanafir to Saudi Arabia, in return for generous Saudi economic assistance.

Egyptian intelligence cooperation with Israel could actually enhance regional security cooperation with Washington. According to the senior official, Sisi understands that the creation of a security coalition with the United States demands progress on ending the Israeli occupation through a two-state solution process.

The heart and minds of the Egyptian people, especially the youth, are with their Palestinian brethren under occupation. A senior Egyptian diplomat in Tel Aviv told Al-Monitor that Egypt is laboring in the diplomatic arena on behalf of the Palestinians. “Egypt has always been on the diplomatic forefront for Palestinian statehood,” said the Egyptian diplomat on condition of anonymity. He also said that the Egyptian Foreign Ministry is thinking of a new regional system in the Middle East, in which a coalition of Egypt, Jordan, Saudi Arabia and the Gulf states will set red lines for Iran and its allies in Syria, Iraq, Lebanon, Qatar and Yemen in terms of deployments of terrorist forces, the transfer of arms and finances to terrorists, and the positioning of chemical weapons. This coalition will work closely with the US administration.

Egypt sees this new regional structure — an alliance of the pragmatic Sunni states with the United States to defeat jihadi terror and end the Israeli-Palestinian conflict — as an important ingredient for both its national and regional security. Cairo is encouraged by the stronger anti-Iranian position of the Trump administration as opposed to the Barack Obama administration. In parallel, Egypt is pressing Trump’s team in the White House and in the State and Defense departments for a double diplomatic track; a track that will handle both jihadi terrorism and the Israeli-Palestinian conflict at the same time.

Egypt is interested in holding a regional summit in Washington hosted by Trump, reconfirming the principles of the May 20 Riyadh summit and launching bilateral Israeli-Palestinian negotiations. Yet according to the Egyptian diplomat, there are many obstacles on the path to such a gathering. The Arab side insists that the 2002 Arab Peace Initiative be the basis of any discussions for Israeli-Palestinian peace and regional stability. At this point, Trump refuses to accept this condition, as Israeli Prime Minister Benjamin Netanyahu is strongly opposed to the initiative.

Furthermore, Cairo is frustrated that the US administration has not yet publicly accepted the two-state solution formula. The Egyptian diplomat referred to the meetings conducted on Jan. 30 by Jordanian King Abdullah II with Vice President Mike Pence, national security adviser H.R McMaster, Secretary of State Rex Tillerson, Secretary of Defense James Mattis and presidential adviser Jared Kushner. The diplomat said that in his meetings, the king raised the same issues as Egypt, arguing in favor of the centrality of the Palestinian issue. The official added, “We have much better access in Washington with this administration than with the previous one.”

Analyzing the remarks of the Palestinian minister and those of the Egyptian diplomat, one can conclude that an intense Arab diplomatic offensive is underway vis-a-vis Washington. These diplomatic efforts are designed to link anti-Iran and terror policies with Israeli-Palestinian peacemaking. Asked about these positions, a senior Israeli Ministry of Foreign Affairs official said that Israel would accept a double process between regional security issues and the Israeli-Palestinian issue, but Netanyahu insists that the regional security cooperation precedes the Israeli-Palestinian negotiations. How does Washington see this? According to the PA minister, all sides seem to be plunged in “constructive confusion.”