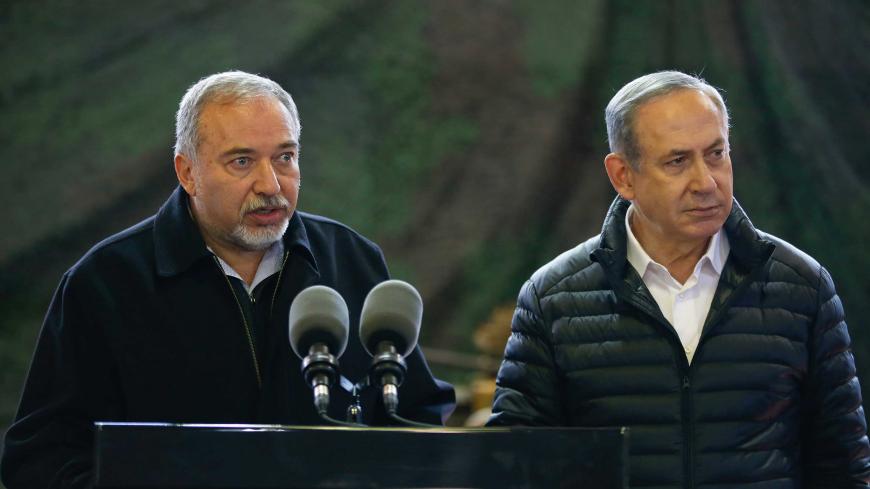 Israeli Defense Minister Avigdor Liberman speaks as Prime Minister Benjamin Netanyahu stands next to him during a visit to an army base in the West Bank settlement of Beit El, near Ramallah, Jan. 10, 2017. - REUTERS/Baz Ratner

“I think the president is fundamentally uncomfortable not keeping promises,” said US Ambassador to Israel David Friedman in a May 23 interview on Israel’s Channel 10 television news, expressing pride in his boss and former bankruptcy client, US President Donald Trump. Indeed, unlike all of Trump's predecessors who promised on the campaign trail to move the US Embassy from Tel Aviv to Jerusalem, Trump has made good on his pledge. Previous presidents repeatedly signed waivers suspending the move, as mandated by a 1995 congressional act, arguing that it would be harmful to US national security interests. Trump himself signed off on two such waivers in his first year in office, in June and December 2017. Prime Minister Benjamin Netanyahu then apparently managed to convince him that not only does the embassy relocation not damage US security interests, it actually contributes to peace. At the inauguration of the embassy in Jerusalem on May 14, Netanyahu proclaimed, “I believe it’s a great day for peace.”

Netanyahu appears to believe that a decision to expand Israeli settlements in the West Bank, even as the Trump administration prepares to present its much-touted Israeli-Palestinian peace plan, also contributes to peace. Otherwise, why is such a fearless peace warrior lending a hand to promote new construction in the West Bank?

Several hours after Friedman told Israeli television viewers that Trump was determined to move forward with what he has dubbed the “ultimate deal” for Israeli-Palestinian peace, Defense Minister Avigdor Liberman announced that the planning authorities in Judea and Samaria, that is, the West Bank, would approve the building of 2,500 new housing units. They are to be located in the settlement towns of Maaleh Adumim and Ariel, as well as in several remote settlements outside the so-called settlement blocs. On the Facebook page of Yisrael Beitenu, Liberman pledged, “We will continue developing Judea and Samaria in practice.” He, too, obviously believes that developing Jewish settlements in areas where the Palestinians seek to create a state somehow contributes to peace.

Netanyahu’s office was quick to announce that the prime minister had spoken by phone with Maaleh Adumim Mayor Benny Kashriel and congratulated him on the upcoming plans. “We are continuing the momentum to develop settlements in Judea and Samaria by authorizing thousands of new homes,” Netanyahu told him. “In the near future we will approve additional units.”

At best, the timing of the Netanyahu and Liberman announcements is a slap in the face to Trump, who has attained Messiah status in Israel. At worst, the time has come to replace Trump’s promised “ultimate deal” for Israeli-Palestinian peace with another marketing slogan — “Clearance Sale” on the two-state solution to the Israeli-Palestinian conflict and the vision of regional peace.

Upon taking office, Trump clarified his position on the Netanyahu government’s settlement policy. On the eve of Netanyahu’s visit to Washington in February 2017, the White House released a statement asserting, “The construction of new settlements or the expansion of existing settlements beyond their current borders may not be helpful in achieving … peace throughout the Middle East region.” The statement went on to say that Trump would discuss the matter with Netanyahu. Briefing reporters after their meeting, Netanyahu confirmed that his host had asked him to rein in settlement expansion and said he had promised to discuss with the administration curbs on construction in the West Bank, but not in East Jerusalem.

According to Peace Now, since Netanyahu gave his word to Trump 16 months ago, the number of new homes in the West Bank approved by his government has reached three times the number approved in the 18 months that preceded Trump’s January 2017 inauguration — that is, 14,454 compared with 4,476 during the administration of President Barack Obama.

The US Consulate in Jerusalem, not to be confused with the new embassy, is familiar with this data, reporting as it does on every tender issued for the construction of new homes in the Israeli-occupied territories. Trump's Middle East peace team — led by his son-in-law and White House adviser, Jared Kushner, together with Middle East envoy Jason Greenblatt — knows the map of the West Bank. They know that the Israeli government is moving forward with construction in areas slated to form an inseparable part of a future Palestinian state. If Israel is not coordinating its settlement activity with Trump, he will seek revenge. After all, he makes no secret of coveting the Nobel Peace Prize, which seems to be moving beyond his reach given the on-again, off-again situation with North Korean President Kim Jong Un. Trump knows that his nemesis, the American media, will be glad to portray the pledge he made of an “ultimate deal” for Israelis and Palestinians as a flop. There is, however, another possibility.

Trump’s administration had surely anticipated that the change in US policy on Jerusalem, recognizing it as the capital of Israel, would generate a crisis with the Palestinians. Did this change of heart reflect a US retreat from the Israeli-Palestinian peace process? The Trump administration’s thundering silence on the announced settlement construction could indicate that the settlers’ sweethearts, casino mogul Sheldon Adelson and Friedman, have stirred the pot to the cheers of Trump’s evangelical preachers and donors. After all, why should American real estate tycoon Trump fall out with a country, Israel, whose denizens, chief among them Netanyahu, bestow upon him much more honor and munificence than he has ever received from his own countrymen?

Even the heads of the opposition parties in the Knesset congratulated Trump for pulling the United States out of the Iran nuclear deal and hailed Netanyahu’s “major achievement” in this regard. Everyone stood in line to shake hands with presidential daughter Ivanka Trump at the embassy inauguration. Among them was Knesset member Eitan Cabel, a senior member of the opposition Labor Party, who basically said the Kaddish, the Jewish prayer for the dead, in regard to the 1993 Oslo peace accords when he called on the government several days ago to annex the “settlement blocs” along with the Jordan Valley. This leaves the question of whether it is worth it for Trump to pick a fight with his best friends over a few houses being built by a bunch of Jews on Arab land on the other side of the world.