According to a European diplomat, US Ambassador David Friedman told colleagues that the Trump administration would not present its peace plan until after the elections are held in Israel, so as not to jeopardize the right-wing hold on power. 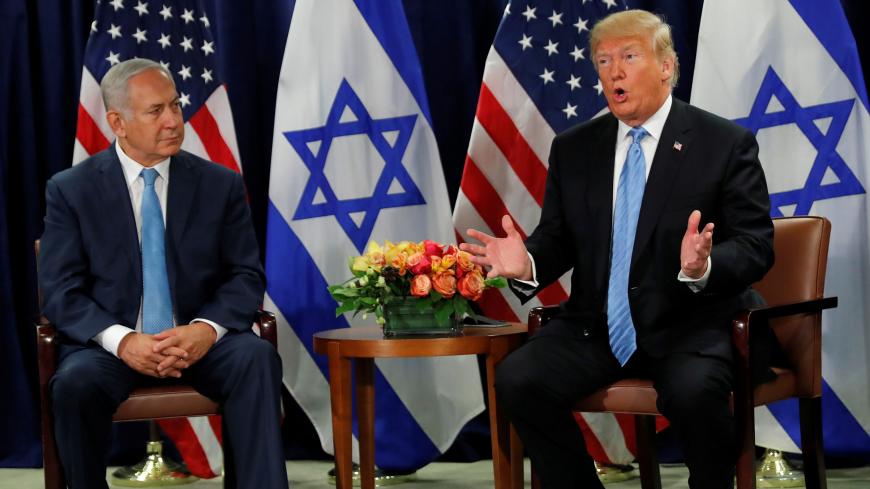 US President Donald Trump speaks during a bilateral meeting with Israeli Prime Minister Benjamin Netanyahu on the sidelines of the 73rd session of the United Nations General Assembly at UN headquarters in New York, Sept. 26, 2018. - REUTERS/Carlos Barria

The state of relations between the Trump administration and the government of Benjamin Netanyahu is becoming increasingly reminiscent of the story told about an initiative by the Israeli Embassy in Washington and Israel supporters in Congress to add Israel to the United States as its 51st state. “God forbid,” Netanyahu cables his ambassador in Washington. “Are you nuts? Drop this stupid idea. You want to leave us with only two senators?”

Mossad Director Yossi Cohen, the man charged with Israel’s clandestine diplomacy, spoke this week about a positive change, “at the highest level, which we find very pleasant” in the US approach to Israel since President Donald Trump took office. Speaking at an Oct. 22 Finance Ministry seminar, Cohen said, “There is some sort of feeling, which I share, that the differentiation [by the Trump administration] between the good guys and the bad guys is more dichotomous, simpler and clearer.”

Cohen was referring to the change in the administration’s position on Iran, supposedly a consensual diplomatic-strategic issue. However, the inflationary use that Prime Minister Netanyahu is making of the “Iran threat,” raising “the bomb” at every rally ahead of the upcoming Oct. 30 municipal elections and at each campaign event in Likud Party branches, has turned the issue into a political matter. Seniors in Israel’s defense and academic echelons believe that Trump’s differentiation between the good guys and the bad guys in the Iran nuclear story is way too dichotomous and simplistic. As mentioned in an Al-Monitor article, Israel Defense Forces Chief of Staff Gadi Eizenkot and former diplomacy-defense coordinator Maj. Gen. Amos Gilad believe the agreement between world powers and Iran on its nuclear program is better than no agreement, despite all its faults.

“The differentiation between the good and the bad” — to quote the Mossad director — does not apply only to the Iranian arena. It is also implemented in the Israeli-Palestinian channel. Thus, the Trump administration decided to relocate its embassy in Israel to Jerusalem and to ignore new Israeli construction in its West Bank settlements, and at the same time to shut down the Palestinian mission in Washington and to cut aid to the Palestinian Authority (PA). The first two decisions favored the Netanyahu government, while the other two punished Palestinian President Mahmoud Abbas.

Similarly, the “differentiation” was heard loud and clear in the Trump administration’s silence over Israel’s detention of American student Lara Alqasem and its decision to expel her (until the Supreme Court vacated the decision) in relation to the anti-Israel boycott. The US Embassy in Israel refused to respond to Al-Monitor’s questions regarding its handling of the affair, if any.

Alqasem’s attorney, Yotam Ben-Hillel, told Al-Monitor that US consular officials had visited her twice at the airport detention facility where she was held, but only to ask her how she was and how her legal case was going. “They said they could not intervene for her release or protest her detention,” Ben-Hillel said. Had an American student been arrested by the PA for allegedly calling to halt US aid to the Palestinians, there is no doubt the United States would have been incensed.

A European diplomat told Al-Monitor on condition of anonymity that this “differentiation between the good and bad guys” does not stop at US foreign policy. His remarks indicate that the Trump administration also applies this approach in the domestic Israeli political arena. The diplomat told Al-Monitor that briefing foreign diplomats stationed in Israel recently, US Ambassador David Friedman said the administration would not present its Israeli-Palestinian peace plan — touted by Trump as the “ultimate deal” — prior to the Israeli elections expected to be held next spring (if, indeed, they are moved up from their scheduled November 2019 date). Friedman explained the delay by saying that unveiling the long-awaited plan, which obviously includes Israeli concessions to the Palestinians, would likely meet opposition by the rightist HaBayit HaYehudi party and the hawks in Netanyahu’s Likud. This, in turn, could result in the downfall of the Netanyahu government and even endanger the right wing’s hold on power. The US Embassy declined to confirm or deny the information.

On Oct. 22, the day after Al-Monitor’s conversation with the European envoy, Channel 10 reported that Trump told French President Emmanuel Macron at their late September meeting in New York that the United States would unveil its peace plan within “the coming months.” The channel’s diplomatic affairs correspondent Barak Ravid reported that the US president told his French colleague he tends to agree with him that Netanyahu is in love with the status quo and does not really want progress in the peace process. Trump noted that he could “be tough" with Netanyahu regarding the peace plan, just as he was toward the Palestinians, having relocated the US Embassy to Jerusalem and given Israel $5 billion a year (to be exact, $3.8 billion annually, most of it to buy American weapons).

Three days after that meeting, on Sept. 26, Trump announced for the first time in no uncertain terms that he supports a two-state solution to the Israeli-Palestinian conflict, even adding that Israel would have to “do something good” for the Palestinians now that it had gotten its way with US recognition of Jerusalem as its capital. But Israel’s government did not offer “something good” for peace with the Palestinians; what it actually did was to approve and fund a new Jewish neighborhood in the occupied Palestinian town of Hebron. Friedman was most likely struck dumb by the decision.

Reports that the French Foreign Ministry is formulating a new Israeli-Palestinian initiative suggests Macron is not counting on Trump, who changes his mind as often as he changes his socks. The Israeli-Palestinian conflict is not a factor in domestic politics in France and other leading European Union member states, in sharp contrast to its impact on internal American politics. They are not bothered that a fair and logical peace blueprint might hasten the end of the Netanyahu regime. Europe has been content to play a supporting role on the Israeli-Palestinian stage, leaving center stage to successive American presidents. It never tried to claim a seat at the head of the Middle East negotiating table. However, no American president in memory has broken so many rules of the game with Europe in such a short while: from his decision to withdraw from the deal with Iran and to recognize Jerusalem as Israel’s capital, to cutting the administration’s NATO budget and eroding US trade pacts with its neighbors and allies.

It turns out that Europe views the “differentiation between the good guys and the bad guys” in a far more complex and nuanced manner than does the occupant of the Oval Office, much to the dismay of the Mossad director’s boss — Netanyahu.