The recently signed agreement over Uzbeki nursing staff traveling to Israel only highlights the rapid growth in economic, diplomatic and cultural relations between the two countries. 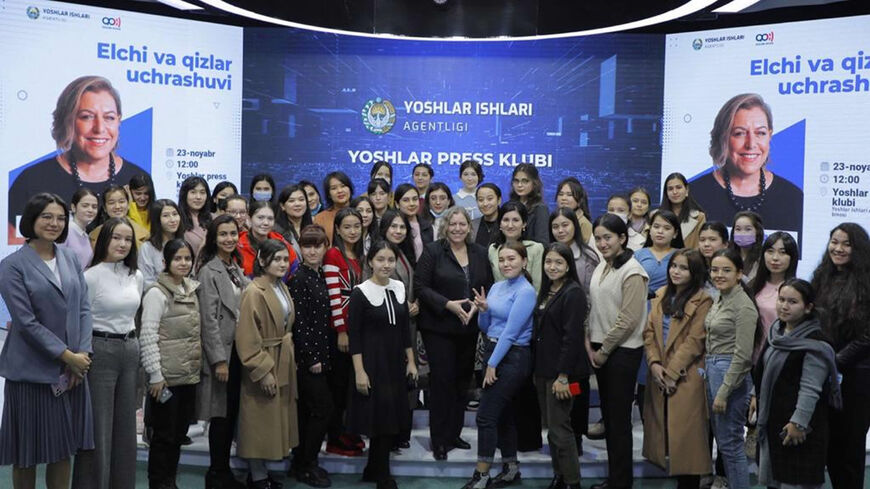 Israeli Ambassador to Uzbekistan Zehavit Ben-Hillel together with students at Webster University in Tashkent, Uzbekistan, November 2021. - Israeli Embassy in Tashkent

Israel’s Interior Minister Ayelet Shaked and the adviser to the Uzbek prime minister, Kharidin Khardinov, signed July 27 a bilateral agreement, which will regulate the recruiting and bringing into Israel of Uzbek nursing staff. Representatives of the Israel Population and Immigration Authority, Israel’s Foreign Ministry and Ministry of Welfare and Social Affairs, and a large official Uzbek delegation were also present at the signature ceremony.

“Today I signed a bilateral agreement with the representatives of the Uzbek government that will bring great news to the nursing industry. Thanks to this agreement, our dear ones who need nursing care will be assisted by skilled caregivers, who will provide dedicated and appropriate care,” said Shaked after signing.

Zehavit Ben-Hillel was appointed Israel’s new ambassador to Uzbekistan in July 2020. Since then, she has been working hard to expand and deepen bilateral relations, with several achievements. Expert in public diplomacy and passionate about history, Ben-Hillel has crisscrossed Uzbekistan, initiating cooperation and encounters not only between governments and industries, but also between social societies.

“We definitively see bilateral relations growing and being upgraded. This week, an agreement was signed regulating the employment in Israel of nursing staff from Uzbekistan. It is a major achievement for both countries — for Uzbekistan, which is interested in sending migrant workers to Israel, and, of course, for Israel, which needs quality personnel in the field of nursing and welfare. We hope that the success of the cooperation in the field of employment of nursing staff will lead to its expansion to other fields of employment in the future,” Ben-Hillel told Al-Monitor.

Uzbekistan is an important country for Israel, for several reasons.

It is a Muslim-majority state with solid ties with Israel well before the 2020 signature of the Abraham Accords. In parallel, Uzbekistan maintains strong ties with Iran, and dialogues with the Taliban in Afghanistan. Uzbekistan recognized the Palestinian state in 1994. This year, it celebrated 30 years of diplomatic ties with Israel. As of 2018, Israelis do not need a visa to enter Uzbekistan.

The Jewish community in Uzbekistan is ancient, and was located mostly in the Bukhara and Samarkand areas. Some say it dates to the first Jerusalem Temple. Descendants of this community, who immigrated to Israel and to the United States, are deeply committed to enhancing diplomatic and commercial ties between their homeland and the Jewish state.

“Israel sees Uzbekistan as a leading factor in the Central Asia region. An extensive dialogue in many fields takes place between the two countries. Last May, we held in Tashkent the seventh round of bilateral diplomatic consultations, and as was the case in prior rounds, we were able to deal with a variety of issues, including regional and strategic ones. Both sides are eager to deepen the dialogue,” Ben-Hillel noted.

Cooperation between the two countries takes place mainly within the framework of Mashav, which is Israel’s main development cooperation arm (within the Foreign Ministry). With Mashav, the Israeli Embassy in Tashkent promotes a variety of projects, including in the fields of health and the environment, and treatment of people with disabilities.

“There is great appreciation in Uzbekistan for Israeli innovation in almost every field. Earlier this year, together with Mashav, we brought to Israel from Uzbekistan a senior delegation from their Innovation Authority, who held many meetings with various parties, with the aim of bringing to Uzbekistan Israeli initiatives and knowledge. In September, Mashav head Ambassador Einat Schlein will visit Uzbekistan. During her visit, a memorandum of understanding is set to be signed between Israel and Uzbekistan, anchoring development ties between the two nations,” Ben-Hillel said.

The issue of water is especially important for Uzbekistan in its relations with Israel. Over the past few years, Uzbeki authorities have encouraged cotton growers to adopt the Israeli-invented drip irrigation. Uzbekistan is also interested in Israeli water storage methods and technologies, especially on the backdrop of ongoing drought it is suffering from.

A trade mission from Uzbekistan visited Israel at the end of June, to explore cooperation in these and other fields. The volume of trade between the two countries stood over the past couple of years at an annual average of $40 million, but both governments believe these could be greatly expanded, not only in the sector of agricultural technologies, but also with mutual tourism, education and medical initiatives. Ben-Hillel said she definitively sees an increasing involvement of Israeli companies in these areas, and hopes that the volume of activity will continue growing.

Israel’s Tourism Minister Yoel Razvozov visited Uzbekistan in May. During the visit, Razvozov and Deputy Prime Minister, Minister of Tourism and Cultural Heritage Aziz Abdukhakimov signed an agreement to strengthen tourism relations. Among other things, the document envisages an increase in mutual tourist flow, an increase in flights and strengthening partnerships between representatives of the tourism business.

While in Tashkent, Razvozov tweeted, “Had a productive discussion with the acting Minister of Foreign Affairs of Uzbekistan. We agreed to expand our partnership in economy, tourism, water and agriculture. We also discussed the importance of cooperation to fight radicalism and terror.”

The Bukhara Jewish community, believed to have existed for more than 2,000 years, currently numbers only a few hundred. In this regard, Ben-Hillel said, “Uzbekistan is the country of origin of Bukhara Jews, an old and culturally rich community. Although most of the Jews immigrated from Uzbekistan, they maintain their ancestral traditions, serving as a bridge between the countries. Many of them visit Uzbekistan time and again. Uzbekistan is an excellent destination for Israeli tourists in general, for its colorful markets, rich cuisine, and of course the history and architecture of the Silk Road. The promotion of mutual tourism was discussed during the visit last May in Tashkent of Tourism Minister Razvozov.”

Ben-Hillel said that she has been enjoying in Tashkent the scenery, historical vestige and cultural heritage Uzbekistan offers its visitors. “Working in Uzbekistan is rewarding, as both countries are keen on advancing our relations,'' she added.