Taking relations with Ankara one step at a time, Jerusalem could opt for a soft-diplomatic multi-national alliance with Turkey, Azerbaijan, Uzbekistan and Kazakhstan. 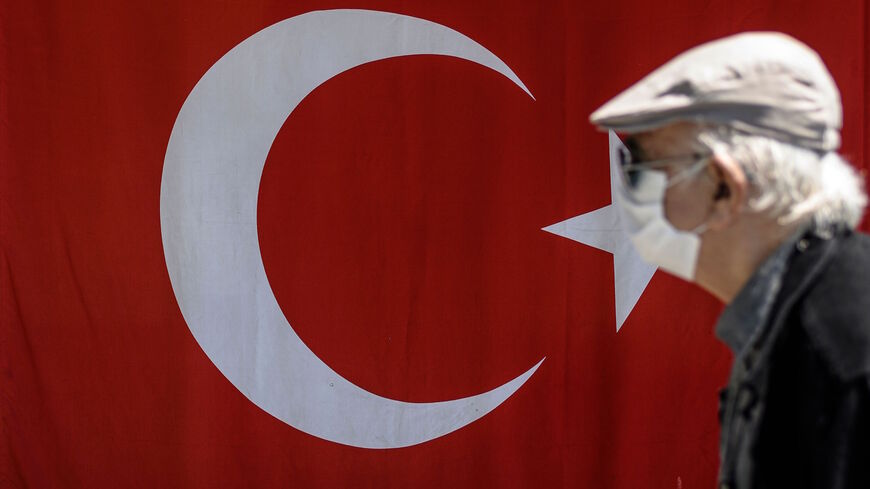 An elderly man wearing a protective face mask, walks past the Turkish flag on May 10, 2020, at Besiktas in Istanbul. - OZAN KOSE/AFP via Getty Images

The two met at a dinner hosted by Azerbaijan ambassador to Washington Khazar Ibrahim, who also invited the ambassadors from Uzbekistan and Kazakhstan.

It was an unusual event. Israel maintains diplomatic relations with all the four countries, but ties are complicated.

With Turkey, relations have been cold for over a decade, though Turkish leadership has been trying in recent months to change that. Turkish President Recep Tayyip Erdogan had called Israeli President Isaac Herzog twice, first to congratulate him on taking office, and then to express his condolences for the death of his mother. Herzog called Erdogan to wish him well after the Turkish leader got infected with coronavirus. In recent days, Erdogan said more than once that he expects a visit from Herzog in Ankara next month.

Bilateral ties with Azerbaijan have been particularly warm for many years. Still, following the Nagorno-Karabakh 2020 conflict and accusations by Armenia that Israel supplied its rival with attack drones and other weapons, these ties have come under public scrutiny.

Relations with Uzbekistan are of particular importance to Israel because of its proximity to Iran. The Jewish community there is one of the oldest in the world, and the two countries have nurtured development cooperation projects in recent years. As token of friendship and support, Israel’s ambassador to the country, Zehavit Ben Hillel, delivered a significant contribution of anti-COVID medical equipment to the children’s hospital of Tashkent last month.

Reportedly, Malcolm Hoenlein, the executive vice chairman of the Conference of Presidents of Major Jewish Organizations, was the one who initiated the meeting, after discussing it beforehand separately with all parties. His idea was simple – to build up a soft-diplomacy alliance in fields such as cultural exchange or preservation of Jewish heritage in central Asia. When such a cooperation would be put in place, the five countries could move to more ambitious multinational cooperation in trade, energy and even security.

For Jerusalem, the idea is interesting. Deepening alliances with Azerbaijan, Uzbekistan and Kazakhstan is strategically important because of Iran, but also because of other issues such as purchasing oil, selling security equipment, and enhancing Israel’s trade relations. Getting Turkey into the picture, of course, has an added value for Israel. It would enable Jerusalem to test the Turkish water and see if Ankara is really sincere in its statements in favor of rapprochement.

These statements, and the amicable phone calls placed recently between the two presidents, were indeed put to test yesterday. Speaking to reporters Feb. 8, Turkish Foreign Minister Mevlut Cavusoglu said, "Any step we take with Israel regarding our relations, any normalization, will not be at the expense of the Palestinian cause, like some other countries," apparently referring to the normalization agreements signed between Israel, the United Arab Emirates and Bahrain.

Another negative sign was the Turkish decision yesterday to charge 16 people, among them Palestinians and Syrians, for espionage. The decision followed the arrest last October of these students, with Ankara announcing it had cracked a Mossad spy network. Israeli experts and media claimed from the beginning the affair was fabricated, and that Mossad did not operate any such ring. Jerusalem now wonders what’s really behind this decision, and how come Cavusoglu made his rather negative statement exactly on the same day as the indictment.