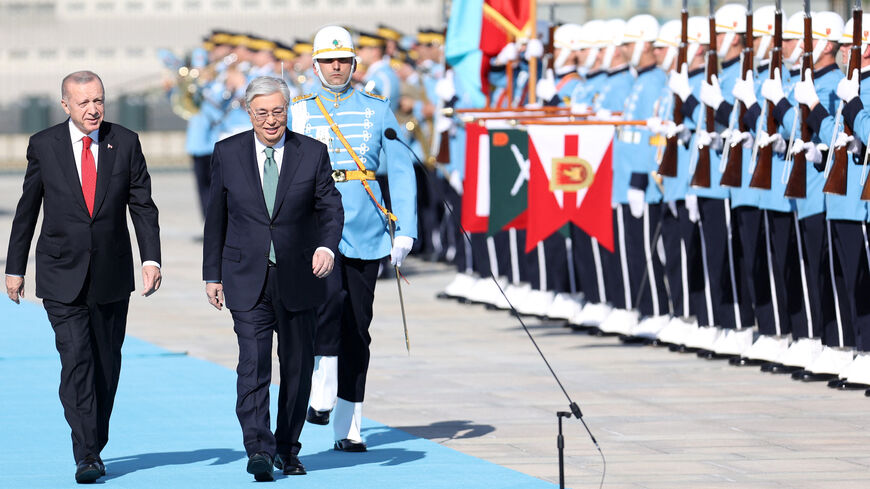 Turkey and Kazakhstan signed an agreement to start co-producing Turkey’s Anka drones in Kazakhstan during the first-ever state visit of Kazakhstan President Kassym-Jomart Tokayev to Ankara.

The memorandum of understanding signed between Turkish Aerospace Industries (TUSAS) and state-owned Kazakhstan Engineering foresees the joint production of Anka — a medium-altitude, long-endurance, unmanned aerial vehicle (UAV) — by Turkish and Kazakh experts. This makes the energy-rich Central Asian state the first to produce these reconnaissance-strike drones outside Turkey.

Besides joint production, the sides plan to assemble unmanned aerial vehicles and hand over production technologies to Kazakhstan, according to the statement by TUSAS. Last year, Turkey sold three Anka drones (which have far less international fame than the Bayraktar TB2 fighters used in Ukraine) to Kazakhstan following a defense agreement in May.  Another three Anka drones were reportedly sold to Tunisia in an $80 million deal.

“This deal with Kazakhstan is an important gain for Turkey vis-a-vis China and Russia, both of which compete for political influence and economic dominance in Kazakhstan and have their own drones,” Ozgur Eksi, editor-in-chief of online defense portal TurDef.Co, told Al-Monitor. “This joint production plant may be a foothold to defense industry to Central Asia and former Soviet republics.”

Eksi maintains that the Anka drones had long been part of the defense industry agenda between Ankara and Astana. “They caught the Kazakh military’s eye at the Kazakh Defense Fair, Kadex, almost a decade ago. This is a large but scarcely populated country, and it wants to be able to control its airspace. These drones — which fly at medium altitude, cover a large area and can stay long in the air — are well suited to the Kazakh needs of reconnaissance and surveillance,” he said.

The joint-production announcement comes on the heels of Tuesday’s “enhanced strategic partnership” memorandum between Turkish President Recep Tayyip Erdogan and Tokayev on May 10. The two presidents also oversaw the inking of 15 accords in widely divergent areas such as cooperation between communication agencies and exchange of military intelligence.

“This first state visit by Tokayev ever since he took office is a confidence-bolstering one between the two countries,” professor and director of the Ankara-based Foreign Policy Institute Huseyin Bagci told Al-Monitor. “Tokayev signals that the bilateral ties with Turkey will remain a priority for him, as it had been with Nursultan Nazarbayev, his mentor.”

Bagci maintains that Ankara is also extending a similar message to Astana. “Ankara’s relationship with Uzbekistan (Kazakhstan’s neighbor and rival for regional leadership) has gained a new momentum, particularly with Erdogan’s visit to Tashkent last month, when the sides heralded their comprehensive strategic partnership,” he said. “Tokayev’s visit gave the opportunity to Turkey to rekindle its strategic partnership with Astana and reaffirm Kazakhstan’s key role in the Organization of Turkic States.”

The visit, marking the 30th anniversary of the establishment of bilateral ties, was filled with mutual compliments and diplomatic niceties. “We have elevated our cooperation to the enhanced strategic partnership level with the joint memorandum we have just signed. Turkey and Kazakhstan, which draw strength from their shared history, language, religion and culture, are two brotherly countries with long-standing relations,” Erdogan said. In turn, Tokayev, a career diplomat, referred to Turkey as a very important strategic partner for Kazakhstan and to Erdogan as “a wise and respected statesman with a vision.”

Taking a break from official talks, the two leaders played a table tennis match in a move intended as a charm offensive to Tokayev, an accomplished player who held the chair of the Kazakh Table Tennis Federation for 13 years.

Erdogan also praised Tokayev’s leadership when his oil, gas and uranium-rich but landlocked country was rocked with unrest in January due to fuel price hikes, labor unrest and long-term grievances on inequality. The unrest spiraled into mass disturbances and looting that led to the worst bloodshed in the former Soviet state's 30 years of independence. Offering condolences for those who died in the protests, Erdogan said, “The perseverance and will President Tokayev has displayed to shape the New Kazakhstan is praiseworthy. We support the comprehensive reform program implemented in this regard and stand ready to do our part for the stability, peace, security and prosperity of this brotherly country.”

Many analysts believe that Turkey was caught off guard when unrest spread across Kazakhstan. “Turkey was unprepared for this uprising [and] the quick departure of the Nazarbayev regime, as they thought that Nazarbayev had fully consolidated authoritarian rule,” Gul Berna Ozcan, an academic who specializes in Central Asia at the School of Business and Management, Royal Holloway, University of London, told Al-Monitor. The fact that Tokayev turned to the Russian Collective Security Treaty Organization (CSTO) to help Kazakhstan overcome what he called “the terrorist threat” was seen as undermining, if not a downright snubbing, the Organization of  Turkic States (OTS) and Turkey’s leadership role.

Others say that it would be unrealistic to imagine that OTS could have played a similar role to CSTO, a military alliance created by Russian President Vladimir Putin to mirror NATO. “OTS neither has a military force nor such a mandate, so there does not seem to be an ‘either CSTO or OTS’ situation there,” Isik Kuscu, associate professor of international relations at METU and a Kazakhstan expert, told Al-Monitor.

“Ties with Turkey are an important pillar in Kazakhstan’s decadeslong multivector foreign policy, particularly vis-a-vis the two larger powers, China and Russia. With the growing concern among the Kazakhs following Russia’s invasion of Ukraine and some Russian politicians’ claims on Kazakhstan’s northern territories, warmer ties with Turkey seem even more relevant,” Kuscu said.

Speaking at the press conference on the Ukraine crisis and the importance the two countries attach to Ukraine’s sovereignty and territorial integrity, Erdogan said that the two countries were on the same page. He also underscored that the Ukraine crisis had shown the need for “solidarity and cooperation” among the Turkic states both at the bilateral level and within the Organization of Turkic States.

The Organization of Turkic States, founded under the name “Turkic Council” in 2009, was strongly supported by Nazarbayev. Its founding members consisted of Turkey, Azerbaijan, Kazakhstan and Kyrgyzstan. Uzbekistan joined in 2019, and Turkmenistan, which follows a policy of permanent neutrality, joined the organization as an observer at the Istanbul summit. EU-member Hungary has observer status. For cynics, the organization looks like an autocrats’ club. Its advocates — and there are many in Turkey’s diplomatic circles — say it offers an institutionalized platform where participants take up critical issues such as infrastructure, energy and transportation through economy-focused pragmatism rather than ethnic idealism.

President Erdogan maintained his “business-first” tone with Tokayev, saying that the sides planned to double the bilateral trade volume from the current $5 billion to $10 billion — exactly the same amount he pronounced with Uzbekistan during his Tashkent visit.

In March, Deputy President Fuat Oktay visited Kazakstan and attended a business forum that gathered more than 250 representatives of business, government agencies and the quasi-public sector from the two countries to seek ways to strengthen bilateral business ties. Ten commercial agreements worth $500 million were signed at the forum, including building transport and logistics centers with air cargo in western Kazakhstan and a pharmaceutical plant in Almaty, the Astana Times reported.