Ankara has offered "all kinds of support" to help restore order after the central Asian nation was rocked by violent protests. 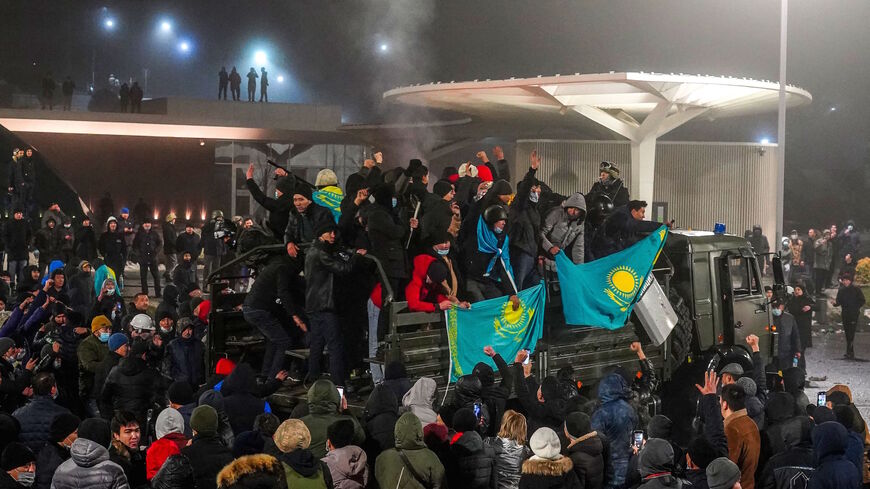 Protesters take part in a rally over a hike in energy prices in Almaty on January 5, 2022. - ABDUAZIZ MADYAROV/AFP via Getty Images

Turkey has offered — belatedly — to support Kazakhstan in helping to restore order to the central Asian nation that has been rocked by violent protests triggered by a hike in fuel prices and underpinned by a power struggle between rival ruling clans.

Turkey’s Foreign Minister Mevlut Cavusoglu told a meeting of his governing Justice and Development Party (AKP) over the weekend, “Turkey hopes that Kazakhstan will attain stability and peace as soon as possible. For this, Turkey and the Organization of Turkic States will lend all kinds of support.” Cavusoglu was referring to the Istanbul-based international group formed by Turkey and the former Soviet states of Azerbaijan, Kazakhstan, Kyrgyzstan and Uzbekistan with which it shares ethnic and linguistic ties.

Turkey’s Defense Minister Hulusi Akar echoed the offer, saying, “Kazakhstan is an important ally of Turkey, and we hope for the earliest possible stabilization of the situation and ensuring law and order in this country. If Kazakhstan makes any request to Ankara, we will be ready to provide it in full.”

Turkey’s deployment of troops to Libya to defend the internationally recognized government in Tripoli from attack by a Russian-backed eastern warlord and its intervention on the side of Azerbaijan against Armenia allowing the former to wrest back large chunks of occupied territory around the contested Nagorno-Karabakh enclave might prompt the uninitiated to ask whether it’s offering to do the same for Kazakhstan. Besides, what could be more natural than for Turkey’s authoritarian President Recep Tayyip Erdogan to extend a helping hand to a fellow despot seeking to quell nationwide protests against his rule?

The dynamics at play in Kazakhstan are far more complex than a simple popular backlash against corruption and mismanagement. They likely caught Turkey off guard analysts say, with its longtime partner, the former President Nursultan Nazarbayev, on the losing side and Russia, the ultimate winner.

Nazarbayev is said to have played a key role in helping repair relations between Erdogan and Russia’s President Vladimir Putin following Turkey’s downing of a Russian plane over Syria in 2015.

“Turkey was unprepared for this uprising [and] the quick departure of the Nazarbayev regime as they thought that Nazarbayev had fully consolidated authoritarian rule,” noted Gul Berna Ozcan, an academic who specializes in Central Asia at the School of Business and Management, Royal Holloway, University of London.

This might explain why it took Turkey so long to formally respond.

Nazarbayev’s handpicked successor, President Kassym Jomart Tokayev, who blames the unrest on foreign provocateurs and called it a “coup attempt,” turned the tables on his mentor-turned-rival, calling on the Russian-led Collective Security Treaty Organization (CSTO) to “help Kazakhstan overcome this terrorist threat.” Thousands of Russian troops have since deployed across the country. “Russia at the invitation of the Kazakh government has effectively occupied Kazakhstan,” Istanbul-based independent analyst Yoruk Isik told Al-Monitor. “To imagine any role for Turkey beyond this point would be fantasizing.”

“Things looked rosy with the Turkic world for [the Turkish government] but now they have to deal with Russia. Russia is the clear winner,” Ozcan concurred.

Putin appeared to share that assessment, telling a virtual summit of the CSTO that the body had managed to "prevent the undermining of the foundations of the state, the complete degradation of the internal situation in Kazakhstan and block terrorists, criminals, looters and other criminal elements."

He said, "Of course, we understand the events in Kazakhstan are not the first and far from the last attempt to interfere in the internal affairs of our states from the outside."

Bordering Russia to the north and China to the east, and with a population of 18 million, Kazakhstan is an enormous country the size of Western Europe with vast energy and mineral resources. Turkey is among its key trading partners with the volume of trade between the two countries standing at around $2 billion.

The demonstrations erupted on Jan. 2 in the country’s western oil town of Zhanaozen over the sudden spike in the price of car fuel and rapidly spread to its commercial capital Almaty as they evolved into a show of anger against the massively corrupt Nazarbayev and his oligarch cronies. Alleged pro-Nazarbayev vigilantes responded with force. Over 160 people were killed, including three children, according to Kazakh authorities.

On Jan. 5, Tokayev dismissed Nazarbayev from his role as chair of the security council. He also sacked the head of the security services Karim Masimov, installed by Nazarbayev to keep close watch over him, along with the entire cabinet. Masimov has since been arrested for treason.

At least 8,000 people have been detained since the protests began. Thanking Russia for its intervention, Tokayev claimed today that militants from neighboring Central Asian nations, including Afghanistan, as well as from the Middle East were involved in stoking the unrest without providing any concrete evidence to back his claims. He hasn't mentioned Nazarbayev in any context. Isik reckons that even with all his billions in accumulated wealth, with Russian troops on the ground, Nazarbayev no longer poses a threat. His whereabouts remain unknown.

Tokayev’s comments may have been an indirect swipe at Turkey, long accused by countries like Egypt, Israel and the UAE of sponsoring Muslim extremist groups such as Hamas. Ankara has also been accused of turning a blind eye to the thousands of foreign fighters who crossed from Turkey into Syria to join the Islamic State.

Firdevs Robinson, a London-based analyst and former editor of the BBC’s Central Asia desk, told Al-Monitor that the fact that Turkey took time to respond to developments in Kazakhstan “is indicative of how potentially troublesome this crisis may become for Turkey,” also in terms of how it affects its relations with Russia. The Black Sea neighbors are on opposite sides in the escalating crisis over Ukraine.

Robinson continued, “Turkey has no choice but walk a tightrope in coming days. One can already detect a strong dose of realism, even discomfort in [Turkish] authorities’ statements about where they stand.”

“After years of promoting an Islamic identity among Kazakhs, allowing Kazakh militants free passage to Syria and turning a blind eye to Kazakh mafia elements’ links with the Turkish shadowy nationalists, their unease is understandable,” she concluded.