Turkey has stepped up its charm offensive toward energy-rich Central Asia with traditional archery and horseback fights over a goat's carcass. 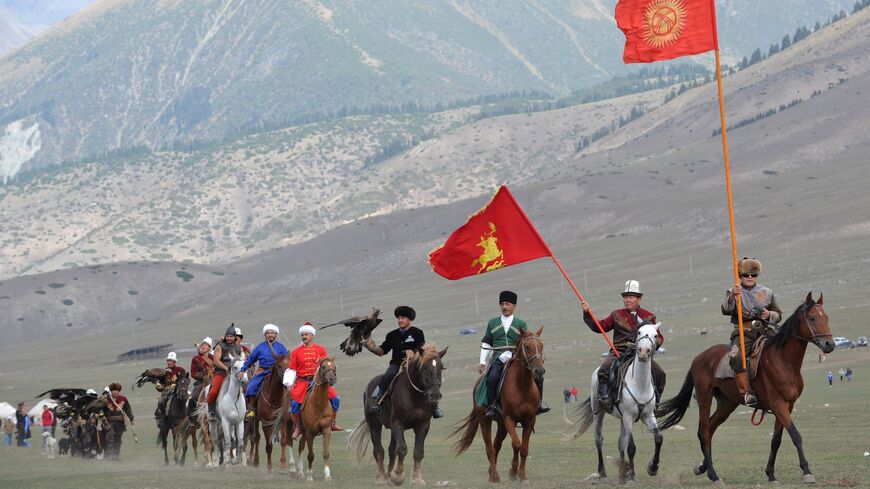 IZNIK — A circular Mongolian tent dominated the center of Iznik, a picturesque town on a lake and surrounded by hills, just a short walk from the small Hagia Sophia church. Iznik, or Nicaea as it is called in Greek, is reportedly named after the wife of Lysimachos, one of the generals of Alexander the Great who captured the city in 300 BC. The old church is the venue of the Ecumenical Council of 325, which established the doctrine of the Holy Trinity. It and the town draw thousands of tourists every year, mostly Greek.

But the city attracted a different crowd Sept. 30-Oct. 2, when it hosted the fourth edition of the World Nomad Games, a competition dedicated to ethnic sports practiced in Central Asia with exotic names such as “kapyshmali aba wrestling” and “Kok Boru.” The former is a blend of judo and traditional wrestling, while the latter is a Kyrgyz game in which players on horseback wearing traditional nomadic clothes and iron helmets try to get past one another with a goat’s carcass, replaced with a dummy in modern-day games. There are also the Kazakh “zhamby atu” (archery on horseback), women’s wrestling (in which the Iranian team took 11 medals) and women’s archery, featuring Turkic amazons wearing headgear of metal and colorful beads. Gastronomy workshops, folkloric dances and children's archery lessons accompany the games, drawing a million visitors to the city in four days.

“We cannot allow the disappearance of nomad culture, which has marked thousands of years of civilization. So we, as Turkey, are proud to host the games that keep this culture alive in various aspects,” said Turkish President Recep Tayyip Erdogan in his keynote speech at the opening of the games on Sept. 29.

Erdogan was flanked by Kyrgyz President Sadir Caparov and Ersin Tatar, the president of the Turkish Republic of Northern Cyprus, which is only recognized by Ankara. Turkey hopes that some Turkic states will recognize it soon.

“I believe that these games, attended by 3,000 athletes from 102 countries, are a unique cooperation platform at a time when our region is scorched by religious and ethnic conflicts, tensions and crises,” the Turkish president said.

Turkey is the first country outside Central Asia to host the World Nomadic Games, whose first three editions took place in the Kyrgyz resort town of Cholpon-Ata. Eager to impress, Turkish organizers — including Erdogan’s controversial son Bilal, who heads the World Ethnosports Confederation — have created a village of 700,000 square meters. The main event area has a 5,000-person capacity and separate arenas for wrestling and archery competitions.

“Hosting sports organizations of this scale is a crucial aspect of soft power,” Sabahattin Devecioglu, a professor of sports economics at Firat University, told Al-Monitor. “I consider the games in Iznik to be significant due to two factors. First, it focuses on intangible heritage worth saving. Second, brings the stage away from big cities such as Istanbul or Ankara and to the smaller and lesser known city of Iznik, which could use a touristic boost.”

The scholar says that the regional dynamics create a conducive atmosphere for the entry of Turkey, which has invested in ties with its Turkic cousins since the dissolution of the Soviet Union. “Central Asia now resembles the 1990s when there was a huge competition between global and regional powers for influence over the resource-rich region,” she told Al-Monitor. “The shadow of Russia on the region, coupled with the desire of the Central Asian states to counterbalance Russia and China, has helped further foster relations between Turkey and the Central Asian states on politics and defense. The relations are fast growing. Kazakhstan and Turkey have enhanced cooperation under Tokayev. The fallout between Turkey and Uzbekistan under  Islam Karimov entered a new era with the new president, Shevket Mirziyoyev.”

Besides Turkey’s soft power, which extends from academic cooperation to Turkish soap operas (though local watchdogs occasionally contest them), Ankara also stepped up its defense cooperation with the Central Asian republics.

Turkmenistan is among Turkey’s top arms buyers. Besides drones and vehicles, Turkey has supplied most of the country’s vessels. Kyrgystan bought Bayraktar TB2 drones from Turkey last year. Its estranged neighbor, Tajikistan, is eager to buy some, which may put Turkey in a dilemma.

Turkey, in an economic bind, is eager to boost its trade ties with the Central Asian states. Turkey’s relations with Kazakhstan, the largest economy among the Central Asia republics, reached $4.1 billion in 2021. Erdogan said he would like to see the figure reach $10 billion. Kyrgyz-Turkish trade almost doubled to $836 million between 2019 and 2021, but Erdogan set the target at $1 billion during a visit last year.

“Given its economic challenges and dependence on external sources for energy, Turkey is eager to enhance its trade opportunities in broader Eurasia,” Bonnenfant said. “Resource-rich Central Asia, particularly Kazakhstan, is an important focus.”

During the Nomad Games in Iznik,  Erdogan met briefly with Yerlan Koshanov, the chair of the lower house of the Kazakh Parliament. The two discussed bilateral ties and Erdogan's upcoming visit to Kazakhstan next week. According to a statement by the Kazakh Parliament press office, Erdogan praised Tokayev’s efforts to implement substantial reforms in the country and his initiative to hold early presidential elections, scheduled for late November.

Koshanov, for his part, expressed hope that Erdogan’s Oct. 12-13 visit would raise relations between the two countries to a new level and “create new opportunities.”

The Turkish president will visit Astana, the Kazakh capital whose name was changed back from Nur-Sultan two weeks ago, to attend the Conference on Interaction and Confidence Building Measures in Asia (CICA). The 27-member organization, which created by  Kazakstan’s late strongman Nursultan Nazarbayev in the 1990s, works to achieve economic and political cooperation between its members from Central Asia and the Middle East.