Diplomats from both countries have refrained from making powerful statements on the situation in the Central Asian country. 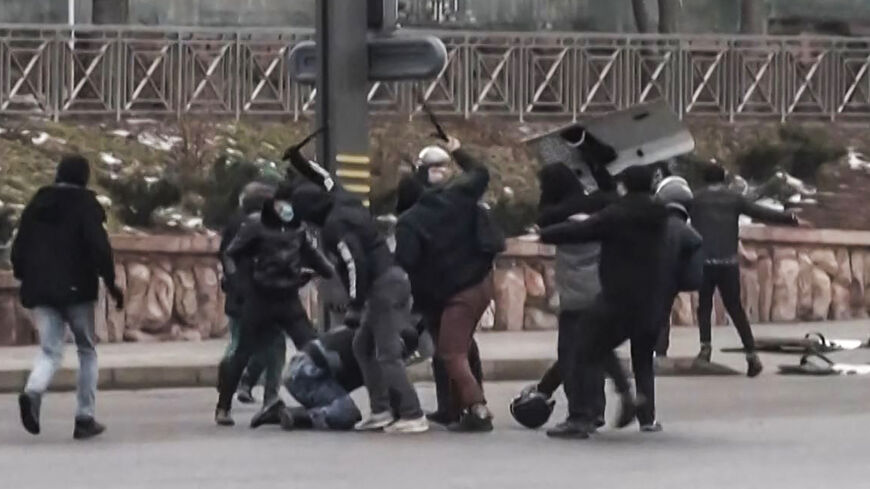 A frame grab taken on Jan. 6, 2022, from an AFPTV video made on Jan. 5, 2022, shows protesters clashing with Kazakstan's security forces during a demonstration in the country largest city, Almaty, as unprecedented unrest in the Central Asian nation spins out of control due to a hike in energy prices. - ALEXANDER PLATONOV/AFPTV/AFP via Getty Images

The governments of Turkey and Iran both reacted to the unrest in Kazakhstan today.

The Central Asian country is currently gripped with massive anti-government protests. Demonstrators have forcibly entered and set fire to government buildings. Security forces have shot at and killed dozens of protesters, and some police have also been killed.

Iran’s Foreign Ministry spokesman Saeed Khatibzadeh called for security and stability in Kazakhstan. He expressed hope that the government and the people solve the issue through “dialogue based on national interests and peaceful ways without foreign interference,” the official Islamic Republic News Agency reported.

Turkish Foreign Minister Mevlut Cavusoglu spoke with his Azerbaijani and Russian counterparts about the situation in Kazakhstan today, the official Anadolu Agency reported. Cavusoglu refrained from commenting on developments in the country himself.

Turkey’s parliament speaker Mustafa Sentop was more frank, offering his best wishes to Kazakhstan. “We believe that the state of Kazakhstan and the brotherly people of Kazakhstan will overcome these difficult days with common sense and will quickly attain peace and stability," Sentop said on Twitter. "Turkey always stands by Kazakhstan.”

Turkey and Kazakhstan have historically had good relations, in part because of a shared Turkic heritage. Late last year, Turkish President Recep Tayyip Erdogan hosted leaders from Kazakhstan, Kyrgyzstan, Uzbekistan and Azerbaijan for a conference. Erdogan hoped to create an alliance of countries that speak Turkic languages.

Relatedly, a number of Gulf airlines canceled flights to Kazakhstan this week due to the situation.