Israeli President Isaac Herzog traveled yesterday to Nicosia, trying to reassure his hosts that recent rapprochement with Ankara won’t come at the expense of the Israeli-Cypriot-Greek alliance. 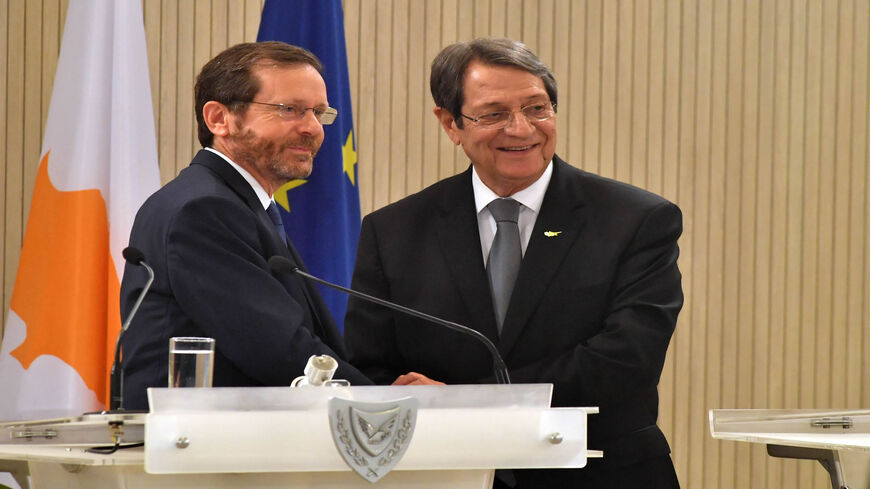 Israel’s President Isaac Herzog traveled yesterday to Nicosia, for a one-day visit. Meeting with his Cypriot counterpart Nicos Anastasiades, Herzog reportedly tried reassuring him over recent attempts by Israel for rapprochement with Turkey, including a trip by Herzog to Ankara scheduled for later this month.

Upon arrival to Nicosia, Herzog tweeted, “Beginning an official visit this morning in Cyprus, our close neighbor, to reaffirm our special relationship. Thank you, President Anastasiades, for your true friendship. Pleased to discuss strategic issues with you. The Israel-Cyprus relationship is an anchor of stability in the Med.”

At their meeting, Herzog told Anastasiades, “Nothing in my visit [to Turkey] and what would ensue will be on the account of this strategic relationship with your country.” Herzog continued that Israel seeks to strengthen its ties and pursue dialogue with all neighboring countries and all faiths, including Turkey that he called “a very important neighbor of ours, which has a huge impact on our lives in many fields. We have to … if possible to lower the tension and move on in a true dialogue that would definitely include issues of climate and the economy,” Herzog noted.

On Feb. 24, Herzog traveled to Athens, in a similar attempt to reassure Greek leadership over attempts to warm up ties with Turkey. Herzog met there with his counterpart Katerina Sakellaropoulou, Greek Prime Minister Kyriakos Mitsotakis and Greek opposition leader and former premier Alexis Tsipras.

Israel, Greece and Cyprus have fostered over the last few years a strong trilateral strategic alliance, focused on both security and energy. In 2019, Cyprus, Greece, Egypt, Israel, Jordan, Italy and the Palestinians agreed in Cairo to create the East Mediterranean Gas Forum, which does not include Turkey. A year later, Israel, Greece and Cyprus signed the EastMed deal, for a pipeline that would transfer natural gas from the eastern Mediterranean to Europe, a project Turkey is objecting. Leaders from Greece and Cyprus visit Israel frequently and vice versa.

Fostered under former Prime Minister Benjamin Netanyahu, Prime Minister Naftali Bennett has been nurturing further the trilateral alliance. Last December, Bennett hosted in Jerusalem his Greek and Cypriot counterparts, showcasing his government’s willingness to continue strengthening ties. "We are expanding our ties in fields of security, economy, technology, tourism. … Our countries are cooperating in air, with our energy projects our countries are cooperating at sea, and here today we can also say that we are cooperating on the ground. This trilateral alliance between Israel, Cyprus and Greece is good for our peoples, good for our countries and good for the region,” Bennett stated on that occasion.

That being said, Israel has been warming up lately to attempts by Ankara over the past two years to rehabilitate bilateral ties. Relations have deteriorated seriously since the 2010 Mavi Marmara flotilla to the Gaza Strip, where nine Turkish nationals were killed by Israel Defense Forces' fire. Over the years, Turkish President Recep Tayyip Erdogan did not hide his animosity toward Israel and even made remarks bordering on antisemitism. Turkey expelled Israel’s ambassador to the country in 2018, forcing Israel to react with a similar move. Thus, Erdogan’s change of attitude was first met with suspicion and cold shoulder by Jerusalem. Now, however, it seems, Jerusalem is willing to give Ankara a chance at bettering the relations.

Herzog has been championing this willingness, after Erdogan called him on several occasions. The Turkish president called his Israeli counterpart to congratulate him for his nomination as president last year. Erdogan also called Herzog to express his condolences over the passing away of the president’s mother. In turn, Herzog called Erdogan to wish him a speedy recovery after contracting the coronavirus. Herzog’s expected visit to Ankara mid-March would be a first high-level Israeli visit to the country in years.

While Herzog was ending his visit in Cyprus, his office issued a statement saying that a senior Israeli delegation was currently in Ankara, on a two-day visit. According to the statement, the Israeli delegation included Israel’s Charge d'Affaires in Ankara Irit Lillian, the president’s diplomatic adviser Shirley Heller, his spokesperson Naor Yahya and other Israeli representatives. In meetings held at the Turkish president’s palace and with the Turkish Foreign Ministry, the parties reportedly discussed preparations for Herzog’s visit to Turkey.

On Feb. 17, a senior Turkish delegation visited Israel for the same purpose. Ibrahim Kalin, spokesperson and senior adviser to the Turkish president, and Deputy Foreign Minister Sadat Onal met on that occasion with Director General of Israel’s Foreign Ministry Alon Ushpiz and with senior associates of Herzog. Ushpiz had already visited Ankara in January, to prepare the ground. Evidently, and even though the president is a symbolic — not political — function in Israel, the Foreign Ministry is taking the expected Ankara visit very seriously, and with quite a lot of expectations.