US ambassador to Israel lobbies in favor of settlers

US Ambassador to Israel David Friedman acts more like an ambassador of the settlers vis-a-vis the Trump administration. 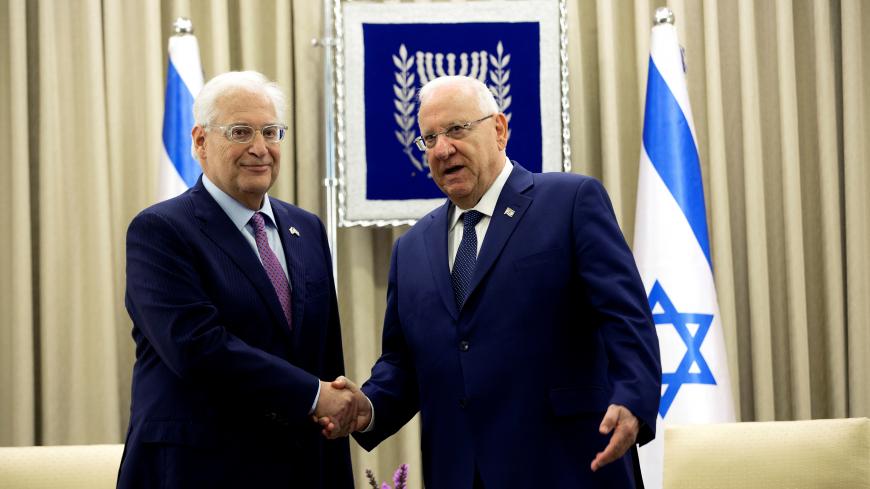 US Ambassador David Friedman (L) shakes hands with Israeli President Reuven Rivlin during a ceremony at his residence in which Rivlin received Friedman's diplomatic credentials, Jerusalem, May 16, 2017. - REUTERS/Heidi Levine

The pro-settlement Israeli right does not appear overly concerned by the prospect that Prime Minister Benjamin Netanyahu may have to relocate from his office to a jail cell, following police investigations against him. Nor are these occupation deniers losing sleep over an Israeli-Palestinian peace plan being cooked up by President Donald Trump that would disrupt their plans to annex East Jerusalem and West Bank lands to Israel. They have placed their trust elsewhere, and it’s not in the Almighty. As long as David Friedman occupies the office of the US ambassador in Tel Aviv — soon to be in Jerusalem — they need not worry. Since Trump’s former attorney was given the plum diplomatic assignment, the platform of the pro-settlement HaBayit HaYehudi party has become White House policy.

In his role as the president’s gatekeeper to the Israeli arena, Friedman has taken it upon himself to ensure that White House senior adviser Jared Kushner and Middle East envoy Jason Greenblatt do not take seriously the boss’s talk of achieving the “ultimate deal” between Israelis and Palestinians. For Friedman, a bankruptcy lawyer, the Arabs went bankrupt in 1967. Moreover, as far as he is concerned, anyone who goes bankrupt should be grateful for any offer that keeps him from being thrown out into the street. Friedman has become the scourge of the State Department and National Security Council. A US official who attends meetings of the US peace team told Al-Monitor that when Friedman is in the room, Greenblatt aligns to the right, but when Friedman is absent from the forum, Greenblatt allows himself to present balanced and logical views.

In the discussions over moving the US Embassy from Tel Aviv to Jerusalem, Friedman trumped the Middle East affairs professionals at the State Department and defense agencies. These professionals objected to moving up the date of the move, as they did to Trump’s Dec. 6 declaration recognizing Jerusalem as Israel’s capital. These senior officials warned that such a move at this time would embarrass Palestinian President Mahmoud Abbas and distance him further from the negotiating table. Friedman also vanquished Secretary of State Rex Tillerson, who demanded in September that Israel give back $75 million in US aid that Congress approved during the Barack Obama administration.

These days, State Department officials are running a rearguard battle against Friedman’s pressure to erase the term “occupied territories” from official American documents and reports, chief among them the annual human rights report, when referring to the lands Israel took over in the 1967 Arab-Israeli war. Obviously, Friedman — a Jew who served for years as chair of Friends of the Beit El settlement — believes that Beit El is part of the Jewish State. In July he invited the heads of the West Bank settlement movement, known for opposing a two-state solution to the Israeli-Palestinian conflict, to the annual July 4 embassy party. Representatives of Israeli peace organizations were not accorded a similar courtesy, given that Friedman views members of such liberal groups as J Street and others that favor the establishment of a Palestinian state alongside Israel as “worse than kapos," the Jews who were forced to help the Nazis during the Holocaust.

Not surprisingly, on Feb. 19 Friedman reportedly told heads of the President’s Conference of Major Jewish American Organizations visiting Israel, “For 25 years people have said that the situation cannot continue, but what happened in those years? Israel has only grown and developed.” In response to the reported remarks on Channel 10 television news, the US Embassy issued a statement saying, “The ambassador believes that unrestrained settlement growth is not helpful for peace." It is unclear where the ambassador draws the line between restrained and unrestrained settlement expansion.

Either way, Israel is conducting an unrestrained expansion of its de facto annexation of the territories right under the ambassador’s nose. The US administration, and probably the US Embassy in Israel, has taken the Fifth. Documents and legal opinions obtained by the Peace Now movement, with the help of the Movement for Freedom of Information, among others, indicate that Attorney General Avichai Mandelblit and Justice Minister Ayelet Shaked are laying the legal administrative groundwork to erase Israel’s 1967 borders.

A Peace Now report claims Shaked and Mandelblit have allowed expropriation of Palestinian land if done in “good faith” or if designed to pave access roads to Israeli settlements. Peace Now also says the two have approved the use of abandoned Palestinian structures and property owned by absentee Palestinian landlords by Israeli settlements. Their decisions have also allowed the expropriation without judicial review of land granted to the Hebron municipality as a protected tenant, and their directives mandate that all government-sponsored legislation proposals address the possibility of the legislation also being applied to the occupied territories, too. The law has also been amended to facilitate the demolition of homes and eviction of Palestinian communities in Area C of the West Bank, which is under full Israeli control.

Thus, even as officials in Washington are busy putting together the “ultimate deal” of Israeli-Palestinian peace, officials in Jerusalem are busy undermining it; the US Embassy is biting its tongue and the State Department is grinding its teeth. Who remembers that at his confirmation hearing last year, Friedman promised members of the Senate Foreign Relations Committee that he would not support the annexation of Palestinian territory to Israel and declared that the two-state solution “still remains the best possibility of peace in the region”?

This is not the first time that advocates of Israel’s right-wing governments have held key positions in US administrations, Republican and Democratic alike. Suffice it to mention Dennis Ross, who headed the Middle East peace teams under presidents George H.W. Bush and Bill Clinton, ambassadors Martin Indyk and Dan Shapiro, and Secretary of State Condoleezza Rice. However, never has an adherent of such a tiny messianic minority held such a strong position on the verge of such a deep abyss.

Five former US ambassadors to Israel warned the Senate Foreign Relations Committee at the time against Friedman’s appointment. A campaign mounted by J Street against the Senate confirmation argued that Friedman’s nomination was “reckless, putting America’s reputation in the region and credibility around the world at risk.” Little did they know.