For Israeli settlers, US President-elect Donald Trump’s choice of David Friedman as the next US ambassador to Israel is nothing short of a miracle. 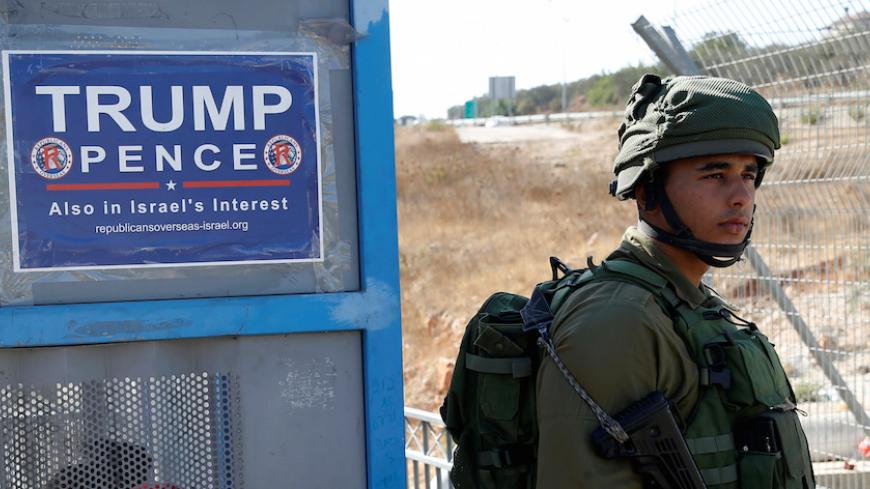 An Israeli soldier stands next to a bus stop covered with a poster from the Israeli branch of the US Republican Party campaign in favor of Donald Trump, near the West Bank Jewish settlement of Ariel, Oct. 6, 2016. - REUTERS/Baz Ratner

The appointment of attorney David Friedman as US ambassador to Israel was the first actual indication on the part of the Donald Trump administration that it does intend to support the Israeli right and the settlements. If until now there were only assessments and background noise, a smattering of statements and a certain vague ambiguity, Friedman’s appointment sends a very clear, public signal that is quite remarkable. For the first time, the United States is sending an ambassador to Israel who openly supports the settlements, personally contributes to their development, calls on Israel to increase settlement construction and suggests that Israel annex at least some of the land with settlements on it.

There are no words to describe such a sharp change in direction, or how dramatic its impact could be, if Trump does not change course and dictate a very different policy to Friedman. For Trump to do so would come as quite a surprise. As one senior State Department official told Al-Monitor on condition of anonymity, “In American terms, it's like John Lennon being replaced by Donald Rumsfeld.”

Knesset member and Meretz leader Zehava Gal-On responded to the appointment by telling Al-Monitor that she is considering refusing to meet with Friedman, to avoid giving him legitimacy. The problem is that Gal-On will have to worry about her own legitimacy once Friedman takes office. Main opposition leader Isaac Herzog was more circumspect, saying that he makes a habit of not intervening in appointments made by US administrations.

As of Dec. 18, thousands of settlers were gathering at the unauthorized Amona outpost, which is slated to be evacuated Dec. 25. For many months now, all of Israel has been in an uproar as a tumultuous debate raged over its evacuation, by order of a Supreme Court injunction, because the outpost was built on private Palestinian land. Prime Minister Benjamin Netanyahu was torn between complying with the order and his desire to keep his right-wing base loyal to him. The evacuation is scheduled for days during which President Barack Obama is possibly deliberating a bold diplomatic move to end his last term in office. Netanyahu hopes that images of the evacuation of an Israeli settlement will pacify Obama and “help” him decide that there is no reason for him to take action during his final days in the White House.

It is incredible, when one considers it, but if Amona’s evacuation had been scheduled to take place after Jan. 20, there is a good chance that Friedman, as ambassador, would have protested it vigorously. The prime minister’s office in Jerusalem is used to seeing or hearing US Ambassador Dan Shapiro respond to every tender for construction in the territories with a vehement protest. It is therefore thrilled to accept this change of direction.

“It looks too good to be true,” one senior Netanyahu staffer told Al-Monitor on condition of anonymity. “We finally got the president of our dreams and an ambassador who could easily integrate into the right-wing flank of the Likud’s Knesset list.”

The US State Department has a map that experts have been working on for a generation. All information accumulated over decades of keeping meticulous tabs on the region can be found on this map. It is updated constantly based on firsthand observations, satellite imagery, patrols, intelligence and publications accessible to the public. It is a map of Jewish settlements in Judea and Samaria, land commonly referred to as the West Bank, which the international community considers occupied. This map has been shown to quite a few Israelis over the past few weeks alone. Senior government officials in Jerusalem are familiar with it, because Shapiro and other senior American officials show it to them regularly. The map also includes all of the unauthorized outposts, accompanied by detailed statistical tables, flowcharts, population figures and various geographic divisions.

The bottom line on this map is simple. Ever since Netanyahu came to power, Israel has been making an enormous effort to scatter as many outposts as possible along the central mountain ridge running the length of the West Bank, north to south. It wants to insert as many wedges as it can into Palestinian-controlled territory in order to make a two-state solution infeasible. According to the Americans’ statistics, when Netanyahu came to power in 2009, there were 60,000 Israeli settlers living beyond the separation fence outside the settlement clusters. Today, almost 90,000 settlers live there.

What will an Ambassador Friedman do with this map? We will probably know after Jan. 20. Friedman has been Trump’s real estate attorney for the past 15 years and his adviser for Israeli affairs. He is also a true friend of Israel’s settlement enterprise in the West Bank, whereas all American administrations until now have considered it illegal, illegitimate and a hindrance to achieving a two-state solution.

Friedman considers the Jewish lobby J Street, identified with the American left, as being “worse than kapos [World War II concentration camp prisoners who supervised other prisoners].” Although every comment he makes about J Street sends a shock through the majority of the American Jewish community, Friedman refuses to let up.

Friedman also serves in the United States as president of Friends of Bet El — as in Beit El, the settlement. His closest friend in Israel is the head of the international Friends of Bet El, former Knesset member Yaakov Katz of the National Union Party, who holds some very extreme views. He regards Netanyahu and HaBayit HaYehudi leader Naftali Bennett leftists, supports Israel’s immediate annexation of all of Judea and Samaria and advocates doubling the pace of Jewish construction in the occupied territories.

One source close to both men told Al-Monitor on condition of anonymity, “Friedman has been Katz’s soulmate for over 20 years now. They share a common language, they spend a lot of time together, and their views are similar.” The annual dinner to raise money for Friends of Bet El in the United States took place Dec. 4. Both Katz and Friedman participated in it, as they do every year.

Over the years, Friedman has donated large amounts of money, estimated in the many millions of dollars, to Beit El through the Friends of Bet El. “President-elect Trump’s son-in-law, Jared Kushner, also donated quite a bit of money to this settlement,” a source in the settlement movement told Al-Monitor this week on condition of anonymity. On Dec. 18, Katz told Galei Israel radio that several years ago, Trump himself sent a check for $10,000 to a dinner for Beit El, at which Friedman was the guest of honor.

All these donations had until now been private, personal and voluntary. The question is what Trump will do once he enters the White House. Will he align himself with the most extreme elements of the right in Israeli politics, or will he position himself in the center and bring his representative, Friedman, toward the center too?

One thing is certain. As far as the settlers are concerned, this is, at the moment, a miracle. In fact, it is the kind of miracle that happens only once in a generation. The settlers are convinced that Trump and his ambassador were sent to them by divine providence and that redemption is on the way.