Some are convinced that Israel's right-wing government and the new US administration under Donald Trump offer a once-in-a-lifetime opportunity to legalize all West Bank settlements. 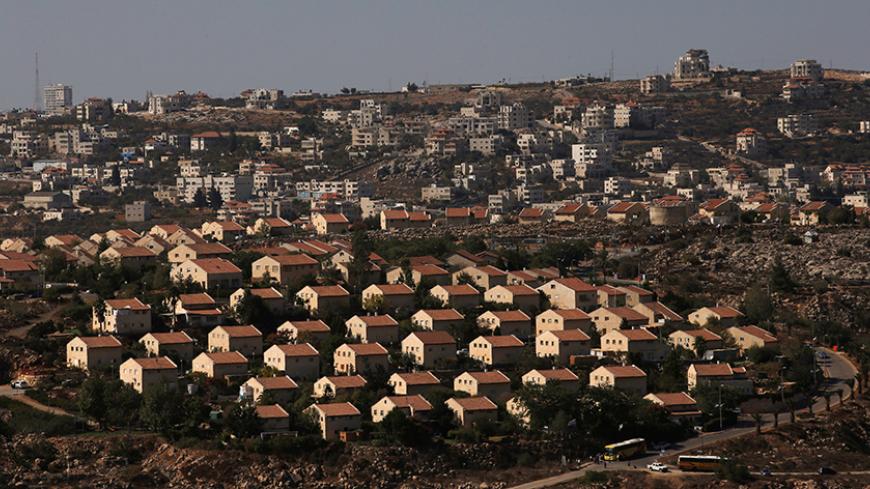 "We did say 'thank God,' but no one here popped open the champagne on Monday night," settlement strategist Yehoshua Mor Yosef told Al-Monitor in response to the Knesset's passing the Regularization Law on Feb. 6.

The contentious law, advanced by HaBayit HaYehudi, is intended to legalize Jewish homes built on privately owned Palestinian land in the West Bank. Mor Yosef says that as far as the settlers are concerned, this is only the beginning. In the next stage, the fight will move to the Supreme Court. "At that point, HaBayit HaYehudi and its leader Naftali Bennett will have to fight for the law, based on the fairly safe assumption that the Supreme Court will overturn it," he said. "Ultimately, what matters to us is the outcome. We have no intention of allowing Bennett to hide behind the Supreme Court."

Mor Yosef runs the political and media campaign to legalize nine houses in the settlement of Ofra that were built on privately owned Palestinian land and are slated for demolition, according to a Supreme Court ruling. His campaign's aggressive, intimidating messages target the leaders of HaBayit HaYehudi, calling on them and their party to deliver. After all, the settlers believe that the circumstances are more favorable now than they have been in a very long time. An obviously right-wing government rules Israel, while the Donald Trump administration in the United States appears to support the settler enterprise.

"Here in Ofra, we are no longer willing to be considered criminals. We are fed up with being suspects, and we will not give up on the legalization of our homes. We won’t be persuaded otherwise. This time we will not accept the excuse that the Supreme Court issued a ruling. Our politicians cannot hide behind the Supreme Court anymore," said Mor Yosef as he outlined his campaign strategy and its implicit threat.

According to Mor Yosef, "The right doesn't believe [Prime Minister Benjamin] Netanyahu, and I personally don’t believe him either when he says that he received messages from the White House that he must coordinate with them first. Based on what we've seen until now, Trump is fulfilling his campaign promises. Netanyahu has a problem, because he can't hide behind [former President Barack] Obama anymore. Right now, I am convinced that not only will the homes be legalized, but Maale Adumim will be annexed as well, because if that doesn’t happen, the government will collapse."

"The operation was a success, but the patient is still in critical condition," said Moshe Saville, deputy head of the Gush Etzion Regional Council, in response to the Regularization Law. He went on in a statement, "The law provides only a partial answer to the wrongs and injustice faced by the residents of Judea and Samaria. … Only the annexation of all the settlements will send a clear message that we are here to stay for all eternity and correct the current situation."

The determined, confident and threatening tone shared by Saville and Mor Yosef is an expression of the mood in the settlements ever since Trump was elected and their belief that they face a once-in-a-lifetime opportunity to establish realities on the ground, their golden age. That is why they are applying massive pressure on politicians on the right. Until now, those politicians could always blame a US administration that would not tolerate construction in the settlements. They can't pass the buck anymore.

The same sense of euphoria has been felt in the settlement of Beit El ever since Trump was elected and the settlers learned of the appointment of David Friedman as the new US ambassador to Israel. Friedman has close ties to the settlers. He is the chairman of American Friends of Beit El and owns a home in Jerusalem's Talbieh neighborhood.

"The feeling here is that we just experienced a miracle," Hagai Ben-Artzi told Al-Monitor. Ben-Artzi, who lives in Beit El, is also the prime minister's brother-in-law. "It is important to understand that the continuation of the Obama administration's policies under Hillary Clinton would have been bad news for us. Clinton took a hard line against construction in Judea and Samaria. She was surrounded by leftist, anti-Semitic Jewish advisers. It would have been a very hard time for us. There was this fear hovering over us that to mark the 50th anniversary of the 1967 Six-Day War, Israel would be forced to make a [diplomatic] move. Then it all slipped out of [Palestinians'] hands. Now it is quite possible that everything will be turned around, and we will annex the land instead."

Like most of the settlers, Ben-Artzi chooses to ignore reservations expressed by the Trump administration over the Israeli government's statements about construction in Judea and Samaria to compensate the settlers for the removal of Amona. "Anyone looking at the whole picture can see a few basic facts that ensure that the settlements will fare better under Trump," said Ben-Artzi. "It's an incredible turnabout, especially after [former Secretary of State] John Kerry, who was a huge anti-Semite. It's a miracle. Still, in the end, it all depends on us. The Americans will not do the job for us. At best they'll be open and tolerant of all of our bold moves."

Ben-Artzi doesn't hold out much hope that his brother-in-law will save the day. "I don’t think Netanyahu will do anything to help us when facing the Supreme Court. As far as I am concerned, he is a nuisance here, because he is terrified of the Supreme Court, or maybe because he has his own legal problems with the champagne [scandal] and the whole slew of abominations. Maybe that's why he doesn't want to take on the legal system."

Like so many of the settlers, Ben-Artzi does hang his hopes on Bennett and HaBayit HaYehudi. He brought up a bill to be submitted this week by Knesset member Bezalel Smotrich meant to enable the Knesset to re-enact laws previously struck down by the Supreme Court. The settlers are now demanding that HaBayit HaYehudi bring this bill to legislation to prevent the Supreme Court from killing the Regularization Law.

"This will be Bennett's next test, when he confronts the wicked dictatorship of the Supreme Court. If that does not happen, they will have to quit the government. If, however, they do stay, I believe that they will be wiped out on the right. No one will vote for them. I imagine they realize that." Ben-Artzi went on, "If this government is incapable of passing the Regularization Law [again] in the face of Supreme Court opposition, it should be taken down. Whatever happens, happens. God is great. It seems to me that everybody here feels the same way."