The Israeli right is apprehensive about President Donald Trump's upcoming visit as he continues to proclaim his determination to make a deal ending the Israeli-Palestinian conflict. 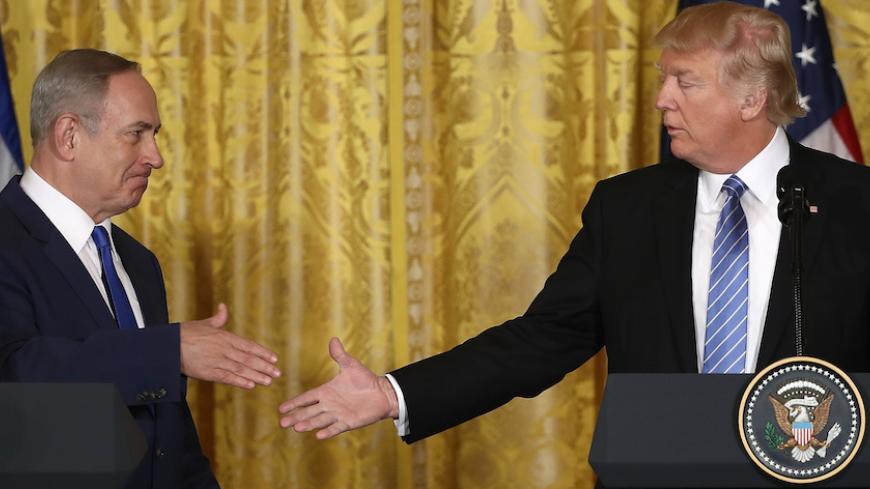 “I flew back from the US this morning and came away with the impression that the president is determined to jumpstart an active diplomatic process in the Middle East for peace between Israelis and Palestinians," Zionist camp member and opposition leader Isaac Herzog told his faction’s meeting in the Knesset on the morning of May 8.

Herzog said that Prime Minister Benjamin Netanyahu "will be forced to decide between the historic national exigency and his own narrow interests.” His remarks joined the growing indications in recent weeks that President Donald Trump is preparing a major “surprise” ahead of his May 22 visit to Israel. Herzog, who flew to New York to attend the annual Jerusalem Post conference, got the distinct impression from conversations with administration officials that not only is Trump determined and enthusiastic about sponsoring renewed negotiations on an Israeli-Palestinian agreement, but a concrete move is taking shape behind the scenes.

Trump’s impending visit to the region is naturally sending the Israeli political system into a tailspin. Unlike the vague and contradictory hints at the start of his term, there’s no mistaking the messages being conveyed by Trump and those around him regarding his intentions. Trump is interested in achieving a “deal” between Israelis and Palestinians, but the nature of what he has in mind is still unclear, and no one knows whether the American president will present any details during his upcoming visit.

What is clear is that less than six months after taking office, Trump is not the messiah of Israeli settlers, and the Israeli right is following his moves with grave concern and suspicion. Contrary to Trump’s campaign promises and declarations at the start of his presidency, the ambassador he appointed, David Friedman, will be working out of the US Embassy in Tel Aviv, which will not be moving to Jerusalem. Since entering the White House, Trump has also spoken out several times against construction in the Israeli settlements.

To understand the extent of the right-wing’s confusion and disappointment with the Trump administration, recall the whoops of joy that resonated through the Israeli settlements with the election of the new Republican president and the wide anticipation that Friedman, a pro-settler American Jew, would be a dream come true.

"The feeling here is that we just experienced a miracle," Hagai Ben-Artzi told Al-Monitor in February. Ben-Artzi, who lives in the settlement of Beit El, is also the prime minister's brother-in-law. "It is important to understand that the continuation of the Obama administration's policies under Hillary Clinton would have been bad news for us.”

In contrast to the premature outburst of joy on the right, the Israeli left felt it had been dealt a hard blow by the November elections. Left-wing Meretz' chair Zehava Gal-On attacked Friedman and proposed in an interview that he “go look for his friends in the settlements.” Her outspoken reaction reflected a sense of foreboding within the left that its guiding vision — two states for two peoples — was gradually becoming unrealistic.

But in recent weeks, the tables have turned, especially after the successful visit by Palestinian President Mahmoud Abbas to the White House on May 3. Senior Likud members talk of trepidation in Netanyahu’s office at the prospect that while in Israel Trump will surprise the prime minister with a concrete plan to revive the peace process.

Trump’s special Middle East envoy, Jason Greenblatt, also a yarmulke-wearing American Jew, told diplomats in Brussels May 4, “As Trump told Netanyahu, he also told President Abbas that he must be willing to make the compromises we all know are necessary if we want to achieve peace which the public on both sides can trust and own.”

In recent months, Greenblatt has strengthened his ties with Israel's former foreign minister and Herzog’s political partner Tzipi Livni, one of the figures most identified in Israel with the two-state solution. In a May 12 interview with Haaretz, Livni confirmed that she had met Greenblatt in the United States and made no secret of her enthusiasm.

“We have a huge opportunity,” she said. “The president is talking about his determination to close a deal; that is, to end the conflict. We have a president who thinks big and addresses the hard core. He’s not beating around the bush. I certainly think something dramatic could happen.”

Livni, who conducted negotiations with the Palestinians (without concrete results) both as a minister in the government of former Prime Minister Ehud Olmert and in the third Netanyahu government, probably heard from Greenblatt about a significant move underway. Otherwise, it’s hard to believe she would have spoken so enthusiastically about Trump. In a matter of weeks, the new American president has turned from the hero of the Israeli right into the hope of the Israeli left.

Addressing the conference May 7, Herzog said, "We know what Trump wants. What Netanyahu wants, no one knows. … If he wants peace, he will enjoy political support even from my camp.” The political implication is clear: If the White House puts forth a concrete plan, Netanyahu will come under increased pressure from the right. According to Herzog, the center-left will offer the prime minister a political safety net for any diplomatic move, to prevent him from being able to claim that he will be ousted from power if he pushes ahead with a diplomatic initiative.

A key figure in this interesting puzzle is HaBayit HaYehudi's chair, Education Minister Naftali Bennett. In an interview with Ben Caspit for Al-Monitor last week, he criticized what he called the inaction of the Netanyahu-led Israeli government, claiming it took no immediate action to strengthen its settlement policy when Trump took office. Bennett and his party have presented an organized and consistent front compared with Trump’s fitful behavior. Bennett and Justice Minister Ayelet Shaked have been working creatively to establish facts on the ground in the settlements. For example, Shaked helped push through the regularization bill, legalizing the construction of settlement homes on private Palestinian land, and is now promoting an initiative with Tourism Minister Yariv Levin to apply any law adopted by the Knesset ministerial committee on legislation to Israeli settlers in the West Bank. The effect of the initiative would be differentiation between the Palestinians and Jews living in the West Bank — apartheid.

As he has been doing since he returned to the prime minister’s office in 2009, the year he gave his landmark Bar-Ilan speech declaring support for the idea of two states, Netanyahu will try to navigate the various pressures that will be brought to bear. He will display willingness to conduct negotiations, as he has done in recent days, as well as try to stall. A critical unknown in this situation is how impatient Trump will be in the face of such stalling. If Netanyahu knew the answer, he would be far more relaxed.