The Israeli right-wing camp suspects that Prime Minister Benjamin Netanyahu has already closed a deal with President Donald Trump over talks with the Palestinians. 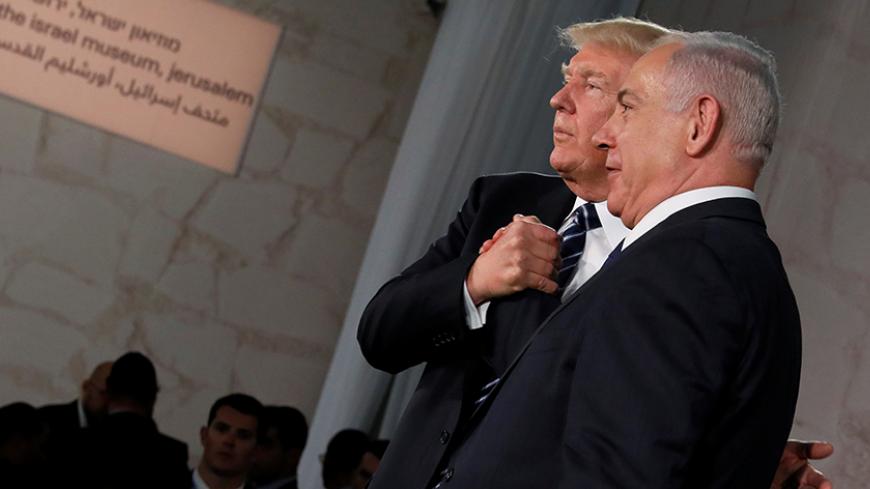 There’s talk on the Israeli political right of a “done deal” between Prime Minister Benjamin Netanyahu and US President Donald Trump. According to senior members of the HaBayit HaYehudi party, one of Netanyahu’s main coalition partners, the deal has been clinched. Netanyahu realized that he has no choice but to go along with the president’s grand quest for Israeli-Palestinian peace, or at least to play along and hope that the Palestinians are the ones who derail it.

To that end, the prime minister will have to change the makeup of his coalition. The current government, the most right-wing government in Israeli history, will not survive a significant diplomatic process entailing difficult concessions on Israel’s part. In recent days, the heads of HaBayit HaYehudi, Education Minister Naftali Bennett and Justice Minister Ayelet Shaked, have begun preparations for the day they are forced to pull out of the government and cross over to the opposition benches.

The question is whether the center-left Zionist Camp can cross from the opposition to replace HaBayit HaYehudi in the coalition after the endless failed negotiations conducted since 2015 by Zionist Camp leader Isaac Herzog on joining Netanyahu’s government. The Labor Party, the main component of the Zionist Camp, will hold primaries in July. “The answer,” a senior party source told Al-Monitor on condition of anonymity, “will be provided by the primaries. If Herzog is re-elected, his path to the government will be short and smooth. If, on the other hand, Knesset member Amir Peretz ousts him, things will be far more complicated.”

The other contenders, such as Knesset member Erel Margalit and former Netanyahu government minister Avi Gabai, have categorically ruled out joining the Netanyahu government. They all talk of providing “external support” for the government if it embarks on peace talks. This means serving as a safety net for Netanyahu by voting from outside of the coalition against any nonconfidence Knesset motion aimed at toppling the government. But Netanyahu is unlikely to base his political future on such support, which has no substantive meaning. This is where Trump comes in. “Trump is the only one who can demand that the Zionist Camp join the government and enforce his demand,” said a Labor Party source, speaking on the condition of anonymity. “It was fear of Trump that made Netanyahu and [Palestinian President Mahmoud] Abbas aspire for peace, and fear of Trump is what should drag Labor into the government.”

On May 27, some 15,000 left-wing Israelis held a rally at Tel Aviv’s Rabin Square to demand a resumption of the Israeli-Palestinian peace process and adoption of the two-state solution. Herzog was the keynote speaker, followed by a surprise message from Abbas to the demonstrators: “Our hand is extended in peace that is created between those who are brave.”

A day earlier, Channel 2 television reported on a poll indicating that Netanyahu and the right had picked up significant political mileage from Trump’s visit to Israel last week. Nonetheless, the poll also included an amazing and significant finding according to which 47% of Israelis still support the two-state solution. After eight consecutive years of Netanyahu rule, the number of Israelis who favor this solution is significantly greater than the number who reject it (39%). The only possible interpretation of these findings is that Israelis would be willing to buy into such an arrangement if it were adopted by someone from the political right. Right now, that someone is Netanyahu. In the dilemma between clashing head-on with Trump or embarking on a diplomatic process with the Palestinians, Netanyahu is highly likely to opt for the latter.

A popular conspiracy theory making the rounds on the right has it that the deal between Netanyahu and Trump has been finalized. All that remains is to place its ingredients in a pot and start cooking. Zero hour is supposed to occur after the Labor Party primaries in July. Netanyahu is supposed to push through his Cabinet controversial measures, such as handing over some West Bank territory that is now wholly under Israeli control (known as Area C) to Area B, administered by the Palestinian Authority under Israeli security control. This move, along with a declaration by Netanyahu of the resumption of talks with the Palestinians on a two-state solution, is expected to result in Bennett pulling out of the coalition. When he does, the Zionist Camp will immediately take his party’s place, based on an arrangement worked out during various negotiations between the sides in the past (as reported extensively by Al-Monitor). Knesset member Tzipi Livni, Herzog’s partner at the helm of the Zionist Camp, will be named justice minister and tasked with responsibility for the negotiations with the Palestinians. Herzog will be appointed foreign minister, and other senior members of his party will be given enticing ministerial positions.

Is Netanyahu really capable of swerving to the left in Trump’s wake? His main problem will be with his own Likud party. A long list of senior party members, such as ministers Yariv Levin, Ze’ev Elkin and perhaps even Israel Katz, could stand in his way. Unlike the prime minister, most Likud ministers and Knesset members oppose a two-state solution, even as a hollow figure of speech. Will Netanyahu succeed in bringing them to heel and forcing a diplomatic process on them after he successfully buried that exact same process as proposed by former President Barack Obama? Netanyahu is deemed capable of such a maneuver. The police investigations piling up against him and a recommendation to prosecute him expected soon could also encourage him to embark on a diplomatic road. He might want to follow the example of late Prime Minister Ariel Sharon, who proceeded with the controversial 2005 Israeli pullout from Gaza even as he was mired in police investigations.

Another option under discussion is for Livni and her Knesset faction Hatnua Party (the smaller partner within Zionist Camp) to join the Netanyahu government, perhaps very soon, before Labor does. Anyone listening to Livni’s rhetoric in recent weeks understands that something is brewing. The anger, deadly criticism and derogatory remarks against Netanyahu have all but disappeared. She talks about Netanyahu with a measure of respect and focuses on her agenda: the diplomatic process. When asked, Livni said there’s nothing going on in the diplomatic arena. If anything comes up in the future, she will react.

The question is one of chronology. When Livni says “in the future,” is she referring to several weeks or years? Given the pace at which special Trump envoy Jason Greenblatt is moving, the future is very near. Greenblatt returned to the region on May 25, some 48 hours after Trump left Israel, and conducted a round of meetings here. According to sources close to the negotiations, the involvement of the US administration through Greenblatt is what brought about the speedy and quiet conclusion of the hunger strike by Palestinian inmates in Israeli jails on May 26. As of now, on the Israeli-Palestinian front, everyone is marching to Trump’s drum beat.