The Israeli government's response in the Amona settlement dispute shows that the settlers have won, setting a clear path for future settlement battles. 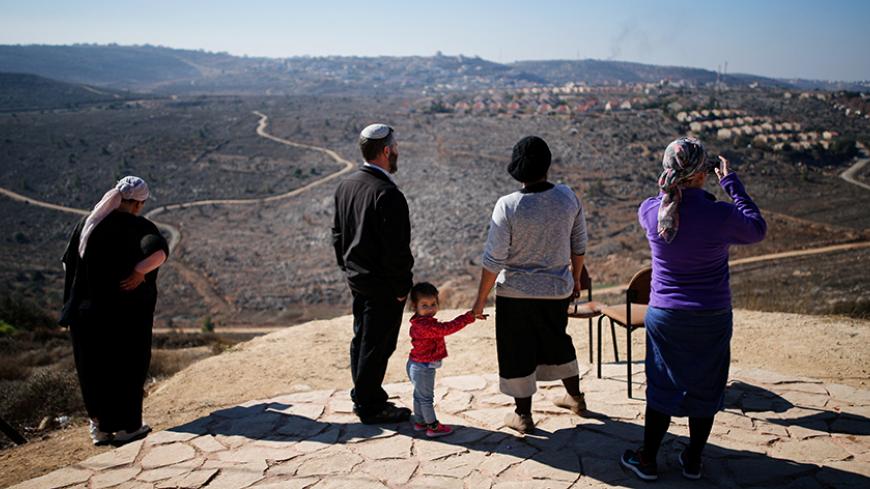 It was my first visit to Amona, although not my first one to a West Bank outpost. They all look pretty much the same. The road to these officially unsanctioned outposts usually goes through a large settlement. Therefore, in local speak, the outposts are simply “add-ons” to the “main settlement.” Every large settlement has an unauthorized add-on. The settlement of Itamar, for example, has Har Gideon and Givat Arnon. Elon Moreh has Havat Skali. Yitzhar has Mitzpe Yitzhar and Givat Tkuma. The list goes on and on. All in all, there are some 120 unsanctioned settlements to which successive Israeli governments have turned a blind eye or given an approving wink and nod. All this holds true for Amona.

The road to the outpost that has stirred up a major political and diplomatic storm goes through the older and larger settlement of Ofra. A small, handwritten sign points toward an adjacent hill. After leaving the settlement, one drives along a narrow road only recently paved or upgraded. The road is strewn with dozens of tires dispersed by young, radical, right-wing Israelis known as “hilltop youth,” ready to be ignited if the government tries to carry out a forced eviction of the outpost.

For now, a deal has been struck for the 40 families at the outpost to leave in return for significant financial compensation and a promise that a replacement settlement will be built for them elsewhere. Most of the hilltop youth are going home, but a few dozen remain seated on knapsacks and rolled up sleeping bags next to the Ofra bus station, promising to return at short notice if the threat of “destruction,” as they call the court-ordered outpost evacuation, is renewed.

Eli, a resident of the settlement of Kdumim who asked that his full name not be used, told Al-Monitor that the night before, on Dec. 19, all the “volunteers” held a farewell party to celebrate their success, which is how they described the compromise with the government. “There was dancing throughout the night till daybreak,” he said. “It warms the heart and soul to see everyone, the best and brightest, mobilizing with such love for a sacred cause, for the people of Israel.”

As far as these supporters of a Greater Land of Israel are concerned, they proved to the world that any evacuation from the Land of Israel, even from a small outpost of 40 families, would not go down well. They are right. The State of Israel, led by Prime Minister Benjamin Netanyahu, gave in to their demands. Suffice it to see the sycophantic video in which Netanyahu implores them to respect the law and declares that his government is committed to the settlements.

Netanyahu worked day and night trying to appease the 40 families and avert their forced eviction. The Amona battle headquarters responded to Netanyahu’s imploring message by stating, “We’re not looking for sympathy or condolences. ‘When I want something I get it,’ you said, and you proved it too. It is in your power to prevent the desecration and save Amona. But if, God forbid, you fail, we will stand here with thousands of others and lead a non\violent, democratic grassroots protest.”

I asked Ariel, a youth from the settlement of Beit El sitting at the bus station, “When you say ‘democratic and nonviolent,’ what do you mean?” He explained that the intent was to forcibly resist the eviction but without attacking the soldiers who carry it out.

The threat of a forced eviction was lifted after the Israeli government approved an allocation of NIS 130 million ($34 million) to compensate the Amona families and build an alternative settlement for them once suitable land is found. As I was talking to the hilltop youth in Ofra on Dec. 20, the state was petitioning the Supreme Court for an additional delay of the outpost’s eviction. The state’s attorneys said in their request that the evacuation plan had been derailed after a Palestinian man filed an objection to the establishment of the new settlement on the plot of land where Israel plans to build 24 housing units for the evacuees of Amona. The man claimed to have links to the land through relatives in Jordan.

The Amona trailer homes sit on a hilltop overlooking the entire district of Samaria, all the way to the Mediterranean coastal plain. The lights of the Israeli Big Apple, Tel Aviv, are visible at night. A handwritten sign at the overlook proclaims “Amona forever.”

It is hard to understand how a handful of prefabs on a hilltop above Ofra have become a symbol of Jewish settlement in the West Bank. Amona’s evacuation, whether forced or peaceful, is no threat to the settlement enterprise. A drive along the eastern mountain ridge and western Samaria is ample proof of the enterprise’s firm grounding. Israeli leaders are unlikely to be able to uproot it, ever.

Wide roads have been paved along the mountain route from Jerusalem through the settlement town of Ma’ale Adumim to the settlements of Ma’ale Michmash, Beit El and Ariel. The settlers’ state is a wide expanse of territory into which successive Israeli governments have poured tremendous resources to establish a foothold and prevent any possibility of a territorial compromise leading to the establishment of a Palestinian state.

Netanyahu pledged his government’s continued commitment to the settlement movement in his clip to Amona residents. Clearly, Netanyahu meant it far more than he meant a recently reiterated commitment to the principle of two states for two people. Considering the efforts and resources the prime minister has invested in pacifying 40 families, it is hard to see him evicting hundreds of thousands of others to make way for a Palestinian state.

“Why is the battle for Amona so important?” I asked Eli from Kdumim.

“If you vacate one settlement in the Land of Israel, it’s a precedent,” he responded. “If even a single trailer home is destroyed, it’s a dangerous precedent. It’s sacrilege. It’s a calamity.”

“Nonetheless,” I said. “Agreement has been reached on vacating Amona.”

“Yes,” he concurred. “But in its stead there will be many other Amonas. Amona forever and ever more.”

In the evening, one of the outpost prefabs filled up with dozens of little children, dancing on mattresses and singing songs, under the watchful eye of a counselor. These kids were born in the outpost, and it’s the only world they know. On the outside of the prefab, written in red, stood “The entire Land of Israel is ours” and in green letters the words “Absentees' Property equals waiver,” meaning that Palestinians who fled, leaving their lands behind, have no right to reclaim their land.

The Amona settlers agreed to leave, but they did not give up. They carried the day, not just in terms of monetary compensation, which they seem to regard as virtually inconsequential. They won the fight over Israel’s character and future. They will call the shots. They will lead, and the government of Israel and its leader will say Amen.

by Murielle KASPRZAK and Joseph SCHMID | AFP | May 26, 2022
END_OF_DOCUMENT_TOKEN_TO_BE_REPLACED