Israeli plans to expand the Ma’ale Adumim settlement and achieve territorial continuity all the way to Jerusalem might spark international uproar. 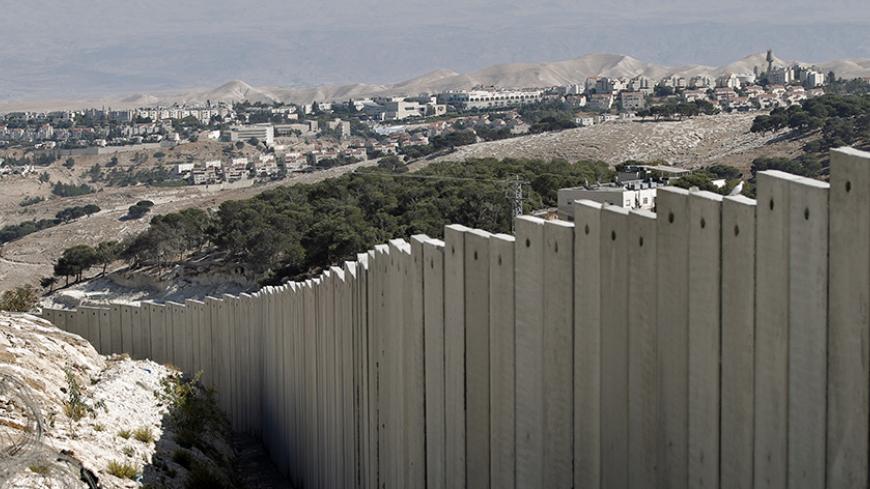 Israel's controversial separation barrier, with the Jewish settlement of Ma'ale Adumim in the background, seen from the West Bank village of Zayem, Oct. 21, 2014. - AHMAD GHARABLI/AFP/Getty Images

The court-ordered evacuation of the illegal Amona outpost in the West Bank (scheduled for Dec. 25 at the latest), and the proposed outpost Regularization law, are wars of yesteryear — limited skirmishes that divert attention from a far greater and more important war. The new battleground was inaugurated at the height of the battle for Amona and the imbroglio over the controversial bill granting legal status to wildcat West Bank outposts.

Giant billboards displaying the portraits of late President Shimon Peres, late Prime Ministers Yitzhak Rabin, Ariel Sharon and Menachem Begin, and former Prime Minister Ehud Barak have in recent weeks augured the impending clash. The clever campaign slogan says “following in their footsteps.” Next to the portrait of each leader is a citation advocating the annexation of the settlement town of Ma’ale Adumim to Israel. For example, Sharon pledged that “Ma’ale Adumim will be built as part of the State of Israel for ever more.” A petition, website, Facebook page, rally and especially pressure running across party lines have all been mobilized to promote a diplomatic measure the likes of which Israel has not undertaken since annexing the Golan Heights in 1981. The Knesset’s Land of Israel lobby, the settlement umbrella organization Yesha Council and the pro-settlement Regavim Movement have all joined forces with Benny Kashriel, the three-term mayor of Ma’ale Adumim and a veteran Likud Party politico, in a bid to push through legislation at the Knesset’s winter session imposing Israeli sovereignty over the town.

At a rally in late October, Welfare and Social Services Minister Haim Katz, the chairman of the Likud Central Committee, pledged to do everything possible to ensure that Israeli sovereignty is applied in Ma’ale Adumin. Knesset member David Bitan of the Likud, the chairman of the ruling coalition, announced, “We will do it despite all the international problems and US pressure. We shouldn’t be at all scared.” Kashriel issued the following appeal to the government and its members: “If almost 80% of the people of Israel [according to a survey conducted by pollsters Mano Geva and Mina Tzemach] call on you to impose sovereignty, you have to listen to them. There is no reason not to impose sovereignty and [not] to begin building.”

But behind the call for Israeli sovereignty over the settlement on the edges of the Green Line — a move that in itself has massive explosive potential in the regional and international arena — is a hidden, lethal booby trap. It is known as the E1 zone, a West Bank area under the municipal jurisdiction of Ma’ale Adumim, located adjacent to and northeast of East Jerusalem and to the west of Ma'ale Adumim. According to the town’s website, the municipal jurisdiction was recently expanded westward toward Jerusalem and spans 48,000 dunams (11,861 acres), and this place already has a name: Mevaseret Adumim. The website reads, “This area includes the E1 zone — the neighborhood of Mevaseret Adumim, destined for tourism development, the construction of a particularly high-end residential compound of 3,500 units, and a commercial and employment area.”

According to those eager to implement the construction plan for Jews in the E1 zone, this move would create an urban continuum linking the settlement of Ma’ale Adumim and Jerusalem. Still, the only way to achieve this territorial continuity is by annexing a strip of Palestinian villages, including Anata, A-Zaim and Azariya, separating the two cities. Be that as it may, construction in E1 would further exacerbate the severing of predominantly Palestinian East Jerusalem from other parts of the West Bank, and disrupt the territorial contiguity between the southern and northern parts of the West Bank.

In addition, to carry out the building plans, Israel’s military authorities intend to expel the Bedouin communities living in the E1 zone. Such an expulsion would violate international humanitarian law — namely the Fourth Geneva Convention — that bans forcible removal of protected civilians, such as the residents of these communities. Forcible transfer is allowed only under exceptional circumstances, and even then, only temporarily. What’s more, the E1 area is dotted with privately owned Palestinian enclaves covering a total of some 775 dunams (191 acres). Israel cannot declare them state lands, and they are not included in official planning for the area. But the plan would nonetheless greatly curtail the Palestinians’ access to their lands.

Given the strategic importance of E1 for both sides, Israeli plans to build there are considered a unilateral determination of facts on the ground, generating international opposition that goes beyond the usual objections to any Israeli construction across the Green Line. Palestinian President Mahmoud Abbas made clear that the encirclement of Jerusalem by Israeli construction in E1 and its cutoff from the northern part of the West Bank would put the kibosh on a diplomatic arrangement with Israel. Recent American presidents, Democratic and Republican alike, European leaders and UN secretaries-general have all understood that construction in E1 is a game changer in the Israeli-Arab arena. They have therefore drawn a line in the sand of the Mevaseret Adumim neighborhood that Israel must not cross.

According to media reports, already in 2011, Prime Minister Benjamin Netanyahu promised US President Barack Obama to avoid building in E1. (Netanyahu has denied the reports.) Now, Mevaseret Adumim awaits word from the next president, Donald Trump. In his first months in office, Trump appears likely to make two crucial decisions regarding Jerusalem. One is whether to sign the waiver preventing the transfer of the US Embassy from Tel Aviv to Jerusalem, thereby angering his right-wing backers, or to move the embassy to the Israeli capital and turn the Muslim world against him. The other is whether to stop Israel before it crosses the red line in Ma’ale Adumim, thereby angering Republican casino mogul and Netanyahu backer Sheldon Adelson, or to look away and get rid of the festering Israeli-Palestinian peace process.

A poll conducted by the University of Maryland after the Nov. 8 US presidential elections indicates that the American public is sick of Israeli settlements. The poll, carried out under the supervision of professor Shibley Telhami, reveals a significant change in American views on the conflict and the settlements. Sixty percent of Democrats expressed support for economic sanctions against Israel or harsher measures against it. In November 2015, that group constituted 49% of respondents. Among Republicans, an increase was recorded from 26% to 31%. Overall, the percentage of those favoring sanctions against the settlements rose this year from 37% to 46%.

Assuming that the new administration will heed American public opinion, Netanyahu should start praying for someone to petition the Supreme Court against the Regularization law proposal legalizing West Bank outposts, and for the court to stop the settlers and their Knesset henchmen before they get to the red line in Ma’ale Adumim.