Israel is reviving the E1 plan to build thousands of settlements in East Jerusalem, which would cut off the city from the rest of the West Bank and undermine any prospect for the creation of a contiguous Palestinian state. 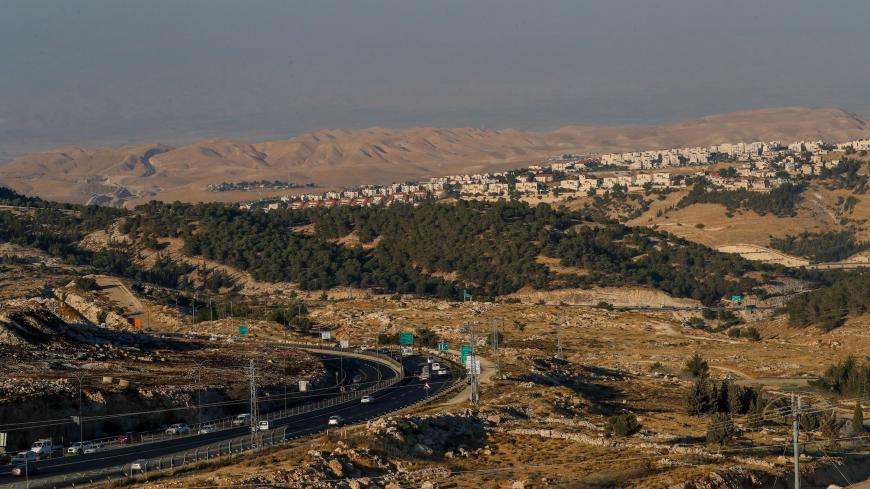 A picture taken from the E1 corridor, a super-sensitive area of the occupied West Bank, shows Israeli settlement of Maale Adumim in the background on June 30, 2020. - AHMAD GHARABLI/AFP via Getty Images)

Israel’s illegal Jewish settlements have had a major strategic and political purpose from the onset. Despite claims to “reclaim” the God-given land for the Jewish people, Israeli settlements are said to prevent the creation of a contiguous independent Palestinian state. The latest Israeli push to revive the E1 settlement plans in East Jerusalem has that precise aim.

Israeli Prime Minister Benjamin Netanyahu, who appears to be pushing for a fourth Israeli election within less than two years, appears to be eyeing the area that could connect the large Ma’ale Adumim settlement with West Jerusalem. Having failed to get the green light from Washington for unilateral annexation of Palestinian lands in the West Bank, Netanyahu appears to be intent on satisfying right-wingers in Israel by launching the controversial settlement to the east of East Jerusalem, which would physically destroy any remote chance of a two-state solution that would include a contiguous Palestinian state.

The PLO’s National Bureau for Defending Land and Resisting Settlements stated in its weekly report Aug. 10 that the Israeli government is moving forward in its pursuit to build thousands of settlement units on the lands of al-Tur, Anata, al-Eizariya and Abu Dis villages in the E1 area, within the greater Jerusalem settlement project. “[This] would completely close the eastern area of Jerusalem and encircle the Anata, Al-Tur, and Hizma’s areas. The settlement project would link all settlements in the eastern region and beyond the boundaries of the Israeli Occupation Jerusalem Municipality with other settlement[s] in the so-called Moshe Laion municipality. Thus, it turns Arab villages into besieged ones, as well as annexing wide areas of lands in the West Bank to the borders of Jerusalem,” the report stated.

The Israeli move quickly produced an important diplomatic response. The European Union (EU) along with 15 European countries submitted Aug. 6 a letter to the Foreign Ministry protesting the advancement of new homes in Givat Hamatos in the E1 area.

The European action represents a renewal of their opposition to the Israeli plans to advance construction plans in areas of Jerusalem beyond the Green Line. By issuing a strong-worded demarche to the Israeli Foreign Ministry — their second letter on the matter since May — the Europeans made it clear that settlement activity will not be tolerated. “Settlements are illegal under International Humanitarian Law. Any further settlement construction in this strategically sensitive area will have a devastating impact on a contiguous Palestinian State, as well as severely undermining the possibility of a negotiated two-state solution in line with internationally agreed to parameters,” the demarche stated.

Ofer Zalzberg, a senior analyst with the International Crisis Group, told Al-Monitor that because the White House and the centrist Blue and White party condition their backing for annexation on a sizable “compensation” for Palestinians, Netanyahu might decide before the US elections in November to approximate for making good on his annexation electoral pledge by advancing large-scale settlement construction in decisive locations, notably E1. “If Israel holds elections soon — as is currently discussed — then Netanyahu would be likelier to pursue this and Blue and White chairperson, Benny Gantz — who as defense minister wields considerable influence over settlement policy — would find it harder to oppose it,” Zalzberg said.

PLO Executive Committee member Hanan Ashrawi reminded the international community of the commitments made by the United States to ensure that Israeli settlements are curbed. In a series of tweets Aug. 7, Ashrawi quoted the 1991 US letter of assurances that settlements are “an obstacle to peace.”

Meanwhile Josh Mitnick, a Tel Aviv-based foreign correspondent, told Al-Monitor that a decision to move forward with building on E1 at this time might offer a way for Netanyahu to distract public attention away from the pandemic and the economic crisis in Israel at a time his coalition seems to be on the skids. "It also might serve as a reminder to his right-wing base — which was no doubt disappointed at his failure so far to make good on his annexation promise — that he's still their best chance to ensure Israel's continued control over the whole of the occupied West Bank."

According to the Israeli human right organization B'tselem, the E1 master plan was approved in 1999. It covers approximately 1,200 hectares of land — most of which Israel declared as state land in a legally dubious procedure. During the 1990s, these lands were made part of the jurisdiction of the settlement of Ma'ale Adumim, so it now encompasses approximately 4,800 hectares.

The plan, known as East 1 or E1, will cut off the northern part of the West Bank from the southern part and pose major obstacles to the creation of a Palestinian state.

The implementation of construction plans in E1 will create an urban bloc between Ma’ale Adumim and Jerusalem, exacerbate the isolation of East Jerusalem from the rest of the West Bank and disrupt the territorial contiguity between the northern and southern parts of the West Bank.

While Israeli officials are continuously fighting and arguing among themselves, none of the discussions are focused on international law or the rights of the Palestinians. Israeli impunity continues largely due to the apathy of Washington and the inability of the rest of the world to stand up to Israeli violations.