Is the two-state solution dead?

Palestinians are ringing alarm bells in worry that if the E1 settlements in East Jerusalem materialize, the two-state solution would be eliminated. 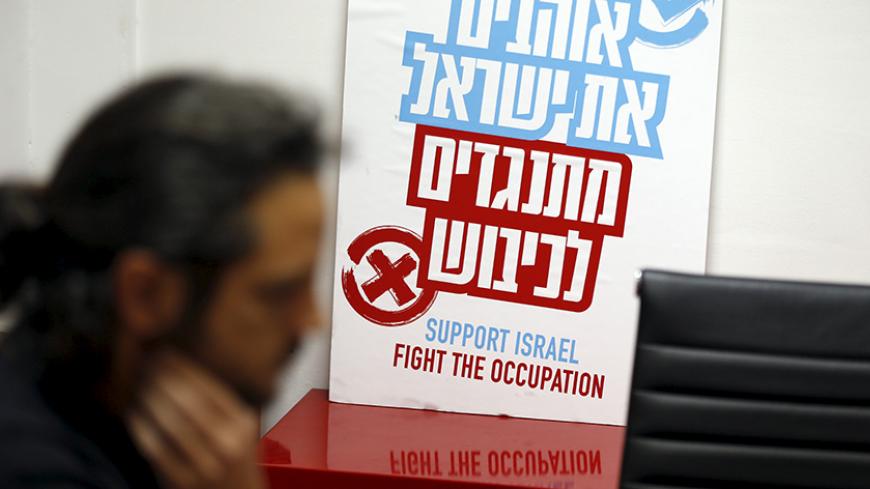 An employee of Peace Now, an Israeli NGO that tracks and opposes Jewish settlement in the occupied West Bank and East Jerusalem, works near a placard at their offices in Tel Aviv, Jan. 31, 2016. The placard in Hebrew reads, "Love Israel. Against the occupation." - REUTERS/Baz Ratner

The possibility of a game-changing series of Israeli settlements east of Jerusalem has raised alarm bells in various departments of the Palestinian government. The area in question, commonly referred to as E1, threatens to physically cut off from the north and the south of the West Bank from one another.

Palestinian worries were further triggered when Israeli Prime Minister Benjamin Netanyahu told his Cabinet Jan. 24 that Israel will give “unconditional support” to the building of West Bank settlements. Netanyahu’s statement also coincided with revelations by the Israeli group Peace Now of plans for new settlements that will be built in sensitive areas of the occupied territories.

E1 is an area of 12 square kilometers (4.6 square miles), stretching from the north and the west of the settlement of Ma'ale Adumim in the West Bank. In a report published Dec. 28 after a two-year legal battle in response to a freedom of information request, Peace Now said that 8,372 settler homes are envisioned for the strategic area known as E1.

Israel’s independent daily Haaretz reported Feb. 21 that Israeli forces have razed over 200 EU-funded buildings in the West Bank in the past two years. This year alone, around 480 people, including 220 children, have been left homeless.

A campaign was launched by the Palestine Liberation Organization (PLO) with the aim of informing the international community of what was happening in E1. The PLO’s negotiating department organized Feb. 18 a tour of the area east of Jerusalem in which diplomats, human rights organizations and the media were invited.

Hussam Zomlot, an ambassador at large for the Palestinian government focusing on international relations, who led the tour, told Al-Monitor that Palestinians wanted to show the international community the reality of Israel’s policies, which he said follows closely what seems to be a recurring manual since 1948.

“It is a manual for colonization, which we, Palestinians, have become used to. It begins with choking people by depriving them from basic services such as water and electricity supplies, denying building permits, Israeli occupying forces harassing them on a regular basis, demolitions of their homes and structures with the aim of forcing them to leave,” he said.

Zomlot and top Palestinian officials introduced the international representatives to threatened families in the Jabal al-Bab area. The Bedouins, who have already been made refugees three times, live in makeshift encampments. “They met resilient Palestinians who explained to the visitors that they will not leave unless in coffins,” Zomlot said.

But for the Palestinian officials, the visit had a much larger aim. It was meant to make sure that the international community is aware of the slow deterioration and loss of any possibility of a two-state solution. “Our goal is to get the word out that an independent and contiguous Palestinian state is becoming impossible with the ongoing Israeli plans,” he said.

Zomlot wants to make sure those representatives of the international community “are not hiding in their comfort zone,” but are able to see the reality on the ground. “We want to be sure that they know what is happening and that they know we will not accept the excuse in the future that they didn’t know,” he added.

Zomlot, who is often speaking in world capitals, decried attempts by some European leaders to wiggle out of long-standing commitments for justice and international law. “Unfortunately a few Western politicians have been receptive, of late, to a focused Israeli campaign to reverse advancement accumulated over a decade. These officials have found it easier to let us down by throwing Palestinian rights under the bus,” he said.

The Palestinian diplomatic effort is meant to prepare the grounds for a possible UN Security Council resolution that will reiterate the illegality of settlement activities and will ensure that Israeli violations of the international will on settlements has consequences.

Palestinian officials have been critical of recent statements made by EU officials who appear to be backtracking from their traditional commitments and making it easier for Israel to survive the international pressure that is being heaved on it.

PLO Executive Committee member Hanan Ashrawi criticized a recent British legislative action aimed at weakening the attempts to boycott Israel. In a statement Feb. 17, Ashrawi said the legislation "represents a serious regression in British policy and it would empower the Israeli occupation by sending a message of impunity."

Palestinian officials have often repeated the statement that the two-state solution is dead or almost dead. The E1 settlement possibility is clearly one tangible case in which such a claim can be physically checked out and proven to be truly detrimental to the potential of an independent and interconnected Palestinian state.