Believing it will deal a fatal blow to any future peace process, the Palestinian Authority has warned of escalation if Israel annexes the Ma'ale Adumim settlement in the West Bank to Jerusalem. 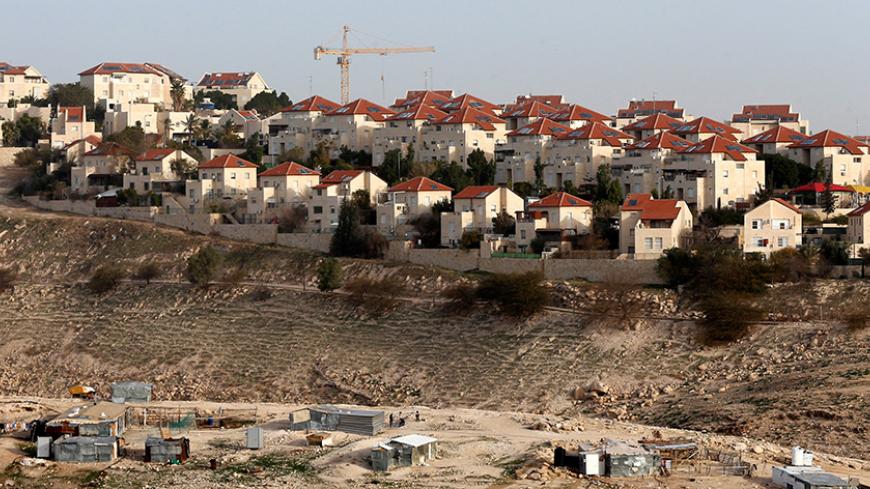 RAMALLAH, West Bank — The Israeli government delayed voting on a bill to annex the settlement of Ma'ale Adumim to Jerusalem, which was scheduled for Jan. 22. The government’s decision comes after advisers of US President Donald Trump sent letters to Israeli Prime Minister Benjamin Netanyahu, asking him not to take any unilateral decisions before meeting with Trump, Haaretz reported Jan. 22. The two leaders are scheduled to meet Feb. 15.

Ma’ale Adumim, one of the largest settlements in the West Bank, was erected in 1979 on a total area of 48 acres of land in the towns of Bethany and Abu Dis, east of Jerusalem. It is separated from the city of Jerusalem by 12 square kilometers (about 4.5 square miles) of land, known as the E1 zone and classified by Israel as state land that is part of Area C under the administrative control of Israel.

In 2005, Israel had halted construction in the E1 zone because of international criticism, but it still plans to build neighborhoods for settlers in this area in the future and annex it to Jerusalem.

Tafakji told Al-Monitor, “Annexing Ma'ale Adumim to Jerusalem means the northern West Bank would be completely separated from the south, as the area [Ma’ale Adumim] stretches from the east of the city of Jerusalem to the Jordan Valley at a depth of 35 kilometers [22 miles] and a width of 20 kilometers [12.5 miles]. This would also prevent East Jerusalem from becoming the capital of the Palestinian state, which would disrupt the demographic balance in Jerusalem in Israel’s favor.”

The Israeli government had scheduled a session to vote on the bill to annex Ma'ale Adumim to Jerusalem around the same time news emerged about the possibility of moving the US Embassy from Tel Aviv to Jerusalem mentioned by Trump only a few days before his inauguration Jan. 20.

Such talks raised the ire of the Palestinian Authority (PA), which warned Israel and the international community about the seriousness of such steps. On Jan. 19, spokesman for the Palestinian presidency Nabil Abu Rudeina said in a press release, “Annexing Ma'ale Adumim will lead to devastating results. We will consider this a serious escalation that will end any peaceful course of action. This step will introduce a new stage that no one will be able to control. If Israel were to cross its limits in this regard, then all limits will disappear.”

However, the Palestinians did not wait long before taking action. On Jan. 20, a group of activists from the popular resistance and foreign supporters of the Palestinian cause rallied in the park in Ma’ale Adumim, where they pitched a tent to protest against the Israeli government’s intention to annex the settlement and the E1 zone to Jerusalem. The Israeli police cracked down on the protesters and forced them to clear the area. Even so, this protest might as well be a prelude to further escalation by the popular resistance.

Abbas Zaki, a member of Fatah’s Central Committee, told Al-Monitor, “The Palestinians could employ several alternatives to respond to Israel’s intention to annex Ma'ale Adumim to Jerusalem. They could either resort to the International Criminal Court or the UN Security Council, which issued Resolution 2334 condemning the settlements. The Palestinians could also demand to impose sanctions on Israel, request the suspension of Israel from the United Nations or call on the PLO to withdraw its recognition of the State of Israel — and thus returning to square one in the relationship with Israel.”

Zaki said that the Palestinian street “will go to the fullest extent of escalation, because such Israeli action would prove that everything else is over,” in reference to the peace process that was established in virtue of the Oslo Accord signed between the PLO and Israel on Sept. 13, 1993.

For his part, Walid Assaf, the chairman of the PA Commission Against the Wall and Settlements and member of Fatah’s Revolutionary Council, told Al-Monitor, “Annexing Ma'ale Adumim would deal a fatal blow to the political process, after which no political negotiation could ever be conducted with Israel.”

He said, “We have plenty of options to choose from in order to respond to Israel, whether on the international diplomatic level or by resisting the occupation in all means necessary. The second intifada in 2000 and the popular uprising in October 2015 were the result of Israel messing with Jerusalem.”

Assaf added, “Without an open political horizon, Palestinian individuals, parties and organizations could take any action they find necessary and an intifada or a new uprising could break out once again.”

Political analyst and political science professor at Al-Quds University Abdul Majid Sweilem told Al-Monitor, “If Israel annexes Ma'ale Adumim, it would pave the way to annexing all settlements in the West Bank to Israel and imposing a one-sided de facto. For the PA, this would represent a dead end for the political process and the two-state solution.”

He noted, “The PA will no longer be obliged to recognize Israel or abide by the Oslo Accord. In this case, it would resort to diplomatic means within the framework of international law and the UN.”

Sweilem also said that the Palestinian leadership cannot control the outbreak of an uprising as only the people can take such a decision, and consequently, annexing Ma'ale Adumim and imposing a fait accompli by Israel would make it difficult to predict the reaction of the people — which Israel has previously failed to tame and control.

Although the PA claims to have all its options open, it prefers to avoid a field confrontation with Israel by allowing an armed intifada to erupt. The PA is rather leaning toward diplomatic and political action in international institutions and organizations that it has joined, as well as pleading its case once again before the international community to put pressure on Israel.