Israel sets the stage for further division of the West Bank

There are signs that Israel is moving ahead with its plan to establish the E1 area aimed at breaking up the West Bank and expanding the Israeli borders of Jerusalem. 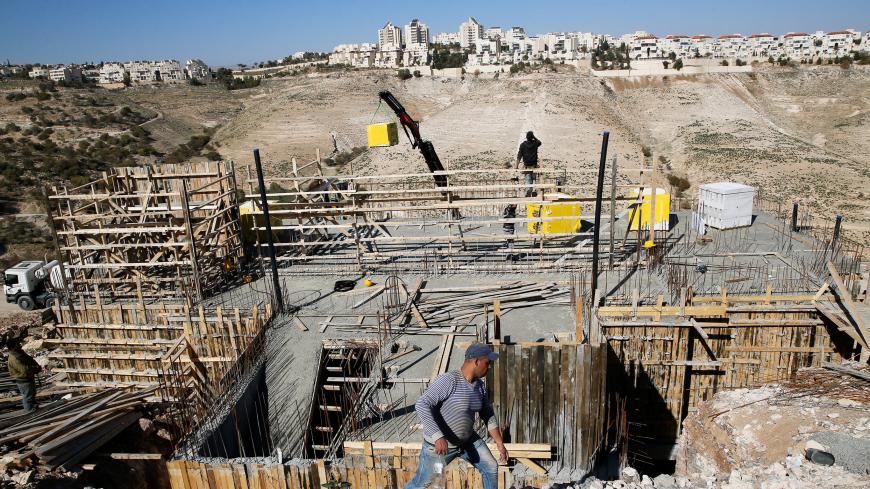 The Israeli government appears to be setting the stage for approving the E1 settlement, one of the most dangerous settlement initiatives yet, aimed at breaking up the West Bank and expanding the Israeli borders of Jerusalem. E1 is a sparsely populated area that stretches between Ma'ale Adumim and Jerusalem’s Mount of Olives. By settling this strategic area, the West Bank would physically be cut off from the north and the south.

Israeli attorney Daniel Seidemann told Al-Monitor that the E1 project has been in the books for years but is now being revived because of the support Israel feels from Washington. “E1 has devastating effects on the Permanent Status Agreement because it fragments the West Bank into cantons and will further isolate East Jerusalem,” he said. Seidemann said that in the past, when Israeli officials flirted with the idea, the international community, including the United States, came down on them like a ton of bricks.

While the Israeli aspirations to initiate this massive controversial settlement were first identified in 1996, steps are being taken today to gradually make it happen, even though the last forward movement in this regard took place in November 2012 and no direct Israeli government decision about the E1 settlement has been taken since, Seidemann noted.

One day after the United Nations General Assembly voted to declare Palestine a non-member state, a senior Israeli official was quoted Nov. 30, 2012, in The New York Times as saying, “The Israeli government would pursue preliminary zoning and planning preparations for a development that would limit access to the West Bank cities of Ramallah and Bethlehem from Jerusalem to only narrow corridors far from the Old City and downtown Jerusalem.”

While no specific Israeli government action has taken place since 2012, the Israelis have been clearly setting the stage for a major decision soon. As Israeli Prime Minister Benjamin Netanyahu is battling corruption-related legal proceedings against him, experts told Al-Monitor that an announcement on the E1 settlement is imminent.

A sign of the imminent decision on E1 came in a statement by Netanyahu at the Ma'ale Adumim settlement Oct. 3, when he said that thousands of new Israeli homes will be built in the West Bank. Seidemann, who runs the Israeli nongovernmental organization Terrestrial Jerusalem, said the only place that could fit thousands of settlement homes is the E1 area. “The aim would be to connect Ma'ale Adumim located outside the Jerusalem boundaries with Jerusalem, while isolating East Jerusalem,” he said.

Khalil Tafakji, a map expert at the Arab Studies Society, told Al-Monitor that the E1 settlement is planned as part of the Greater Jerusalem scheme that the Israelis are working on. “It is true that the legislative portion of Greater Jerusalem was temporarily suspended, but there is no reason to doubt that the delay is only aimed at finding the right time to vote on it,” he said. The Greater Jerusalem plan, suspended under pressure from the United States, aims to annex major West Bank settlements in the north, south and east to Israel.

Wafa reported that Jabal al-Baba consists of “100 buildings, 58 of which are houses, while the rest are facilities that are used for animal husbandries.” Wafa said that “because the community is unrecognized, the people in Jabal al-Baba live without electricity and get water only from tanks filled by trucks.”

Netanyahu’s decision, according to the Israeli daily Yedioth Ahronoth, came during a July 15 meeting with the Jerusalem Perimeter Forum and the Binyamin Regional Council. “Netanyahu ordered the removal of the Bedouin encampments pitched along Highway 1, leading from Jerusalem down to the Dead Sea,” the Israeli news website Ynetnews reported Nov. 16.

Mahdi Abdul Hadi, the founder and director of the Palestinian Academic Society for the Study of International Affairs (PASSIA), told the Saudi-based Arab News that Israeli actions in and around Jerusalem have always had three strategic goals. “They aim to empty Jerusalem of its indigenous Palestinians, strengthen Jewish settlements and reject any Palestinian national or religious connection to Jerusalem,” Abdul Hadi was quoted as saying.

In August, Israeli authorities dismantled a structure in the village that was slated to open as a kindergarten for 25 children; it was built without a permit. Eight members of the European Union demanded that Israel pay the cost of the structures, which its army destroyed.

According to the Times of Israel’s Nov. 21 report, orders for the Bedouin residents to evacuate were discovered earlier this week near at least two other unrecognized Bedouin villages in the northern Jordan Valley. These villages are Ein al-Hilweh and Umm al-Jamal. Residents told the Israeli newspaper that the notices they found on their land were also signed by Numa on Nov. 1. According to the Israeli paper, the army order prohibits “any further construction in the village as well as the entry of individuals or equipment for the purpose of construction.”

The Israeli action had also produced strong reactions from the United Nations. “Bedouin communities in the hills to the east of Jerusalem and in the central West Bank are at risk of forcible transfer due to a 'relocation' plan advanced by the Israeli authorities. The authorities have justified the plan, claiming that the residents lack title over the land and that the relocation will improve their living conditions,” said the UN Office for the Coordination of Humanitarian Affairs in its Aug. 31 report.

Israel’s right-wing government is setting the stage for announcing one of the most crucial and destructive settlement enterprises that will make the possibilities of a two-state solution virtually impossible. A contiguous state is a critical element that will ensure the sustainability of an independent Palestinian state. The removal of the Bedouin communities is a dangerous sign that the settlement’s announcement could be imminent.