Bedouin communities in the highlands of Jerusalem are facing evacuation threats by Israeli authorities who purportedly plan to use the land to expand the settlements. 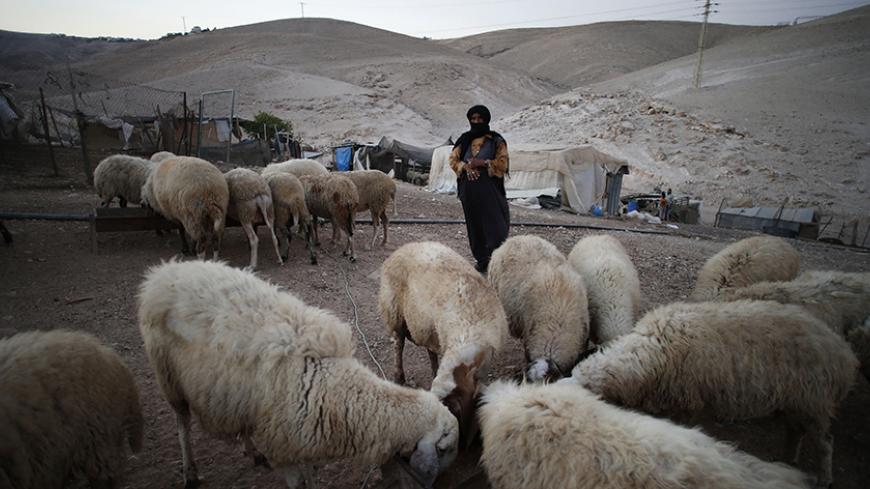 A Palestinian Bedouin woman stands next to her sheep in the West Bank village of Al-Eizariya, east of Jerusalem, Sept. 18, 2014. - REUTERS/Ammar Awad

RAMALLAH, West Bank — For years, Umm Mohamad, from the Abu Nawar Bedouin compound north of occupied Jerusalem, has been trying to find a house for her son Walid so he can get married and settle in the area where she lives. Her efforts have not paid off, though, as the Israeli occupation forces refuse to allow them to build a new house, not even a tent.

The house Umm Mohamad and her sons are hoping to get is only a tent, but the plan is far-fetched as Israel is trying to expel them from their land to another location that was built to accommodate Bedouin and other communities. “Occasionally, a military occupation force raids the place, counts the houses and people and destroys any new building immediately,” she told Al-Monitor.

Another resident, Umm Khaled, and her family — made up of her husband and eight children and grandchildren — are part of the 700 Bedouin living in the area facing the Ma’ale Adumim settlement — the largest in the West Bank, located in the east of Al-Eizariya in the Abu Nawar compound.

Israel issued a May 14 decision to expel the population to a region in the north of Al-Eizariya numbering 46 settlements of Bedouin groups from the highlands of Jerusalem.

The Abu Nawar Bedouin community has lived in this area since the 1960s, before the Ma’ale Adumim settlement was established in 1977.

The highlands of Jerusalem is a strategic region linking the West Bank and Jerusalem. Israel is seeking to control it completely and separate Jerusalem from the West Bank to reach its goal of establishing a Greater Jerusalem in 2020.

Umm Khaled and other residents told Al-Monitor that they would not leave their land voluntarily, nor take another forced uprooting. Their parents and ancestors had been forced to emigrate from their homeland Tala Arad in the Beersheba desert in the 1948 war, after which the State of Israel was established.

Abu Imad al-Jahalin, representative for the Abu Nawar community, told Al-Monitor that this was not the first expulsion warning from Israel. Since 2006, each time the Bedouin put up a new tent, another warning would come. “But the latest warning was collective,” he said. “In the past few years, the threat to the community has grown more than any time before. We are facing a new Nakba.”

The warning allocated 35 pieces of land for all of the more than 170 families, said Jahalin, who went on, “The place they are expelling us to will be like a cemetery for the Bedouin. We will be confined to a surface area of barely a dunam [a quarter of an acre]. It is an urban rather than Bedouin environment.”

The Bedouin lifestyle relies on raising animals that graze on pasture lands. The Bedouin now face an imminent threat of being stripped of the lifestyle they know and thrown into an urban life with concrete houses and no mobility or room for grazing.

The Bedouin are paying the price of their persistence on their lands and their resistance to expulsion orders. The problems they face are endless, ranging from water scarcity to a lack of schools and infrastructure. The Bedouin are not allowed to build or graze their livestock, which is sometimes even confiscated, and Bedouin children are chased by settlers.

“We haven’t had water in the area for 25 days now. We are forced to transport water on animals to the tents. There is no school, health center or first aid in the area. The Bedouin have to walk a distance of 4 kilometers [2.5 miles] to reach the closest center,” Jahalin added.

Al-Monitor met with elementary school students during a tour of the compound. One of them, Majed, 10, said, “I start walking to school each morning at 6 a.m. to arrive there by 8 a.m. Sometimes, military jeeps block our way and hold us up in the heat of the sun.”

Umm Sleiman, who lives in the Bedouin area, said that since the school is so far away, she decided not to send two of her daughters, Hajar, 8, and Asia, 11, there and opted instead for the only kindergarten in the area to teach them. She fears for them should they enroll in the school, because they would have to commute a long distance with no transportation facilities.

She is also afraid of the attacks by settlers. “Three years ago, a settler chased my eldest daughter, Youssra," she said. "She managed to escape and reach the compound safely. Ever since, I have not sent [any of my children] to school.”

Naja Fraihan, a teacher, founded the Azhar Abu Nawwar Kindergarten with the help of her friend Amal Krishan two years ago. She told Al-Monitor, “The children of the Bedouin area did not attend kindergarten because the closest one was 6 kilometers [4 miles] away. Parents had to leave their children home until they reach the age of six before enrolling them in school. This prompted us to open the kindergarten.”

Fraihan, one of the few people there to complete her university education at Al-Quds University, where she studied Arabic, said, “At first, we started teaching the children in a tent after having collected money from parents and bought the stationery. Then, we submitted a request to the European Union, which allocated a grant for a small place that turned into a kindergarten that currently welcomes 24 children.”

Fraihan noted that the Bedouin compound contains 74 children, whose ages range between 4 and 14. Not all of them could go to school. They are also deprived of extracurricular and leisure activities. She asked for official support from the Palestinian government, which seems completely absent.

Jerusalem District Gov. Adnan al-Husayni said that Abu Nawar is facing a dangerous reality, especially with the latest warnings that aim to evacuate this area, situated amid three big settlements east of Jerusalem.

Husayni added that the occupation forces do not allow the Palestinian Authority to build or do work in the area, as it is under complete Israeli control. As a result, citizens have to seek government services in the nearby Al-Eizariya village, about 8 kilometers (5 miles) away. “If the Bedouin are moved from this area, the lands will be used to build new settlements and expand the existing ones," he told Al-Monitor. "This will also hinder Jerusalem’s natural extension into the east. This is a most dangerous project and should be countered.”