Palestine’s ancient Bedouin community has been threatened with eviction by Israel, which plans to use their land to expand settlement operations, reports Jihan Abdalla. 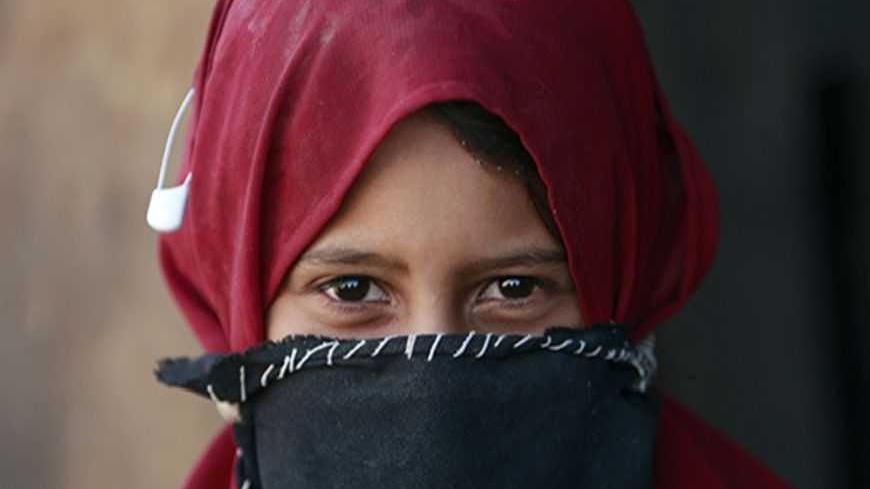 A young Bedouin girl is seen near the West Bank city of Jericho, Aug. 18, 2008. - REUTERS/Ammar Awad

WADI ABU HINDI, West Bank — To get to the Palestinian Bedouin village of Wadi Abu Hindi, you would have to drive 4 km through an unnamed dirt road, past a large landfill leachate pool and under a narrow bridge.

Living in makeshift tents and raising livestock, Jahalin Bedouins have inhabited the barren hills lining both sides of the road from Jerusalem down to the Dead Sea for decades. But their ancient lifestyle is slowly dying, as Israel increasingly tries to evict them from the land.

The Bedouins say that, before 1967, the year Israel occupied the West Bank, they were semi-nomadic herders with access to vast amounts of grazing fields and water. They made a good living selling off their produce in several cities, mostly in Jerusalem.

But over the years, Israeli restrictions on their movement and access to land and water have forced them to relinquish important aspects of their ancient way life.

Mohammad Hamadeen, the mukhtar — or community leader — of the village of Wadi Abu Hindi, one of 20 communities in the area, says most Bedouin families once owned at least 200 heads of cattle each. Now, hardly anyone owns more than 60 heads.

“The most important thing for us Bedouins is to be able to inhabit an area that we like, move freely to wherever there is water, and preserve our livestock, our only source of income,” Hamadeen told Al-Monitor from a spacious zinc tent overlooking the village.

All aspects of their lives have been subject to Israeli restriction, Hamadeen, 53, says, making their day-to-day lives extremely difficult and increasingly sinking them into poverty.

Israel says the Bedouin camps lack building permits, and are thus illegal. They are located in the so-called “Area C” of the West Bank, where Israel retains control over planning and zoning.

Hamadeen recalls how in 1997, Israeli authorities demolished their encampment three times. They later won a Supreme Court ruling that allowed them to rebuild their homes using only zinc. Their more recent structures, however, which include prefabricated homes, have pending demolition orders against them.

The village, Hamadeen says, is home to some 800 people. It is connected to an intermittent water supply from a nearby village, and has no electricity or access to medical care. Residents rely on battery-operated generators in an area marked by scorching summers and windy, cold winters.

They look on with envy, as the nearby Jewish settlers of Kedar living above them on the hill have a wide access road, stone houses and a large public swimming pool.

Most of the Jahalin Bedouins, who live in small, scattered communities in the area, are registered refugees with the United Nations Relief and Works Agency (UNRWA). Before 1948, the year they were evacuated from their land in the war of Israel’s creation, they lived in the village of Tel Arad, near Beersheba.

The UNRWA says about 17,000 Bedouins are living in the West Bank.

In 1998, Israel forcibly relocated 1,050 Jahalin Bedouins from land now part of the Jewish settlement of Maale Adumim to a site close to the Abu Dis landfill.

The village of al-Jabal, just a few hundred meters from a relentless string of trucks arriving to dump garbage, is also too small to raise sheep or goats, thus forcing residents to sell off most of their livestock. They say they lost their Bedouin lifestyle and are now living an impoverished, semi-urban life.

In 2006, Israel proposed relocating most of the Bedouin communities, over 2,000 Jahalin, including Wadi Abu Hindi, to a site even closer to the landfill. Following petitions by the Bedouins who argued the site would be hazardous to their health, Israel decided to propose a different site, called Nuema, near the city of Jericho. Lawyers say the summers there are even hotter, and there is no grazing area.

“The state of Israel is determined to move the Jahalin to make way for plans to build more settlements,” Lecker told Al-Monitor.

Lecker says Wadi Abu Hindi and the other Bedouin encampments fall on land that is of strategic importance to Israel. Near the area known as E1, the stretch of land northeast of Jerusalem and west of the settlement of Maale Adumim. Israel has for years put on hold plans to build there.

Former U.S. President George W. Bush put pressure on Israel to freeze the plans, and Palestinians say settlement building in E1 would severe the West Bank into two, and deny them a contiguous state.

But Israeli Prime Minister Benjamin Netanyahu said that he would revive the building plans for the area after the Palestinians won non-member state status at the United Nations in November 2012.

Besides the constant threat of relocation, Hamadeen says, the community suffers from an unbearable stench.

He points to the leachate pool near their village, which collects the decomposed liquid from the Abu Dis landfill, a few kilometers away. Hamadeen says when it rains, the uncovered pool overflows and streams into their community. Their children play with it, and their goats often drink it and die.

“It reeks here all the time,” Hamadeen says. “In the winter it overflows and in the summer it smells even worse.”

The Israeli Ministry of Environment says it has demanded the Abu Dis landfill to be shut and rehabilitated years ago. In operation since the 1980s, the ministry says it lacks the infrastructure to deal with the amounts of waste that are dumped in it daily, compounding the damage to its surroundings.

Naomi Tsur, deputy mayor of Jerusalem, contends that the landfill has been “badly managed” and the liquid that leaks from it is a result of that.

“For a while, it was convenient for everybody to continue to dump there, except for the environment, which is suffering,” Tsur told Al-Monitor.

Tsur, who is in charge of the environment portfolio in the city, says the main dangers of continuing to dump tons of waste in the landfill is the large amounts of methane gas in the air and pollution to the ground.

She says the city is now dumping 500 tons of garbage a day there, half of what they used to, in a gradual effort to have it closed down entirely and have the pool pumped by the end of April. The government, she adds, has been systematically shutting down landfills throughout the country.

At 1 p.m., a faint sound of a bell ringing is heard from Hamadeen’s tent, followed by hurried footsteps and children’s chatter.

In 2010, with the help of an Italian NGO and a collective of architects, the residents of Wadi Abu Hindi revamped their school using mud, straw and bamboo. It caters to 130 Jahalin boys and girls.

One of only two schools in area, some children from other communities have to walk up to an hour each way over steep, rocky hills to get to school. Some children come on donkey back, which they leave in a designated “donkey park.”

The school has so far been spared demolition, providing some relief to the children and their parents who say they are constantly worried for their future.

“We are afraid that one day, the Israeli court will be convinced that relocating us is a good idea,” Hamadeen says. “That would be a disaster.”

Jihan Abdalla is a Palestinian freelance journalist and television producer based in Jerusalem. Follow her on Twitter @jihanabdalla