A report published by Palestinian rights group al-Haq shows how Israel has denied Palestinians their share of water resources since 1967, Jihan Abdallah writes. 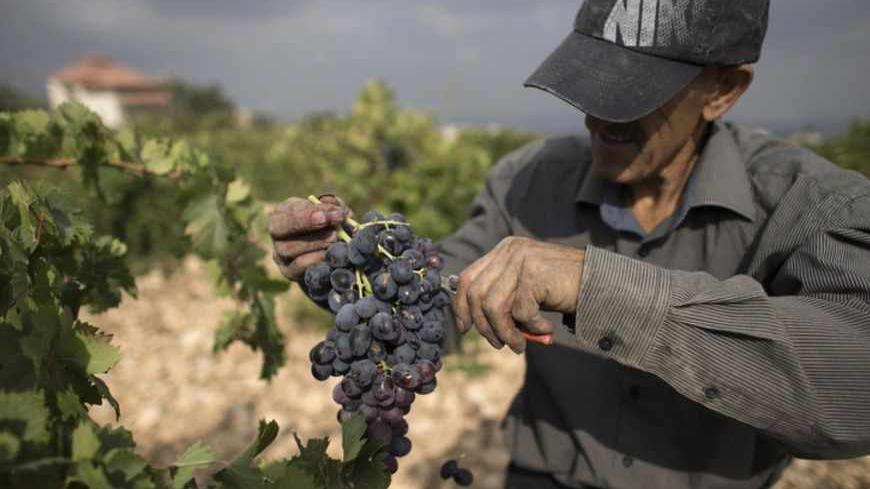 A Palestinian farmer harvests grapes in a vineyard in the West bank village of Beit Ummar, north of Hebron, Sept. 9, 2012. - REUTERS/Darren Whiteside

AL-KHADER, West Bank — In the small, cement and brick homes on the parched hill of al-Khader, a West Bank village near Bethlehem, the Musa family does not have running water, let alone any to irrigate their arid grape and olive field.

Under a baking sun, children roam barefoot on bone-dry soil while women hang faded clothes on wires. Their father, Ahmad Musa, says their only source of water is the expensive tankered water that often requires a long wait.

“We use water just for the bare minimum, drinking, cooking and washing,” Musa told Al-Monitor. “Everything else is out of the question.”

According to Palestinian rights group al-Haq, some 313,000 Palestinians across 113 communities in the occupied West Bank are not connected to a water network.

In 1967, the year Israel occupied the West Bank, East Jerusalem and the Gaza Strip, water resources were brought exclusively under Israeli control. Al-Haq says since then, Palestinians have been denied access to their rightful share of water and have been severely restricted in their ability to develop their water resources.

Musa, a father of six children, says three years ago he tried to build a rainwater cistern in his field, but the Israeli authorities quickly issued it with a demolition order, citing a lack of a building permit.

According the United Nations Office for the Coordination of Humanitarian Affairs, the practice of demolishing Palestinian wells and water reserves in the West Bank has intensified in recent years, with over 200 structures demolished between 2009 and 2011. And permits are nearly impossible to obtain.

Musa says if they had access to sufficient, affordable water, his family would be able to live off their ancestral field, selling their grapes, olives and fruit in nearby markets.

That, he says, is the reason why Israeli authorities prevent them from building a cistern, and why they do not have any running water.

“They don’t want us to plant or grow anything, they just want us to have barely enough water for drinking and that’s it,” Musa says looking at the unfinished, empty hole in the ground.

Relying only on scarce rainfall, his 60 gnarled, sunbaked trees only produce enough to feed his own family, he says.

He works in construction in nearby villages and is barely able to make ends meet.

Under the Oslo agreements signed in 1993, Israel controls the vast majority of West Bank water resources by retaining full control over “Area C,” 60% of the West Bank where the water is most plentiful.

A report released Monday by al-Haq says Israel claims up to 89% of an underground aquifer that is largely located in the West Bank, giving Palestinians only access to the remaining 11%.

The report says Israel’s insufficient allocation of water has forced Palestinians to rely on Israel’s national water company, Mekorot, to meet their needs.

A UN fact-finding mission in January found that Mekorot supplies almost half the water consumed by Palestinian communities.

Some 4.2 million Palestinians live in the West Bank, Gaza Strip and East Jerusalem, consuming, al-Haq says, on average 73 liters [almost 20 gallons] of water per capita per day. While 7.7 million Israelis consume an average of 300 liters.

The World Health Organization recommends 100 liters of water per capita per day as the minimum quantity for basic consumption.

The direct results are clearly visible.

While fruit orchards in the farming town of al-Khader, south of the city of Hebron, are dry because they rely only on scant rainfall, a settler farm across over the hill is lined with black pipes for constant dripping.

Tawfiq Salah, mayor of al-Khader, says some homes in the village receive only an intermittent supply of water, and some living in more elevated areas, receive no water at all.

The vast majority in the village of 13,000 rely on tankered water, according to Salah.

“There is a grave injustice in the division of water, and the results have been catastrophic on al-Khader,” Salah told Al-Monitor.

Shadad Attili, head of the Palestinian Water Authority, says Palestinians purchase 56 million cubic meters of water a year, mostly for domestic consumption to make up for the severe shortage.

“We have been turned into Mekorot’s best clients,” Attili told Al-Monitor.

Attili says as long as the peace talks with Israel are on hold, equal access to water will remain a constant losing battle for Palestinians.

Distribution of water resources, the status of Jerusalem, the borders of a future Palestinian state, the Jewish settlements and the fate of Palestinian refugees are “final status issues” to be resolved in peace negotiations — halted in 2010 over Israel’s refusal to stop expanding settlements.

With little hope for a resumption of talks in the near future, Atilli says Palestinians will continue to receive an unequal share of water and face restrictions on developing their supply systems.

Multiple attempts by Al-Monitor to reach an official at the Israeli Water Authority for comment failed.

Not just about water

For most Palestinians living in Area C of the West Bank, it is impossible to separate the struggle over water from any of the other Israeli restrictions imposed.

Despite having proof of ownership of the land dating back to 1926, the Musa family home, as well as that of his father and two brothers, was demolished three times, citing a lack of building permits.

But the pressure to remain on the land remains strong, he says, not least because they have nowhere else to go. They rebuilt their homes after each demolition.

The al-Haq report says Israel’s discriminatory water policy in the West Bank is intrinsically linked to its settlement expansion strategy.

By imposing a draconian permit regime and demolishing structures without them, Israel aims to “forcibly transfer Palestinian communities from their homes,” the report said, “which is instrumental to Israel’s unlawful transfer of its own civilian population into occupied territory.”

According to a European Union report issued last year, in 1967 between 200,000 and 320,000 Palestinians lived in Area C of the West Bank. But demolition of Palestinian homes and structures, and the prevention of new buildings, has seen the population drop to 150,000.

“Our struggle here is at once all about water and nothing to do with it,” Musa says.

by Murielle KASPRZAK and Joseph SCHMID | AFP | May 26, 2022
END_OF_DOCUMENT_TOKEN_TO_BE_REPLACED