Palestinian villages such as Al Hadidiya in the Jordan Valley are suffering from chronic water shortages, write Layan Masri and Loor Awwad. 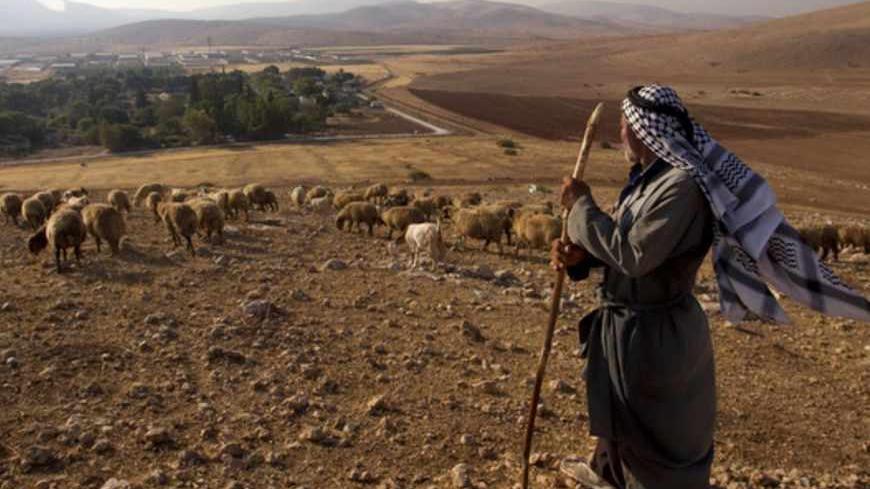 A Palestinian from the herding community of Al Hadidiya in the Jordan Valley herds livestock Sept. 12, 2011. - REUTERS/Darren Whiteside
Layan Masri
May 6, 2013

The dirt roads leading to the Palestinian community of Al Hadidiya can be recognized from the tire tracks from cars and tractors in the winter mud.

Al Hadidiya is located in the northern Jordan Valley, a small village with a population of less than 200. Most of them are children, women and elderly, as most of the younger people have moved out in search of jobs or to pursue higher education. Palestinians residing there live in tents surrounded by arid mountains and rocky fields.

Most of the year, the hills that dot the area are yellowish, dry and dusty. Like all other Palestinian villages in the Jordan Valley, Al Hadidiya struggles to supply itself with water. Instead of taps and sinks, yellow, rusty water tankers are omnipresent, scattered amid the tents and sheep pens. A few acres of fields surround the area, stretching wherever the land is flat enough — yet the earth remains dry and the fields barren most of the year. With the cost of tanked-in water four to five times more expensive than tap water, the residents of Al Hadidiya have barely enough water to sustain themselves, so there’s no question of using it for agriculture. Only during the rainy season in winter are crops sowed and harvested — not cash crops, but rather wheat and barley to serve as fodder for the sheep and goats.

Standing in the empty fields, Abu Saqr, one of the elders of Al Hadidiya, points toward a greener area a few hundred meters away, saying, “Here is one of the settlements.” On the adjacent hill, the monochrome landscape gives way to an oasis of colors: a small island of lush vegetation, red roofs and white walls.

“Their community is full of trees; they get all the water they need,” explains Abu Saqr. This small paradise, however, is closed off by electric fences, barbed wire, security cameras and patrols, and accessible only to Jewish settlers. Traffic signs point toward the small settlement, Ro´i; Al Hadidiya is not indicated on any sign.

Established first as a military outpost in 1976, the settlement was converted for civilian use two years later. Today, the 153 Jewish settlers living there work in greenhouses and neatly tended fields, growing herbs, grapes and flowers earmarked for the export market, and practice fish farming. An Israeli well, protected by fences, supplies the settlement with large quantities of water pumped from a natural spring. Public figures show that on average, each settler from Ro´i consumes 431 liters of water per day — not including the quantities of water used for agriculture and fish farming.

In Al Hadidiya, the average amount of water available stands at 22 liters per person per day — a figure similar to communities in Sub-Saharan Africa.

“We can´t access any water sources anymore,” complains Abu Saqr. “The Israelis have drilled wells on our land and pump water to the settlements, yet we are forbidden from consuming any of it. Here is the pipe that brings them water — it goes through our land,” he adds, pointing out a large, high-pressure pipe. Not only are the residents of Al Hadidiya prohibited from accessing local water sources, they also can’t build a network to obtain running water from elsewhere. To do so, the community would need to obtain a permit from the Israeli Civil Administration, since it is located in Area C, an area that covers 60% of the West Bank and where Israel retains both security and civil control. Unable to obtain a permit, the people of Al Hadidiya have resorted to collecting droplets of water that spill from the Israeli pipes.

As in most of the Jordan Valley, the village is surrounded by closed military areas as well as army bases and military checkpoints. For years, the residents of Al Hadidiya have suffered from harassment, demolitions, displacement, beatings and intimidation at the hands of Israeli soldiers. Today, all the structures in the community — mostly tents and sheep pens — have standing demolition orders, and can be torn down by the army at any given time. The army has increasingly resorted to confiscating water tanker and the tractors used to bring them to the community, charging exorbitant fines that villagers cannot pay, forcing them to leave and resettle in Palestinian cities. Herders are routinely arrested by Israeli soldiers, their flocks straying off while their herder is detained for several hours without charge before being released, sometimes after suffering beatings. Since 1997, the community has shrunk from over 40 families to fewer than eight, mostly due to demolitions of homes or tents.

The case of Al Hadidiya is not unique or isolated. Throughout the Jordan Valley and the West Bank, Palestinian communities are constantly subjected to many different forms of pressure to leave their lands, while Israeli settlements expand. Palestinian lands and fields are being swallowed up and turned into Jewish-only communities or high-tech agricultural lands, growing water-demanding crops for export with Palestinian water extracted from the West Bank.

Layan Masri is a Palestinian student living in Ramallah and studying at Birzeit University.

Loor Awwad, born in Jerusalem and residing in Ramallah, is a recent graduate from Birzeit University.