PA Helpless to Combat Expansion By Israel in Jordan Valley

The Palestinian Authority is struggling to come up with answers to Israel's settlement expansion in the Jordan Valley. 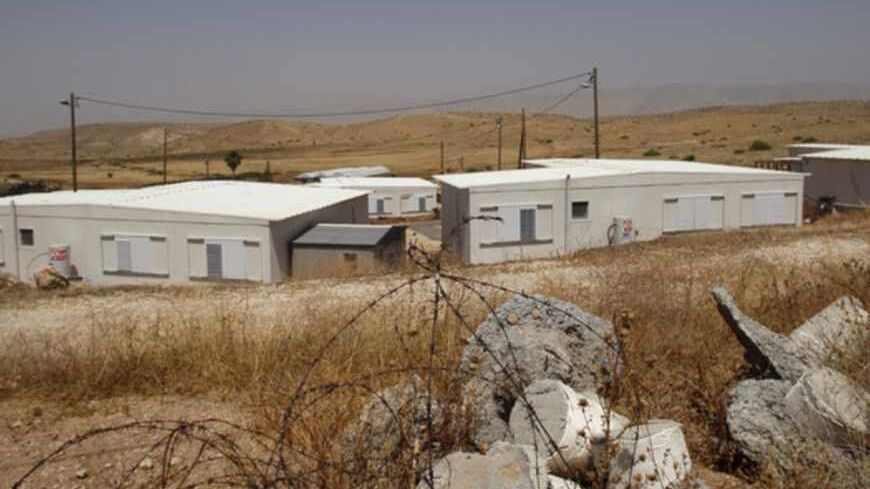 Prefabricated houses are seen in the West Bank Jewish settlement of Maskiot in this May 18, 2009, file photo. - REUTERS/Baz Ratner

Comprising 30% of the West Bank, the Jordan Valley has long been the target of demolitions, settlement and forced displacement in what seems to be a successful effort by the Israeli government to change the geographical political map of the territory. Before the 1967 war, the valley belonged to the governorates of five cities in the West Bank: Toubas, Nablus, Jerusalem, Bethlehem and Hebron.

Abdelrahim Bishara is a 58-year-old man living in a Palestinian community in the Jordan Valley called Al Hadidiya. His property has been demolished seven times, with the first demolition in the freezing winter of January 2001.

“The Israeli army wanted me to transfer to another place called Atuf, but I refused. If you agree to move once, you will never stop moving,” said Bishara, also known as Abu Saqr.

The Jordan Valley, according to Abu Saqr, has been targeted for ethnic cleansing since 1967, especially after the birth of Palestinian armed revolutionary parties. The Bedouins and shepherds would guide the fedayeen — freedom fighters — to the other side of the Jordan River, which consequently led the Israeli authorities to try those Bedouins and shepherds in military courts, in addition to imposing increasingly hefty fines of between 10 and 1000 Jordanian dinars ($14–$1400) in order to deter and “urbanize” them after destroying their ability to sustain their way of life.

Israeli policies were modified to include pursuing the livestock of the Bedouins, either by killing them in droves or by “arresting” them. Each head of cattle costs 10 dinars a day at the animal prison, referred to as the carateen, and the Bedouins themselves are responsible for providing food for their imprisoned livestock. The Israeli government then devised a law that allowed them to confiscate any land that was not cultivated for a specific amount of time, and due to the Bedouins moving from one area to another twice a year in the summer and winter, a lot of land was stolen in this way.

Then in December 1987, the first intifada exploded on the scene. The Jordan Valley was forgotten for a bit as the Israeli army concentrated its repressive tactics in the West Bank and Gaza Strip. But with the advent of the Oslo Accords in 1993, the inexperienced and unprepared PLO negotiators and the Israeli government agreed to classify the entire Jordan Valley, with the exception of the city of Jericho and the village of al-Auja, as Area C, giving Israel full civil and military jurisdiction over the land.

“Oslo was a massive disaster for the Palestinians,” says Abu Saqr. “It was signed in the interests of the negotiators in the long run so they could receive monthly salaries at the expense of destroying the lives of Palestinians in the areas they signed over to Israel.”

Last year, then-prime minister Salam Fayyad met with Abu Saqr and, according to the villager, promised to alleviate the suffering of the Bedouins, which Abu Saqr dismissed as empty talk.

“The PA is responsible for the security of Israel,” he stated. “There are five checkpoints in the Jordan Valley. At one of the checkpoints, Fayyad’s convoy was replaced with an escort by the Israeli army. When he arrived here, I greeted him by saying, ‘Welcome, prime minister of Israel!’”

Mohammed Jalayta, the mayor of Jericho, told Al-Monitor that designating the Jordan Valley as Area C was supposed to be a temporary agreement between the Israeli government and the nascent Palestinian Authority (PA).

“It is well known that under the Oslo Accords, the Jordan Valley would be eased back under the control of the Palestinian Authority after some time,” Jalayta said. “The PA actually has plans to expand its presence in the Jordan Valley in order to reclaim the territory.”

But with Israel establishing facts on the ground rapidly, the problem lies now in dealing with the Israeli presence as a reality, and not mere squabbling over who has authority over what.

“Israel’s control of the Jordan Valley is not for security reasons, as it claims,” said Iqab Daraghmeh, the mayor of Tubas. “It is primarily for economic reasons, in addition to using the land for the biggest training ground for its military in Palestine,” he continued.

“What was agreed in Oslo produced results we did not expect,” he told Al-Monitor. “How can we talk about a Palestinian state when over half of the West Bank is under Area C? Of course, there’s constant communication with the PA leadership on our part, but we are forced to deal with a reality we did not imagine.”

“What is being done in the Jordan Valley is classified as war crimes,” said Jamal Jum’a, director of the Stop The Wall campaign, pointing to the temporary evictions of whole Bedouin communities in order for the Israeli army to use their land as training and firing zones. “Palestinians expected the Palestinian Authority to use its upgraded status at the UN General Assembly to take Israel to the International Court of Justice [ICJ], but many viewed [US President Barack] Obama’s visit in March as a means of pressure warning [Palestinian Authority President] Mahmoud Abbas not to go.”

Ignoring the plethora of Israeli violations, Abbas told the media that he would only go to the ICJ if Israel decides to go ahead with its plans to build settlement construction units in the E-1 zone, which would sever the West Bank from Jerusalem.

“The Arab League’s proposition of a land swap is very dangerous,” Jum’a continued, “because it cancels out that there ever was an occupation and instead treats the ongoing colonization and occupation as a matter of conflict over land.”

With 36 illegal Israeli settlements (with a population of approximately 9,000 settlers) and 60,000 Palestinians in the Jordan Valley, the apartheid system not only governs land ownership, but, as Al-Monitor has reported, also water and education aspects.

Once abundant with natural springs, water has dried out due to Israel digging wells to supply the settlements, which in turn drain out the springs. The settlers get a 75% discount on their water bills, whereas the Palestinians are forced to buy expensive water from tanks.

Israel forbids the building of any structures, including schools, in Area C, but instead of the PA challenging this policy, the undersecretary of the Ministry of Education, Jihad Zakarneh, suggests that buses transfer children to the nearest institutions, a journey that takes several hours.

“By the time the children get to the school, they are asleep, since they had to be awake before sunrise,” Abu Saqr scoffed.

“Many countries in the world have undergone occupation and colonization, but our case is unique in that our own leadership are traitors. What I ask from the Palestinian people is to not keep bowing their heads to their own leaders. We should be fighting against one occupation, not two.”

Abu Saqr is married to three women and has 25 children in total.

“Who else will protect my land if not my children?” he asks. “The PA won’t do it, so I’m raising my own little tribe to resist Israel.”

by Murielle KASPRZAK and Joseph SCHMID | AFP | May 26, 2022
END_OF_DOCUMENT_TOKEN_TO_BE_REPLACED