Ain al-Auja spring in the Jordan Valley is threatened with settlement expansion after Israel announced a plan to take over lands surrounding the area. 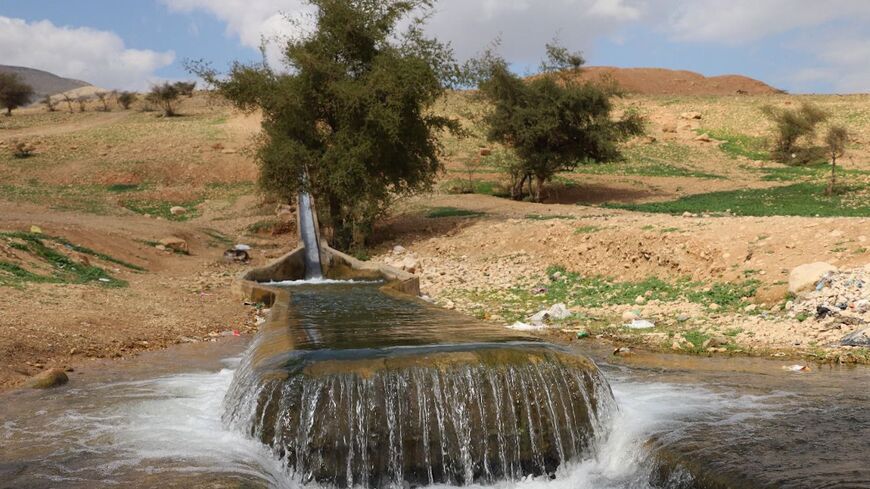 Atta, a 42-year-old Palestinian from Ain al-Auja village, which lies north of Jericho, on the Palestinian-Jordanian border, would regularly visit the spring in the village to relax and regain a sense of peace. Sometimes he would even bring his family along.

The village is one of the few breathing spaces in the area. “During the lockdown imposed by the coronavirus pandemic, this place was the best venting spot. I liked to come here to enjoy the beauty of nature and its biodiversity,” Atta, who did not give his last name, told Al-Monitor.

During the Eid al-Fitr holiday, Atta and his family went for a walk around the village and they were pleased to see other visitors in the area.

The Palestinian Tourist and Antiquities Police estimated that about 600,000 visitors from the area and various parts of the Palestinian territories visited the city of Jericho and its surroundings during the Eid al-Fitr holiday in early May. About 200,000 of them visited the spring of Ain al-Auja.

In June, the Palestinian Agriculture Institutions Coalition (PAIC) launched an environmental campaign dubbed “Let’s protect it to protect us,” to shed light on the Ain al-Auja spring from an economic, social and human rights perspective. The campaign is part of the Environmental and Climate Justice Program in Palestine implemented by PAIC in partnership with the Palestinian Environmental NGOs Network and We Effect, a Swedish development cooperation organization.

“Ain al-Auja spring is one of the many springs in Jericho and it flows from the Jerusalem-Hebron mountain range. The series of slopes around the spring are home to a number of grottos and caves that were inhabited in different periods of time, especially in the Chalcolithic period 5,000 years ago,” said Iyad Hamdan, director of the Palestinian Ministry of Tourism and Antiquities department in the city of Jericho.

He told Al-Monitor that the area houses various antiquities from different historical periods, particularly the Roman and Byzantine periods.

“There is no doubt that Ain al-Auja and its spring are marginalized and neglected. It is located in Area C, which is outside the direct control of the Palestinian Authority. Israel has always sought to annex this area and place it under its political, security and military administration,” he noted.

Ain al-Auja was declared a nature reserve with an area of ​​12,000 dunams (2,965 acres) as part of the Palestinian government’s National Spatial Plan. The plan was adopted in 2015 by several ministries to develop the areas in the West Bank in the economic and social fields based on spatial and geographical considerations.

However, in May of this year, the Israeli authorities announced the expropriation of 22,000 dunams (5,436 acres) of land in the area, including the 12,000 dunums of the Palestinian nature reserve in Ain al-Auja.

For Palestinians, the Israeli decision has political and settlement implications, as it will allow Israel to control these lands and prevent Palestinians from accessing them.

Issa Moussa, director general of the General Directorate of Natural Resources at the Environmental Quality Authority, told Al-Monitor, “The 22,000 dunams that were recently expropriated in Ain al-Auja are agricultural lands. Israel first declares lands it expropriates as nature reserves, only to change this classification later and turn them into settlements and recreational areas for settlers.”

He accused Israel of preventing Palestinians from exploiting their lands, knowing that the area in Jericho and its surroundings is considered the food basket for the Palestinian people.

He said that the Environmental Quality Authority will reassess the situation in order to establish a national network of nature reserves based on international standards in line with the International Union for Conservation of Nature and the Convention on Biological Diversity, to which Palestine acceded in April 2015.

Izzat Zeidan, director of programs and projects at the Palestinian Agricultural Relief Committees, told Al-Monitor, “The spring of Ain al-Auja is the largest spring in Palestine in terms of annual water flow, with an average of 7-8 million cubic meters of water flowing from it annually.”

Zeidan said that the spring has high-quality crystal water that must be properly exploited by the Palestinians. The cultivation of the lands surrounding the spring benefits 10,000-15,000 families, he noted.

“As part of its efforts to displace Palestinians by blocking the water flow, Israel has built several settlements around the Ain al-Auja spring to control most of the water naturally flowing from the mountains of Jerusalem and Hebron. Israel also dug wells to divert the water paths of the spring to serve those settlements,” Zeidan said.

He added that the situation in Ain al-Auja is an example of Israeli practices aimed at emptying the lands of their Palestinian inhabitants.

Commenting on Israel’s expropriation of 22,000 dunums of land surrounding the spring, Zeidan explained that this procedure is different from classifying lands as a nature reserve. “When lands are classified as a reserve, the land components must not be altered or exploited in any way whatsoever. Reserves may not be built on, cultivated or exploited in any other way,” he concluded.