Palestinians were granted permits to travel to Israel for the Eid al-Fitr holiday, but larger issues remain. 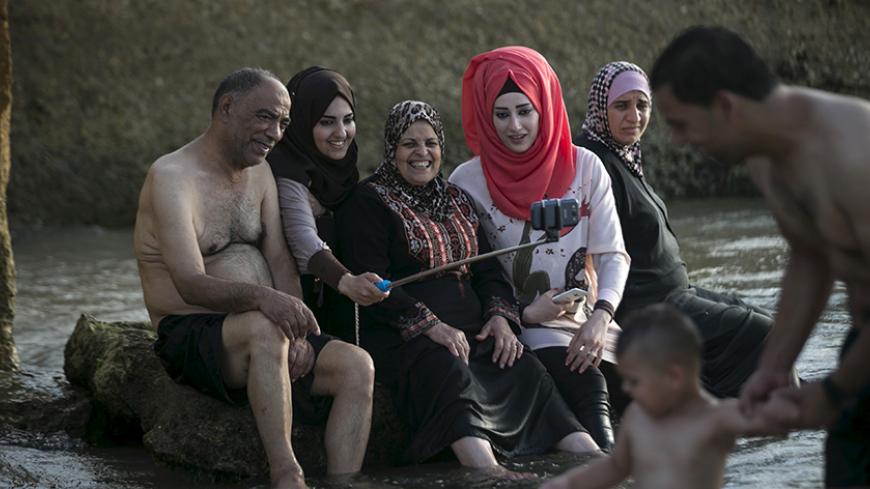 A Palestinian family takes a selfie on a beach of the Mediterranean in Tel Aviv during Eid al-Fitr, which marks the end of the holy month of Ramadan, July 19, 2015. - REUTERS/Baz Ratner

When Saja Attaiya traveled on July 19 from the Palestinian village of Beit Sira, west of Ramallah, to the Mediterranean Sea, it only took her 30 minutes to get there. Previously, her attempts to visit Jaffa and Tel Aviv had been met with restrictions and checkpoints, as Israel has rarely given travel permits to Palestinians from the West Bank to enter Israel since 2000, especially to young Palestinians.

This year, travel restrictions were eased for the Eid al-Fitr holiday, thus allowing Attaiya, 21, and thousands of Palestinians to cross into Israel and spend time at the beach. Attaiya arrived at her destination at 1 p.m. and stayed on the Mediterranean coast for 12 hours with her fiance Mohammad Flaneh, her brother Taleb and her cousin Mohammad, both 16, as well as thousands of others who were given travel permits for the holiday.

“No one understands the sea except those who are denied,” Attaiya told Al-Monitor in a phone conversation.

To get to the coast, Attaiya didn’t need a travel permit, as the Israeli authorities allowed all Palestinian women to enter into Israel during the month of Ramadan and the three-day Eid al-Fitr holiday by merely showing their ID card.

Flaneh, who works in Israel, had only been allowed to travel to Kiryat HaYovel, where he works in a local supermarket, before getting engaged to Attaiya. But now he is eligible to apply for a travel permit that allows him to travel throughout Israel with his work permit.

“When you see the sea for the first time, you forget your sorrows. It was great and it was also nice to be with someone I love. For the first time, there was only water — no stones, no soldiers and no one to make your life miserable,” Attaiya said.

In addition to the large number of Palestinians allowed to travel without a permit, which included all women and all men over the age of 40, during Ramadan and the Eid al-Fitr festivities, many others were issued travel permits, too.

According to press reports, so far this year, Israel has issued permits to 295,000 Palestinians for travel to Jerusalem and Israel during the Easter holidays, Ramadan and Eid al-Fitr. This more relaxed attitude to Palestinians from the West Bank traveling into Israel began shortly after Benjamin Netanyahu won the elections in March, partially as a response to increased global criticism of the Israeli government and the disappointment with the election result that dashed many people’s hopes for a more peace-oriented government in Israel.

Jiries Qumsiyeh, the spokesman for the Palestinian Ministry of Tourism, was quoted on July 21 by Maan News agency as saying that Palestinians from Israel were vacationing at hotels in Bethlehem and Jericho. The head of the Jerusalem Hotel Association, George Abu Aita, said that hotels in the West Bank experienced 80% occupancy during Eid al-Fitr.

While the freedom of movement during the holidays was celebrated by many media outlets with the publication of pictures of Palestinians enjoying a rare visit to the beach, the large movement of people also produced some unexpected reactions from Palestinian activists and tourism officials.

Abed Abu Diab, a local community leader in East Jerusalem, told Al-Monitor that this large number of people traveling is both good and bad. “This was good for Jerusalem’s economy, but there was no need for Palestinians to go into Israel at this time.”

Mohammed Omar, media coordinator at the Palestinian Ministry of Tourism and Antiquities, gave a similar response. “This was good and bad. It was good for people to be able to travel freely, but the majority left the Palestinian areas and spent their money elsewhere. Tens of thousands traveled to Jaffa and Jerusalem while at best a few thousand of the 1948 Palestinians came to the West Bank,” he told Al-Monitor.

Unlike previous easing of travel restrictions, this year’s holidays were different in that a large number of young Palestinians crossed the border into Israel. Political analyst Khalil Assali said that the long-term effects of the experience of young people will be extremely important.

“Politicians, including the various factions of the Palestine Liberation Organization and the isolated leadership in Ramallah, are totally out of the loop as to what is happening with young people,” Assali told Al-Monitor.

While West Bank Palestinians were granted travel permits to enter Israel, only a small number of Palestinians from the Gaza Strip were allowed to travel to Jerusalem.

Freedom to travel is a basic right that is taken for granted in most parts of the world, and after decades of travel restrictions on Palestinians, a worrisome situation has emerged, whereby Israel is making small gestures to the Palestinians, thereby ignoring the important decisions that could end the occupation. It appears that Israel has decided to manage the conflict with the Palestinians rather than solve it.