Farmers in the West Bank villages of Jinsafut and Deir Istiya have regained access to their lands in the wake of an Israeli decision that is expected to boost the agricultural sector and create thousands of job opportunities for Palestinians. 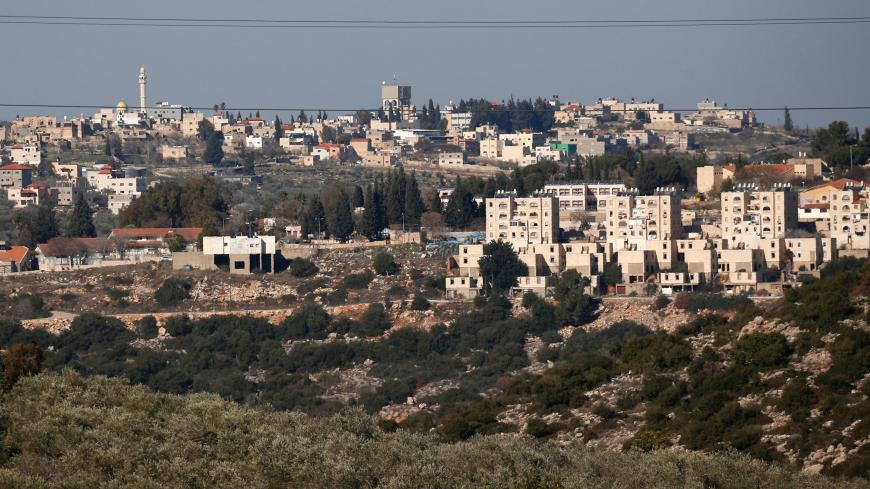 A general view from the Palestinian West Bank village of Deir Istiya shows the Israeli settlement of Alei Zahav (foreground) and the Palestinan village of Jinsafut, Jan. 23, 2017. - JAAFAR ASHTIYEH/AFP/Getty Images

GAZA CITY, Gaza Strip — The General Authority for Civil Affairs (PCA) concluded April 10 an understanding with the Israeli authorities allowing farmers in the West Bank villages of Jinsafut in Qalqilya governorate and Deir Istiya in Salfit governorate to regain access to their lands.

These farmers had been denied access to their lands for 25 years because their plots are located near the Israeli Immanuel settlement established in these villages.

According to the official Wafa news agency, PCA Director General Mohanned Shawer said that this Israeli decision is the fruit of sustained and intensive Palestinian efforts, and it will significantly contribute to helping citizens rehabilitate and exploit their lands.

Qassem Awad, director general of publication and documentation in the Wall and Settlement Resistance Committee of the PLO, told Al-Monitor, “Farmers will be reportedly given access to 79 private agricultural properties in Jinsafut and Deir Istiya.”

He explained that this decision “will create thousands of job opportunities for Palestinians and will increase the agricultural produce of the two villages, most of whose population works in agriculture. This will positively affect the economic conditions in the region.”

“Israel prevented Palestinians from developing these lands or building anything on it, as it exploited the land for the construction of settlements,” Awad said.

He pointed out that there is a settlement belt surrounding the villages of Jinsafut and Deir Istiya on the northern, western and eastern sides. This belt, which includes several settlements such as Immanuel, Karnei Shomron and Neve Oranim, has caused problems that hindered the lives of Palestinian residents. Chief among these, Awad said, is that Palestinians are denied access to 70% of the agricultural lands of Deir Istiya, as Israel built settlements or established shortcuts for settlers thereon. He added that there are agricultural lands deemed as closed security zones because they are located in the vicinity of settlements.

Muhammad Salman, a farmer and resident of the village of Deir Istiya, is very happy about the understanding that will give him access to the land he inherited from his father. “I have an agricultural land that extends over 150 dunums [37 acres], but I only had access to the part that was in Area B under PA supervision, and this part extends over 10 dunums [2.4 acres]. Most of my land falls within Area C and the occupation authorities had prevented me from reaching it since 1994 because of its proximity to the Israeli settlement of Immanuel,” Salman told Al-Monitor.

He said that his land has been subjected to many violations in the past, as its olive trees have been uprooted and wastewater from the Immanuel settlement is being channeled into it.

Salih Ayoub, a farmer and resident of the village of Jinsafut, told Al-Monitor that agriculture is the only source of livelihood for the villagers who have olive trees and who live off produce such as cucumber, wheat, barley, chickpeas and stone fruits.

Ayoub noted that while Israel prohibits farmers from accessing their lands if these are adjacent to settlements, it allows them to visit those adjacent to the PA areas twice a year provided they have a permit from the Israeli authorities.

“We sow the land the first time we visit it and we harvest our crop the second time. However any farmer in the world knows that two visits to a land are not enough to reap a good harvest,” he added.

He explained that due to the lack of sufficient care, two-thirds of the farmers’ crops is spoiled.

Said Zeidan, head of the village council in Deir Istiya, told Al-Monitor, “The decision to allow farmers to enter their lands 25 years later will encourage them to get back to work on their farms, and this would stimulate the agricultural sector in the region.”

Zeidan said that by allowing the farmers of Jinsafut and Deir Istiya to reach their land, Israel is trying to give the Palestinians a chance to restore their rural agricultural life in order to reduce the level of Palestinian attacks on Israeli targets.

He said that the Palestinian villages and towns located between Salfit and Qalqilya are like an island in a sea of settlements, and this has dealt a blow to the agriculture economy in the region.

Zeidan added that the area between Salfit and Qalqilya is important for Israel, as it is located on the second water basin in Palestine. It also contains large green areas characterized by fertile soil and is located near the Green Line separating the West Bank and Israel.

For Awad, having farmers cling to their lands is one of the best forms of popular resistance to the Israeli occupation. “This is why there are Palestinian efforts to supply the agricultural lands in Jinsafut and Deir Istiya with water and electricity,” he added.

Ayoub concluded, “Allowing the farmers of Jinsafut and Deir Istiya to have access to their lands is a Palestinian victory, but the fact remains that we suffer from a number of violations and attacks due to the settlements surrounding our lands. The settlers keep attacking farmers, and they channel wastewater from their settlements into the Palestinian agricultural lands, thus exposing them to different types of pollution.”