Palestinian volunteers have resumed the olive harvest on Gaza's border with Israel, despite the continued threat from Israeli border forces. 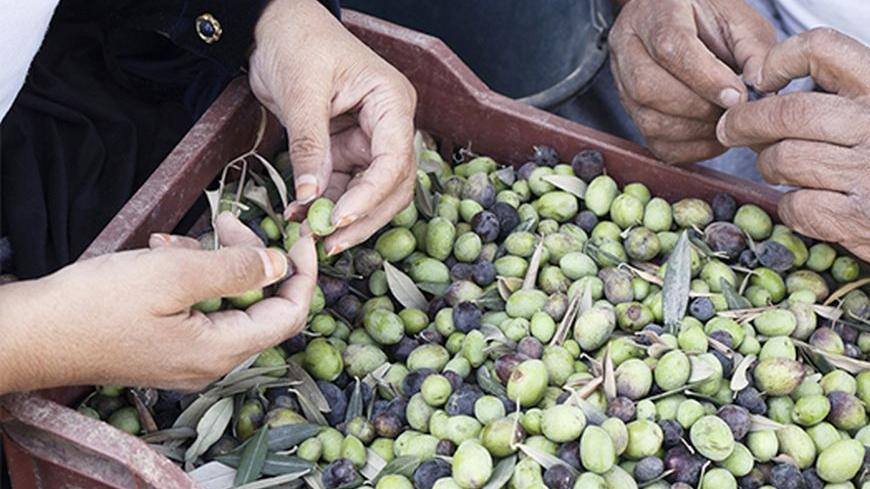 Moussa Saadat, 61, and his wife Fatima Saadat, 63, pick olives and thoroughly inspect them to see if they are damaged or not, Beit Hanoun, October 2013. - Sami Haven

BEIT HANOUN, Gaza Strip — Moussa Saadat and his wife, Fatima, pick olives and thoroughly inspect them to see if they are damaged or not. They explained to Al-Monitor that worms had infested the majority of this year’s crop.

The damaged olives, which cannot be pickled because of holes created by the worms, are thrown in a bucket to be pressed. If undamaged, the olives are placed in another bucket and used for pickling. The third bucket that contains black and undamaged olives has the smallest number.

This process of sorting olives takes days, due to the poor vision of the couple who is in their early 60s. Moussa's glasses do not help him much, and his wife refuses to wear hers, she told Al-Monitor.

The couple owns a small, green plot of land that has 13 large olive trees as well as other citrus and fig trees in Beit Hanoun in the northern Gaza Strip. “This year, our crop has been very bad and less than we expected. The majority of it was damaged by worms. It is not just our trees; the same thing has happened to the majority of growers,” Moussa said.

For her part, Fatima said that the hot weather and lack of rain had helped the worms survive and for dust to remain on the trees. “Last year, we harvested 600 kilograms [1,323 pounds] of olives from these trees. We don't even expect the harvest to reach 400 kilograms [882 pounds] this year,” she added.

The couple sells their crop to the olive oil press. “We rely on assistance provided by the Ministry of Social Affairs. The olives help us a bit, particularly since we do not own the land. It is the property of my brother-in-law, who has emigrated and allows us to harvest every year to help us make ends meet."

Moussa affirms that he feels responsible for these trees, particularly since they cannot approach the other 30 olive trees, given their dangerous location in close proximity to the border.

The border area with Israel, which the latter has dubbed the “security belt” — estimated at nearly 300 meters (984 feet) to the south and north of Gaza — is still dangerous. This is despite Israel giving up the buffer zone during the truce that was concluded under the auspices of Egypt in the war in November 2012.

On this land, there are olive trees that have not been harvested, because it is too difficult for the couple to do on their own, and their only child resides in Saudi Arabia.

Volunteers to help with the olive harvest

To help olive growers, a local initiative called Activists for Humanity and Popular Resistance, in coordination with civil society associations and institutions, has provided volunteers to help with the olive harvest in all of Gaza’s districts.

“We helped the growers in September and October harvest 150 olive trees across the Gaza Strip, mostly along the border zone. The occupation forces did not fire at us like they did last year, when we were harvesting olives in Bureij camp,” Saber Zaabeen, an official with the initiative, explained to Al-Monitor.

In the meantime, a bus arrived at the Saadat family’s land, and 50 young men and women set out to harvest olives. The delight was apparent on the couple's faces.

“If it were not for these young people, we would not have been able to harvest, and we would have had to hire workers. This means that half of the olive crop would go to paying salaries,” Fatima said. She offered the volunteers clementines as a token of her appreciation.

Houssam Radwan, director of the Youth for Culture and Development Center — an association that provides volunteers, buses and water bottles — told Al-Monitor that the campaign in the northern Gaza Strip will last for three days, to harvest olives before they are damaged further.

“The larger the number of volunteers, the faster the harvest can be completed,” he explained, noting that they are cooperating with the Jabaliya Rehabilitation Society and Activists for Humanity and Popular Resistance.

The tree and the occupation

Not far from the Saadat’s land and closer to the border, Al-Monitor met with Abu Alaa Suweilem, a farmer who recalled losing more than 45 trees when Israeli occupation forces tore them down during the 2008-09 war as well as the one that took place at the end of 2012.

“The occupation destroyed 30 dunams [7.4 acres] of land, which I inherited from my father. It has become barren land that no one can access,” Suweilem said.

According to data obtained by Al-Monitor from the Gaza Ministry of Agriculture, the occupation has destroyed 3.36 million trees and more than 70,000 dunams (17,290 acres) of agricultural land in the Gaza Strip since the beginning of the second intifada in 2000, with losses amounting to nearly $1 billion.

Suweilem pointed at his land, which has been planted with citrus, olives and peppers. “These 1.5 dunams [0.37 acres] are left. It is a bit further from the border. Yet, under the invasion or threats of invasions, I cannot access it. My neighbors were killed on their land,” he said.

He explained that the large olive trees were left by the occupation bulldozers and remained as they are. He planted the smaller ones following the 2008-09 war. “I bid farewell to each tree I plant, because I know that a war is coming to remove it from the land,” he lamented.

“The olives from this harvest season were not enough. The crop is much less than we expected. We are working on pickling some of the crop and pressing the other part [into oil],” he added. He noted that his sons and daughters help him with the harvest.

He explained that there are three types of olives. The finest type is the one that produces a large quantity of oil when pressed. “However, olive trees were almost eradicated by the bulldozer of the occupation forces,” he said.

Suweilem had barely finished his sentence when the sound of shooting broke out from the Israeli side, a common occurrence to frighten locals. “Rounds of shooting have begun, so if a stray bullet hit the trunk of an olive tree, it will dry out and die, just like men,” he quickly said.

For his part, Joseph Kodeih, an agricultural expert, told Al-Monitor that this year’s olive harvest is one-third the quantity of last year, due to the poor quality and scarcity of water as well as a lack of money to protect the trees from pests.

“Farmers on the border areas face major hardships in caring for trees, which has left most of them without any fruit,” he said.

When Moussa and Fatima had grown tired of looking at the olives, they turned to the horizon, where their inaccessible olive trees are located. They then continued to run their fingers through the olives to sort them.