Farmers in Gaza are reaping the benefits of the latest cease-fire, returning to their borderland farms after years of Israeli occupation — but how long will the peace hold, asks Rami Almeghari from Gaza. 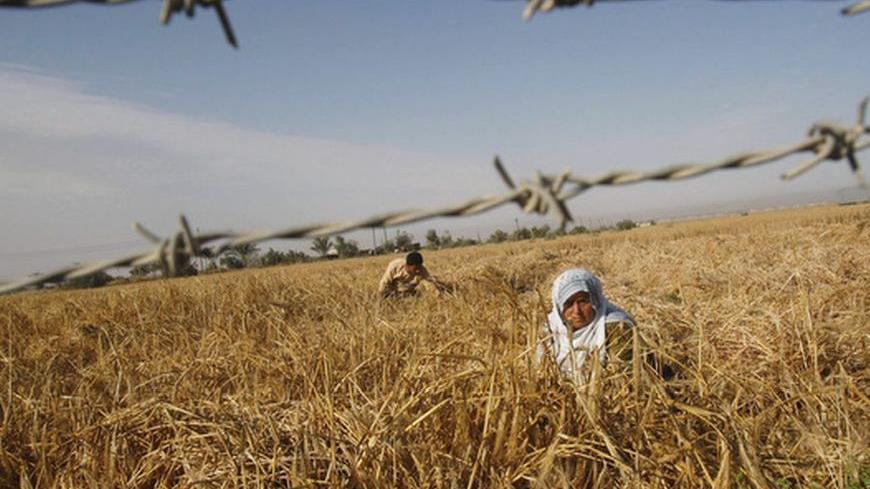 Palestinian farmers harvest wheat on a farm in Khan Younis on the southern Gaza Strip May 6, 2012. - REUTERS/Ibraheem Abu Mustafa

Almost a month has passed since Israel and Gaza-based armed factions agreed to an Egyptian-mediated ceas-fire that ended eight days of intensive Israeli strikes on the Gaza Strip.

Part of the cease-fire agreement was that Israel would ease its blockade on the Hamas-held territory. Israel has indeed relinquished control of some farmland within the Gaza Strip that had been used as a buffer zone.

Al-Monitor toured the northern and southern border areas of Gaza, where many local farmers have recently begun returning to their lands after several years of Israeli occupation.

On Tuesday, Dec. 18, Majed Wahdan, a 50-year-old local farmer from the northern village of Beit Hanoun, stepped onto his farmland for the first time in four years. Wahdan was joined by his two young sons and several other volunteers of the local Beit Hanoun Initiative for nonviolent activism against the Israeli buffer zone.

Wahdan lived and worked on this farmland for 25 years, owning a house and a well, almost 400 meters away from an Israeli military watchtower. In 2004-2005, Israeli bulldozers destroyed his house and water well, forcing him off the land.

"I feel happy now as I am returning back to my farmland after years of forceful abandonment because of the buffer zone and Israeli army shootings. I am so hopeful that I will be able at least to grow some grain crops like the wheat you see here.

“Irrigation of such grains depends mainly on rainwater, but I no longer have a well and cannot construct another for the time being. I had promises from agricultural bodies that they would reconstruct my destroyed well,” said Wahdan, pointing to the destroyed well, only a few hundred meters away from the Israeli border fence.

Another local farmer of Beit Hanoun, Ziyad Swailem, told Al-Monitor that he has not accessed his three-acre farm for 11 years, which he says has cost him $500,000 in business losses.

"Although I am very hopeful that the latest cease-fire announcement will last much longer than previous cease-fires, I don’t plan to return back to my usual farming business, mainly not planting fruit trees like strawberry or citrus. Maybe I will attempt some sort of grain crops like wheat or barley only,” Swailem said.

In the Faraheen rural area in Gaza’s southeast, many farmers like Jaber Abu Rjaila are also returning to their lands, which have not been cultivated for almost four years.

Cutting the overgrown grass on his farm, Abu Rjaila recounted to Al-Monitor the hardships he endured before the last cease-fire.

"In 2008, Israeli bulldozers swept onto my farm land and destroyed two greenhouses and a large chicken coop. Since then, I have been unable to plant any field crops like tomato or cucumber, or any citrus. I would come to my farmland with the help of some international solidarity activists. But even then, Israeli soldiers on the watchtowers would shoot at us all,” he explained.

For more than six decades, Abu Rjaila — along with his extended family — has owned 12 acres of farmland in the Faraheen area. In the past 10 years, the family has managed to cultivate less than five acres due to Israel’s buffer zone and its military actions in the area, including bulldozing and shootings.

Gaza’s agricultural ministry has been preparing a comprehensive plan for developing and rehabilitating farmlands along the border areas, with the aid of Qatari funds.

“Our first phase of the plan will include Beit Hanoun and Beit Lahiya in the north and Johr Eldiek village in central eastern Gaza. This will be done by a $2 million Qatari grant, which will enable us to pave the roads in those farming areas and reconstruct dozens of wells,” Nabil Abu Shamalla, director-general for planning and development within the ministry, told Al-Monitor.

"Actually, the last cease-fire was different from previously announced cease-fires, and we think it will have a positive impact not only on the livelihoods of farmers, but also on the overall economic scene of Gaza,” he said.

Israel’s prevention of Gaza farmers from fully cultivating their land has cost the local economy roughly $60 million, according to Shamallah.

“The land that have been abandoned by farmers due to Israeli actions and buffer zones are estimated at 6000 acres, making up 20% of fertile farmland in the occupied Gaza Strip,” he explained.

The newly freed farmland is considered to be the most fertile in Gaza due to its location in the eastern parts of the territory, unlike the sandy areas on the coast.

But the threat of renewed Israeli military activity looms over the rehabilitation plan. Shamallah called for international guarantees to stop Israel from breaking the cease-fire, thus allowing the agricultural-development plans to proceed smoothly.

"According to our records, the Israeli army have shot and wounded 15 people, mostly farmers, since the cease-fire came into effect. Therefore, we are calling for international guarantees to keep the current cease-fire sustainable,” the official said.

Talul Aukal, a Gaza-based political analyst, told Al-Monitor that unless the international community moves to act properly vis-à-vis Israeli violations against the Gaza Strip, the current cease-fire will be unsustainable.

"The matter is not confined to the buffer zone; it also extends to fishing, which is said to have been recently allowed up to six nautical miles [out]. However, Israel has not committed itself to that, since the cease-fire was announced. My expectation is that Israel will soon return to its aggression against Gaza, most likely a month after the Israeli elections,” Aukal said.

Aukal added that recent Israeli attacks on farmers in the shadow of the cease-fire were an attempt to draw the Palestinian resistance into renewed fighting, but that Palestinians will avoid responding to Israeli acts of violence for now.

"Israeli action would not take into account Egyptian involvement. Egypt’s situation is unstable and therefore, any large Israeli action will not breed a strategic response by Egypt, like annulling or modifying the Camp David peace treaty between the two states,” Aukal said.

With this in mind, Palestinian factions will be more reluctant to engage in another round of fierce fighting. But Palestinian farmers are ignoring the risks of future violence and proceeding to cultivate their lands regardless of the cost.