Camel production in Gaza is suffering from a lack of available grazing lands and continued instability with Israel, Rami Almeghari reports. 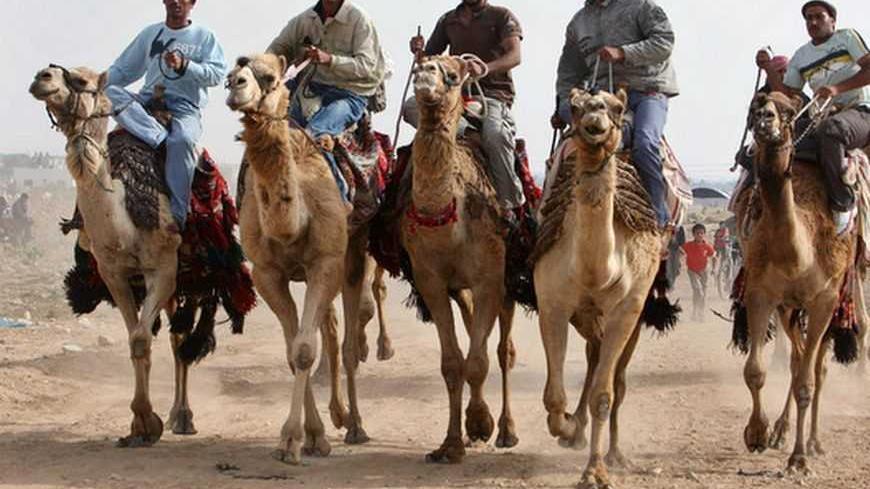 Palestinians ride camels during a competition in Dear al-Balah in the southern Gaza Strip May 15, 2009. - REUTERS/Suhaib Salem

Salama Jbara, a long-time camel rider and breeder, participated last Friday [Feb. 8] in a camel marathon near the destroyed and abandoned Gaza International Airport in the southern city of Rafah.

Salama's camel and 12 others took part in the race, which many consider here a part of the local culture that some tribes, including the Malalha, al-Semairy and Abu Amra, continue to preserve despite years of turmoil that have reduced camel production in Gaza.

"For almost 30 years now, I have been raising camels at my home in the Shuka village as I belong to the Malalha Bedouin tribe, which originated from the historical Palestinian desert city of Beer Assaba, in south Palestine, and is now called the Israeli city of Beer Sheva," Salama told Al-Monitor in the land of the Gaza International Airport, which Israel destroyed a decade ago.

Within the vicinity of the airport, 12 camels ran for the second time this year in five heats. Salama's camel did not win the race, but another Shuka village-based camel did.

"Organizing races happens often, but not regularly. It all depends on the circumstances in the territory. We managed today to bring our camels from different parts of Gaza, including Rafah, Khan Younis and Gaza City. Also, camel breeders believe in the continuity of a culture inherited from our ancestors, and this is also a chance for us all to meet each other," Salama said.

Camel racing is a common event in several Gulf states, and for Salama, it is a symbol of the desert culture.

"Three decades ago, hundreds of camels used to graze in Gaza. They came mainly from the nearby Sinai Peninsula in Egypt, when Israel occupied that Arab territory. Following the 1979 Egyptian-Israeli peace treaty, camels began to decrease here in Gaza. With the Israeli blockade of Gaza in 2007, the hundreds of camels we have here have been less able to graze, in limited space due to Israeli's restrictions on the border areas,” he said.

Animal production across the Gaza Strip continues to face a number of challenges from the Israeli occupation and blockade. According to Gaza-based agricultural bodies, the Strip’s overall animal production suffers a shortfall estimated at 75% when it comes to camels, cows and sheep.

Taha Abu Hammad, an agricultural engineer in charge of the animal production unit in Gaza’s agricultural ministry, told Al-Monitor that there’s simply not enough space in the Gaza Strip to maintain a thriving camel-production industry.

"We in Gaza do not have specific farms for animals, as animal production depends mainly on the existence of vast grazing areas, which we do not have here in Gaza,” he said.

“Camels cannot be raised on typical fodder like other animals, such as cows or sheep. Camels eat grass, even thorny grass,” Abu Hammad explained in his Gaza City office.

Abdelrahim al-Semairy, a resident of Qarara in southern Gaza, has been in his family camel business for the past six decades, since his family was forced out of Beer Assaba in the Naqab desert.

Driven from their land in 1948, descendants of the al-Semairy Bedouin tribe struggle to maintain camel production in the tiny enclave that is the Gaza Strip.

"In order for us to expand camel production in terms of meat and milk, we need vast areas of fertile land, which we have increasingly lacked due to the intensity of the conflict here. I do hope that in the shadow of recent cease-fire between Israel and Gaza-based armed factions, we will be able to use much of those lands located near the border fence with Israel in Gaza’s east," he told Al-Monitor as he milked a camel.

The agricultural ministry says that it plans to develop animal production, including camels, but this depends on stability with Israel. There are roughly 700 camels in Gaza, according to Abu Hammad, and increasing this number requires vast areas of grazing lands.

"Camel meat is rather expensive compared to other animals, and it is also said to have less cholesterol and be rich in protein. Yet we in Gaza are unable to increase or develop such a production due to lack of fertile lands. Also, camels are slaughtered for use only when they are four or five years old and by then, you can have good-quality meat,” Abu Hammad added.

Camel production represents only 2-3% of the overall animal production in Gaza and is done individually on privately owned open-spaced farmlands. Camels cannot be restricted in enclosed farms, as they cannot live on regular fodder.

"Since the advent of history, Arabs, the dwellers of the desert, used to call camels 'desert ships.’ The physical nature of camels means they eat thorny grass — and I can tell you that camels are very selective in terms of their foods, to the extent they can leave other crops entirely intact. This means that open-grazing areas are the most proper space for raising camels,” said Ehab Taha, an animal-production instructor with the agriculture ministry.

Since 2001, Israeli occupation forces established a 300-meter buffer zone inside the Gaza Strip, mainly on the eastern and northern borders of Gaza. This zone, according to the agriculture ministry, has consumed 6,000 acres of Gaza's fertile lands, constituting almost 25% of the entire agricultural lands in the Gaza Strip.