Why camels mean more than just money to Gaza's Bedouin

Bedouin families in the Gaza Strip continue to breed camels, which are considered a significant part of Bedouin tradition and an important source of income. 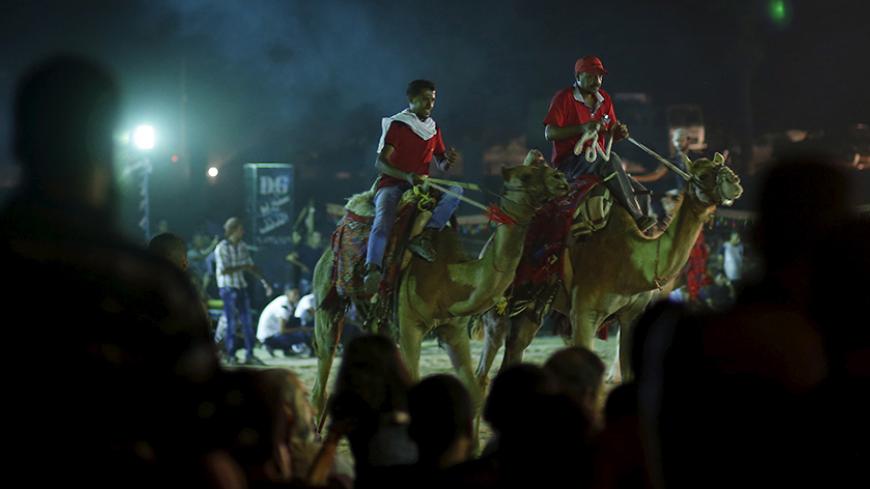 GAZA CITY, Gaza Strip — Despite the difficulties that hinder camel breeding in the Gaza Strip, such as the scarcity of green pastures and ongoing urban sprawl, Bedouin families continue to breed camels as part of their heritage. To them, camels are a source of income and livelihood, while camel yogurt is used medicinally.

Bedouin tribes at one time did not exist in Gaza, but as a result of tribal conflicts, the Bedouin tribe of Bani Amer moved at the beginning of the 18th century from the Negev desert, bringing with them many camels. The tribe settled in the eastern outskirts of the Gaza Strip, historian Naser Ismail al-Yafawi, a board member of Pal-Think for Strategic Studies, an independent Palestinian think tank, told Al-Monitor.

Every morning, Khaled al-Mousadder, who lives in the village of Masdar in the center of Gaza, rides his camel in search of green pastures. To him, this camel is his most important possession, as it represents a heritage that is difficult to give up.

As pastures are limited and Gaza’s area of 365 square kilometers (141 square miles) is small, Mousadder crosses about 4 kilometers (2½ miles) a day in search of grass and cacti to feed his camel. He also collects grass and loads it on his camel to take home for his female camel, which is nine months pregnant and still has around three months before she delivers.

Mousadder said that his family is impatiently waiting for his camel to deliver so they can sell the baby and make a profit. Six-month-old camels cost about $1,000, and the rich usually buy them to prepare banquets. Mousadder said young camels' meat is tastier than that of old camels, which no one wants to buy. Camels have an average lifespan of 25-30 years.

During the summer, nomadic families use camels for entertainment. They make money on the Gaza beach by letting vacationers ride them for a couple of minutes in return for $0.50.

Mohammed Abu Shamas from the Bedouin Sawarka tribe crosses about 20 kilometers (12 miles) every day from the city of Deir al-Balah in the central Gaza Strip, where he lives, to make money at the Gaza beach.

“Most people in Gaza are not nomads. Therefore they like to ride camels for fun, and they only need a little money. I spend about five hours helping people ride my camel, and I easily collect about 100 shekels [$25] per day,” Abu Shamas told Al-Monitor.

Camels are also an important feature of some wedding parties and Palestinian national occasions. “A lot of people opt for Bedouin aspects at their weddings. They rent trained camels for several hours to perform some dance moves in front of the public in exchange for about 70 shekels [$18],” Abu Shamas added.

For Arab Bedouin, camels constitute a fortune. Bedouin used to offer camels as a mahr — a kind of a reverse dowry in which a groom or his family gives money and possessions to a bride at the time of marriage. "Given the high value of these animals, Bedouin would also use them as ransoms to end conflicts between two families,” Abu Shamas said.

Camels also generate profit for nomadic families in other ways. For example, people buy camel milk, which some think can cure many diseases. (It should be noted, however, that the World Health Organization warns that camels, raw camel's milk and undercooked camel meat is likely to be associated with the transmission of MERS, Middle East respiratory syndrome.)

As she milked her camel in front of a house in Gaza City, Khadija Abu Bayd told Al-Monitor, “A lot of people ask to buy camel milk as a medicine for diabetes and stomach ulcers based on medical prescription.”

She explained that camels can generate 1 gallon of milk a day only, unlike cows, which can produce 8-10 gallons. This increases the price of camel milk: In Gaza, 1 quart of camel milk costs about $6, whereas a quart of cow or sheep milk does not exceed $1.

Yafawi noted the camel's importance in some religions. He said, “There is a religious link between camels and Arabs due to the female camel story of Prophet Saleh, peace be upon him, who was sent to guide the [Thamud] people in an area between the towns of Tabuk and Medina in Saudi Arabia in 3000 B.C. The Thamud people worshipped idols, and Prophet Saleh called them to worship God alone. The people disbelieved him and asked the prophet for a miracle, notably to create a female camel out of a rock. The prophet accepted and succeeded in this [mission]. Some people believed him, while another group did not and killed the camel. But God punished them and a violent earthquake struck the Thamud people; only those who believed in Prophet Saleh were spared. Therefore, camels are historically sacred to Arabs.”

He added that ever since that time, Arab tribes have boasted about having the largest number of camels. Arabs used to praise camels in poetry, and the Quran gives the example of camels in Surat al-Ghashiyah, verse 17, to show the greatness of God's creation: “Do they still not look at the camel, how it had been created?”

According to Taher Abu Hamad, director of the Animal Production Department at the Ministry of Agriculture in the Gaza Strip, there are about 800 camels in Gaza. “Bedouin families are preserving [them], which is why there is no need to import camels from abroad,” he told Al-Monitor.

Abu Hamad also addressed the issue of disease in camels. Chief among these is mange, which is caused by parasites, but he indicated that the treatment for mange is available at the Ministry of Agriculture and consists of injecting camels with Ivomec and spraying their skin with pesticides.

Bedouin families in Gaza complain about the lack of pastures and the continued urban sprawl, which are making it more difficult for them to feed their camels. This threatens the existence of an important part of Palestinian heritage and a source of livelihood for the Bedouin.